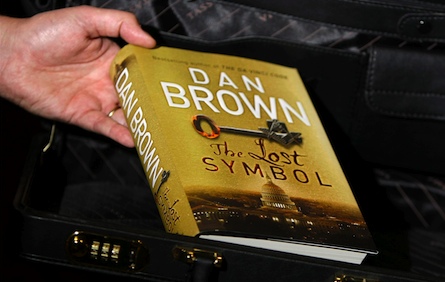 Dan Brown Day, Sept .15, 2009, dawned as auspiciously as anyone—fan, critic, quasi-disinterested cultural observer—could have hoped. The Lost Symbol finally rolled into bookshops (as well as some slightly less standard places), and everyone seemed to find something to enjoy. Brown himself, in the manner of those fortunate authors whose names appear on book jackets in letters larger than those of the title, has apparently gone all meta on us. In the most eagerly anticipated novel since Harry Potter VII, he has his hero Robert Langdon meet a female character who comments on Langdon’s scholarly exposé of the hidden codes embedded in Leonardo da Vinci’s art: “You do enjoy putting the fox in the henhouse!” That’s just what an actual female fan said to Brown about The Da Vinci Code novel of the hidden codes embedded in Leonardo da Vinci’s art. Which is to say that words once applied to a supposedly fact-based novel are now applied to a fictional non-fiction account. Deep.

In a more commercial corner of the Brown phenomenon, the price wars have been every bit as absurd as predicted. When the publishing world latches on to a good thing, one of its seemingly irresistible impulses is to sell it at a loss. To be fair though, a new Dan Brown novel simply escapes the category of “book,” and the control of booksellers. It becomes general merchandise. In Britain, a three-way battle between supermarket chains—yes, you read that right—saw the cover price of approximately $35 fall first to $15 at Sainsbury’s, and then  $12.50 at Tesco, before Asda cornered the market at $9, even as it loses an estimated $7 on every copy it sells. Soon all three stores will be handing The Lost Symbol out for free with the purchase of a bag of frozen peas. The whole process makes Amazon.com, that renowned bookshop killer, look like a piker with its British price of $17 a copy.

Others jumping on the bandwagon include the U.S. capital’s tourism arm. Unlike Parisian churches hostile to Brown-inspired tourists, Destination DC is looking forward to the rush. It launched a web page even before publication day to help readers plan their trips to places and themes expected to show up in The Lost Symbol, including the Capitol building (on the book cover) and the nearby U.S. Botanic Garden (referenced in a Today Show clue).

Popular media was hard at work leaving no Brownian stone unturned, with one enterprising journalist playing time zones to advantage by calling Masons in Australia, where Sept. 15 began hours before it did in North America. Not that they were burning with Vatican-level rage. To the contrary. Greg Levenston, Grand Master of the United Grand Lodge of New South Wales and Australian Capital Territory for the Freemasons—and an evident speed reader—pronounced his group well-pleased. “There is nothing in this book that will offend my organization.” Levinson even echoed the brave lemon-to-lemonade hopes expressed by the Catholic organization Opus Dei after the Code and its albino Opus Dei hit man swept the world. “It does give us the opportunity to open up a bit.” (In fact, local Masons were so excited by the novel’s arrival, the Sydney-based Levinson added, that they’ve started a book club. “Of course the first book we are reviewing is The Lost Symbol, I think it’s a wonderful start.”)

As for the writing itself, always grit between the teeth of Brown’s critics, it may actually have improved some. The Telegraph newspaper’s list of the 20 all-time greatest Brown clunkers includes 16 entries from The Da Vinci Code, including the title: “da Vinci” is a geographical locator, not a surname, and referring to Leonardo by it is the same as asking “What Would Of Nazareth Do? But the newspaper’s list contains only one passage from The Lost Symbol, the first chapter’s, “He was sitting all alone in the enormous cabin of a Falcon 2000EX corporate jet as it bounced its way through turbulence. In the background, the dual Pratt & Whitney engines hummed evenly.” Then again, perhaps the reviewer couldn’t get past Chapter 1, even if it is just four pages long. It’s safe to say that literary critics, who have always treated Brown with vastly more vitriol than they ever spewed on the likes of Robert Ludlum or Danielle Steele in their bestselling days of glory, won’t have to eat their words.

But enough of the fun the carpers are having. What about the Brown nation, has their man delivered what it’s been waiting six years for? On the whole, and bearing in mind that—even in America—George Washington is inherently less interesting than Jesus Christ, yes, he has. Brown has protected, even entrenched his brand. He’s upped the pace from the Code both in storyline (unfolding over 12 hours rather than 24) and in structure: 133 chapters over 507 pages of text delivers a puzzle or suspense moment every 3.81 pages, compared to its predecessor’s relatively sedate one jolt per 4.32 pages.

The same sort of Fact page that provoked much of the controversy swirling around the Code opens The Lost Symbol too (“All rituals, science, artwork, and monuments in this novel are real”); the new killer bears the same highly visible Mark of Cain—one of Brown’s weirder quirks—as the last one (tattoos this time, rather than a melanin shortfall), and Langdon’s new female counterpart is again more than she seems (although Katherine Solomon’s last name is more of a giveaway than Sophie Niveau’s). Most characters still resemble living encyclopedias, constantly spouting enormous amounts of interesting if dumbed-down history; tourist-accessible secrets are hidden in plain view in well-known architecture; ingenious puzzles abound. And the key pieces of the book—the missing mentor, grotesque corpses, hints of hidden sources of “unfathomable power”—look more than a little familiar too. It’s a mix that even Brown’s worst critics have to admit—given the sheer number of imitators who have failed to pull it off since the Code began ruling bestseller lists—that nobody pulls off as appealingly as he does.