Did you hear the one about Obama? 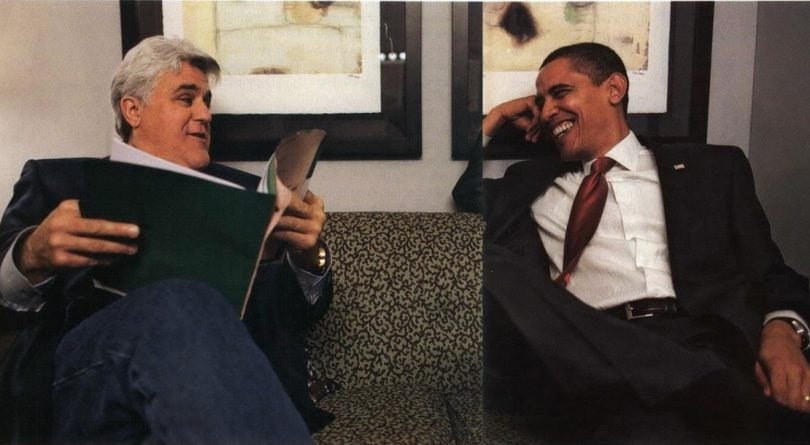 Soon after Barack Obama’s victory last November, late-night TV host Jimmy Kimmel stopped by Legends, a barbershop in L.A. He was there for a trim but also to test out, “on behalf of the comedy community,” what type of jokes about the new President the almost all-black staff and clientele considered offensive. Cracks about Obama being a bad dancer are fine, they said. So are jabs at his big ears. But, Kimmel was told, Mrs. O’s “butt” is off-limits.

The skit was a joke (a pretty good one, actually), but it illustrated a real concern among some comedians and late-night scribes heading into the Obama era. Sure, comics would be able to count on Vice-President Joe Biden to regularly stuff his foot in his mouth, but Obama, unlike most of the commanders-in-chief who preceded him, wasn’t a walking punchline. Most of the late-night hosts have publicly complained about how little the President gives them to work with. Comedian Chris Rock compared Obama to the untouchable Brad Pitt. “Ooh, you’re young and virile and you’ve got a beautiful wife and kids,” Rock told CNN. “You know, what do you say?”

ALSO AT MACLEANS.CA: Why Barack Obama is bad for Canada

For starters, how about smarter jokes? A point made by Roseanne Barr, of all people, a day after Obama earned the White House keys. Obama, she said, would “raise the level of intelligence” in comedy. No longer can late-night writers count on a president to write the show for them. The days of cutting and pasting Bushisms or one-liners about stained blue dresses into monologues were over. That, at least, was one of the promises that came with electing the junior senator from Illinois. So how then, halfway through Obama’s second 100 days, are the late-night guys coping?

Consider, for argument’s sake, the first week of June. After all, with Conan O’Brien moving into Jay Leno’s chair on The Tonight Show, it marked the greatest change to late-night in a generation. The other hosts had every reason to be on top of their games. And there was no shortage of news: the U.S. government had just taken over General Motors and Obama was back from New York, where he’d whisked the first lady away for dinner and a Broadway play on the public dime (estimates ranged between US$24,000 and US$250,000). And yet, about the best Letterman, Kimmel and O’Brien could muster, amid a series of tired jokes about Phil Spector’s hair and Dick Cheney’s point-blank range (yeah, they’re still harping on the fact the former VP shot his hunting buddy in the face), was a crack about a jumpy secret service agent wrestling a pepper shaker to the ground during the Obamas’ dinner, and how planting a garden in Donald Trump’s hair was one of the highlights of the trip for Michelle. It was the kind of material that kills at old-age homes.

In fairness, there has been some pointed humour aimed at Obama. “They’ve done a lot of jokes about the bailout, some jokes about how he’s so cool, he’s this messiah figure,” says Russell Peterson, a former stand-up comic who now teaches American studies at the University of Iowa. But too often, it seems, the President is being used to simply set up well-worn lines about dumb ol’ George W. and Bill Clinton, the horn dog. Some argue there’s a reluctance to poke fun at the boss during these tough economic times. Others have suggested that the group of middle-aged white hosts are afraid to take swipes at a black guy. “You don’t want to appear racist,” Buddy Winston, a former writer for The Tonight Show, told the L.A. Times. “You can’t do the stereotypical thing.” Then there’s the claim it’s all a big liberal conspiracy, a theory bolstered by the fact that most in the comedy business are Democrats. But all that, say experts of political humour, is a joke. What it really comes down to is the lack of an angle, an easy hook. Obama doesn’t screw around with the English language or interns, which makes him tougher to write. “It’s a telling indictment of [the mainstream network shows’] approach, which has to do with superficial things, personality stuff,” says Peterson, author of Strange Bedfellows: How Late-Night Comedy Turns Democracy into a Joke. “Obama doesn’t fit their easy way of doing things.” Even Saturday Night Live’s Fred Armisen, a master chameleon, hasn’t quite perfected Obama in the way Dana Carvey nailed Bush Sr. and Will Ferrell channelled W.

By sticking to the issues, the Comedy Central guys—namely Jon Stewart and Stephen Colbert—are doing alright. Although, Peterson says, Stewart “has gone out of his way to avoid looking like he’s in the tank for Obama to the point that he’s done some cheap, false-equivalence stuff suggesting Obama is ‘just like Bush.’ ” During the 2008 presidential campaign, Stewart and Colbert directed more jabs at Obama than John McCain, Sarah Palin and George W., according to the Center for Media and Public Affairs. And that trend continued this year. In contrast, Leno, O’Brien and Letterman told more jokes about George W. (129) than Obama (111) between Jan. 1 and March 15—arguably, the height of Obama fever. Overall, most jokes during this time frame focused on his “rock star status.”

Meanwhile, his VP has become a favourite target. “It’s almost as if Obama thought he’d toss the comedians a bone by picking Biden,” says Robert Thompson, director of the Bleier Center for Television and Popular Culture at Syracuse University. “When comedians don’t have the time or intellectual energy, they can always play the Biden card.” Trouble is, Biden jokes are a no-brainer.

Due no doubt to the President’s popularity, some hosts have faced a bit of resistance from their audiences. After one joke that didn’t go over well, Stewart explained that it is okay to laugh at Obama. Unless, of course, the jokes are in poor taste. CBC received more than 1,300 complaints following a New Year’s Eve special on Radio-Canada, which included a skit in which one of the hosts joked how a presidential assassination was made easier by the fact there’s a black man in the White House. The Canadian Broadcast Standards Council ruled it a “disturbing, wounding, abusive racial comment.”

Obama courted controversy of his own with a comedic slip, when he appeared on The Tonight Show in March and equated his bowling skills to those of special Olympians. During most late-night appearances, however, he’s seemed to be in total control, often landing some of the best lines. On O’Brien’s second night hosting The Tonight Show, he showed a clip from an interview Obama had done with NBC news anchor Brian Williams. During the sit-down, the President deadpanned that the transition from Leno to Conan had been a hot topic at the White House. “I just want [Conan] to know,” said Obama, “that there is not going to be any bailout coming out from Washington if he screws it up.” A week later, Obama was at it again, appearing via satellite on The Colbert Report. This time, the President ordered a four-star general to give Colbert a buzz cut.

Not only does Obama seem in on the jokes, he doesn’t take himself all that seriously. When critics latched on to his dependence on a teleprompter during speeches, Obama added it to his arsenal. In the opening bit of his speech at the White House Correspondents’ Association dinner last month, Obama explained that he was going to scrap his prepared speech and “try something a little different.” He was going to “speak from the heart,” he said, just as his teleprompter appeared. Ronald Reagan utilized that strategy of picking on his own weaknesses to perfection. Having repeatedly faced questions about his age (Reagan was 69, the oldest man ever to be elected president, when he moved into the White House in 1981), he used every opportunity to make fun of how ancient he was. In doing so, he undercut his opponents, so much so that when he ran for re-election, although he was four years older, age wasn’t a campaign issue.

Whether he learned tricks from Reagan or not, Obama knows how to play the game. “When SNL made fun of Ford, or H. W. Bush, it seemed like hip youngsters mocking square oldsters who didn’t understand how funny they were,” says Peterson. “Clinton and W. were boomers, but they still lacked a certain self-awareness. It seems glib to say that Obama is ‘cool,’ but he is, and that makes him a lot harder to make fun of.”

While it hasn’t happened yet, Thompson agrees that smartening things up on late-night may be “good for society.” But he doesn’t think it will translate into bigger laughs. “More substantive doesn’t mean more funny,” he says. Maybe that’s why the more mainstream hosts are holding on so tightly to George W., Clinton and, recently, Cheney, whose refusal to go away is providing comedians a “connection to those good times,” says Thompson. But it’s only a matter of time, he says, before Obama slips up. “It’s inevitable,” says Thompson, “unless we’re being governed by some divine perfection. And, as much as some people thought Obama was, he’s not.”