The first roundup of Disney+ newly released content in 2020, which features the finale of a Toy Story spin-off involving a piece of cutlery 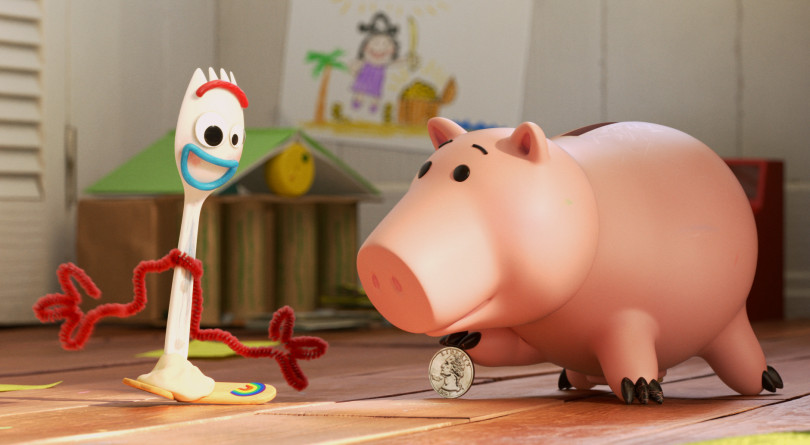 (Still from Forky Asks A Question/Disney+)

With The Mandalorian wrapped up to mixed reviews (its use of a few stand-alone episodes was a welcome change from the often ploddingly serialized storytelling of Netflix, but the approach would have worked better if the season had had more than eight episodes in it), Disney+ doesn’t have a lot of other big buzz-worthy shows at the moment, though they did recently add a new original live-action movie: the sled-dog adventure Togo, filmed in Alberta, starring Willem Dafoe, and based on the same 1925 heroic serum run that also inspired the non-Disney animated movie Balto.

Disney+ saw a lot of new content on Jan. 1, including many of Pixar’s Cars spinoff shorts, Disney’s 1930s “Silly Symphonies” (including “The Tortoise and the Hare,” whose rabbit character was one of the inspirations for Bugs Bunny), and Red Tails, the very last film made by George Lucas before he sold his company to Disney. And speaking of selling to Disney, all the Fantastic Four movies made by 20th Century Fox are being added to the service, though it’s hard to see how they could get us excited for Disney’s forthcoming reboot of the franchise.

The series with a very meta premise—a fictional TV high school puts on a musical based on TV’s High School Musical—wraps up with a two-part season finale where the musical finally opens: one episode for each act.

Jan. 3: “Opening Night” – The kids put on their musical while dealing with backstage problems.

Jan. 10: “Act Two” – After intermission (a seven-day intermission, if you’re a viewer), the play resumes, but there have been cast changes—we’ll have to watch to find out who doesn’t make it to the second act.

This wraps up the educational Toy Story 4 spinoff where the inquisitive Forky (Tony Hale) asks questions and gets answers from the likes of Buttercup, the Peas-n-a-Pod siblings, and Mr. Spell

Disney’s spinoff-mania even extends to movies they didn’t make. This show is a spinoff of the 2018 documentary by Dana Nachman and Don Hardy, about the intense but heartwarming process of training cute puppies to become guide dogs for blind people. The suspense over which dogs would or wouldn’t make the cut called one critic to dub it “Survivor with puppies,” so maybe it wasn’t such a surprise that Disney commissioned a series from the same filmmakers.

Jan. 10: “Next Level Training” – Some of the dogs advance to the next stage.

In this reality show, the casts of real-life high school musicals are reunited many years after the original production took place, and put the show on again with the help of theatre professionals.

National Geographic, another Disney acquisition, sends beloved actor Jeff Goldblum all over the map to find the secrets behind products we use every day.

Jan. 3: “Coffee” – Jeff consults experts to find out how coffee is made and why it’s so central to our lives.

Jan. 10: “Cosmetics” – Jeff finds out about the many meanings and uses of face paint, from Indigenous American ceremonies to drag shows.

Marvel’s publishing division celebrates children who are real-life superheroes in their communities, creates tie-in comics for them, and adds a Stan Lee-style superlative to each of their names.

Jan. 3: “Radiant Javera” – A young woman uses pop-up shops and other fundraising techniques to get money for struggling people in her neighbourhood.

Jan. 10: “Spectacular Sidney” – Sidney starts a program to help African-American children get interested in reading by helping them find books with protagonists who resemble them.

Each short episode of this year-long series is a profile of—and a plug for—a Disney project or the people who make them. Disney does these combination advertising/entertainment programs all the time on ABC, but at least here they don’t pre-empt other programming.

Jan. 10: “Modern Family Cast & Crew” – Now that Disney owns Fox, Modern Family is considered a Disney production, so the cast and crew of the long-running sitcom can sit down and pretend they were working at Disney all along.

Part of Pixar’s “SparkShorts” series of animated shorts that try to break new ground in some way, this is the story of two children, one of whom is identified as Pixar’s first nonverbal autistic character, who must learn to communicate when they’re set adrift together.

A Disney-synergy version of the classic “burning Yule log on a loop” videos that have been a staple of Christmas television (for those of us who either don’t have a real fire, or don’t want to turn the TV off), this is a Frozen spinoff where the yule log animation is occasionally interrupted by visits from movie characters.