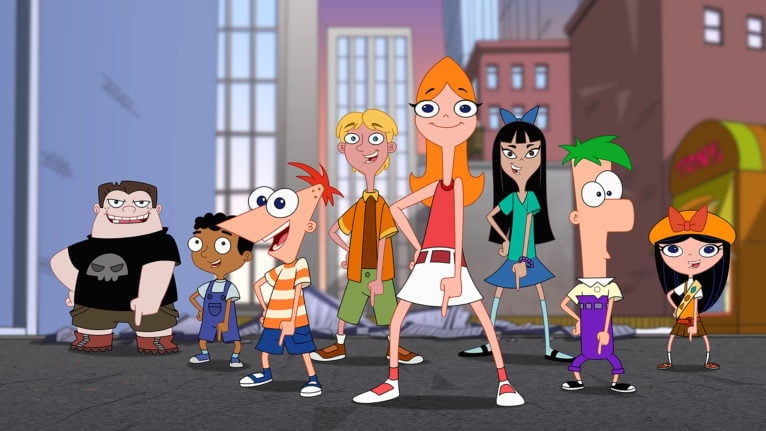 (Phineas and Ferb the Movie: Candace Against the Universe/Disney+)

One of the greatest and saddest stories in Disney history is the story of Howard Ashman, the writer and lyricist (Little Shop of Horrors) who came to Disney with his composing partner Alan Menken to co-produce and write the songs for The Little Mermaid. With that film and its follow-up, Beauty and the Beast, Ashman was hailed as the saviour of Disney animation and Broadway-style show tunes—but by the time Beauty and the Beast came out, Ashman had died of AIDS, halfway through writing the score for Aladdin. In this documentary, Beauty and the Beast producer Don Hahn uses archival footage and interviews with Ashman’s family and colleagues to celebrate Ashman’s life and career, a celebration tinged with sadness about all the work he never got to do.

This family film, directed by Mark Waters, stars Adam DeVine as a washed-up magician who takes a job at a magic camp and pulls together a ragtag team of young hockey players… I mean, magicians. The film was made several years ago and originally scheduled for a 2018 theatrical release, but eventually wound up going direct to Disney+.

The One and Only Ivan (Friday, August 14)

Thea Sharrock (Me Before You) directed this adaptation of the Newberry-Medal-winning novel by Katherine Applegate. Using a mix of live-action footage and CGI animation, the film tells the story of Ivan the gorilla (voiced by Sam Rockwell) and other talking animals who are resigned to living in captivity in a shopping mall… until the arrival of a baby elephant named Ruby begins to stir interest in the idea of escaping, if not to freedom, then at least to a better form of captivity. The film was originally scheduled for a theatrical release but was moved to Disney+ due to the pandemic.

Phineas and Ferb the Movie: Candace Against the Universe (Friday, August 28)

This film, on the other hand, was always intended for Disney+, even before the pandemic: the creators of the hit animated series about the adventures of two stepbrothers (Vincent Martella and David Errigo, the latter replacing the original actor from the series) and their annoying older sister (Ashley Tisdale) were asked to create a new feature-length project directly for the streaming service, and the story involves Phineas and Ferb going into outer space to rescue their sister from an alien abduction—not realizing that she is happy to be on another planet where Phineas and Ferb aren’t always bothering her.

When plans for a bigger, more expensive Muppets series fell through, Disney substituted this semi-improvised behind-the-scenes look at putting on a Muppet show… which sounds a lot like the premise of, well, “The Muppet Show.”

Friday, August 14: “Getting Testy” —The Muppets are forced to have all their comedy submitted to a test audience… consisting entirely of Statler and Waldorf. Guests include Al Madrigal.

Friday, August 28: “The I.T. Factor” — A new update to Scooter’s computer may interfere with his attempt to upload the episode.

The very last episode of the series where families are asked to create crafts projects that double as plugs for Disney-owned franchises.

Friday, August 7: “Goofy: Pencil Cup” – For a change, the final project focuses not on a recent movie, but on Goofy, a character who hasn’t done a lot recently. Does this foretell a huge Goofy push to come? Probably not, but we can dream.

This series of Disney self-promotional shorts continues unabated, looking at Disney jobs as they were done before March 2020.

The first two seasons of this National Geographic series were from the Before Time when Disney didn’t own National Geographic. For its first original season on Disney+, Disney has brought back the same hosts, Charlie Engelman and Carly Ciarrocchi, to do 13 more episodes where they try to get kids excited to learn about the many strange and wondrous things that really happened on this planet, no Disney special effects required.

Friday, August 14: “Dinosaurs” –Carly and Charlie try to get a ticket to a movie premiere (back when there were such things as movie premieres) and this somehow leads them to learn more about dinosaur bones.

Friday, August 21: “National Parks” – Carly and Charlie turn to Yellowstone National Park rangers to arbitrate a dispute on whether a natural setting exists to be preserved as it is, or for humans to enjoy themselves in it.

Friday August 28: “Farming” – Carly and Charlie visit a factory farm in New York to learn how to move farming indoors when you don’t have enough room to grow things in the backyard.