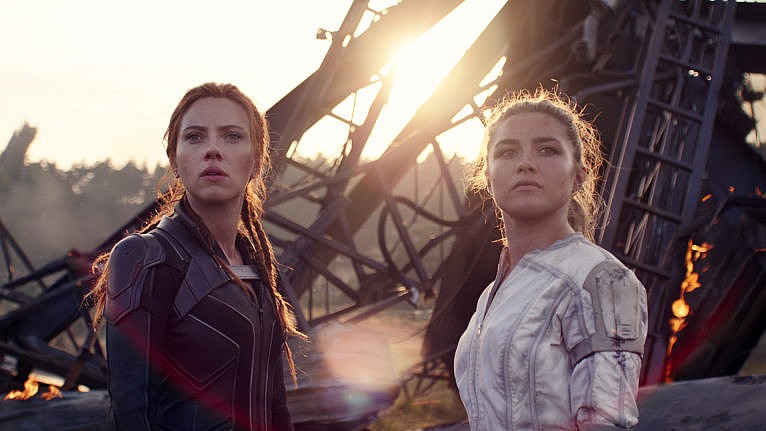 Disney is hedging its bets on movie theatres in the vaccine era. The first Marvel Cinematic Universe movie since the pandemic began, delayed for more than a year, will go to theatres, but it will be simultaneously available to stream as “Premier Access” content (i.e., subscribers will have to pay extra to see it). It’s only the second MCU movie with a woman as the sole star, and a woman who has already been killed off: in this prequel, Natasha Romanoff (Scarlett Johansson) will face a menace from her famously dark-and-troubled past, and confront a villain called the Taskmaster, who has the ability to mimic anyone else’s fighting style. The film also stars Florence Pugh as another dark-and-troubled spy who may become the next Black Widow, as Kevin Feige slowly replaces his original roster of stars with younger and less expensive (for now) actors.

It used to be that new Disney streaming content would drop on Fridays. Now, the world has changed suddenly and perhaps irreversibly: TV shows (like Loki, concluding this month) appear on Wednesdays, leaving Fridays free for feature films. This weekly half-hour show is a spinoff of the 2001 Pixar film Monsters, Inc.; it’s being hyped as the first Disney TV show based on a Pixar film, though what that means in practice is that Disney is slowly but surely draining Pixar of any claim it had to being a separate entity. Anyway, the show revolves around Tylor Tuskmon (Ben Feldman), a new arrival in the city of Monstropolis: the movie ended with the monsters deciding to become kinder, gentler monsters who didn’t need to scare children to survive, and Tylor is nonplussed at this new approach to monstering. So it’s a sequel to a film that ended in a way that precluded a sequel.

So do you remember that movie where Tom Hanks was a cop with a dog sidekick? Yes, that movie, the one people are always pointing to as an example of the kind of material he got stuck with before he reinvented himself as a dramatic actor. Well, someone at Disney looked at it and decided that was a story worth continuing in serialized television form. And “continuing” is the right word: the Turner in question is Scott Turner (Josh Peck), the son of the original Scott Turner that Tom Hanks played; that character has been killed off, possibly to avoid paying Tom Hanks for a cameo. In any case, the younger Turner inherits Hooch, a dog named after his dad’s big hilarious dog sidekick, and for some reason ends up working with him for 12 episodes. Don’t expect the original Hooch to appear, though. He died in 1992.

Behind the Attraction (Wednesday, July 21)

As a sort of prelude to his new movie Jungle Cruise, Dwayne “The Rock” Johnson is executive-producing two documentaries that will run the week before, though they’re not directly related to the movie. This is a documentary TV series (you can tell because it’s dropping on a Wednesday) about rides at Disney theme parks and the amazingly fantastic origins of those rides, including the synergy-tastic story of how a ride called “Twilight Zone Tower of Terror” was replaced with a Guardians of the Galaxy tie-in ride.

And this is a documentary film (you can tell because it’s dropping on a Friday), originally premiered in 2018, about Eddie Braun, a Hollywood stuntman who has been working in the business since at least 1980, as he talks about the dangers of a stuntman’s life and tries to perform one last death-defying daredevil stunt before he has to retire.

This is not the Robin Roberts who was a Hall of Fame pitcher for the Philadelphia Phillies. He’s dead and Disney doesn’t have him under contract. Instead, this show is hosted by the Robin Roberts who is the anchor of Good Morning America on the Disney-owned ABC Network. Each episode consists of a roundtable discussion between Roberts and three women who are famous for different reasons, as they try to get to the heart of what it means to be a trailblazing woman. Among the guests listed are Debbie Allen, Jamie Lee Curtis, Melissa Etheridge, Billie Jean King and Raven-Symoné. It’s called “Turning the Tables” because, according to Roberts, “they turn the tables on me and we turn the tables on each other.”

The saddest news of the month is that this is not a revival of “Chip ‘n’ Dale: Rescue Rangers.” Instead, the two wacky chipmunks have been given modern-day redesigns but with an old-fashioned format of seven-minute short cartoons. Because today’s cartoons are expected to have prosocial messages, Disney promises that the team will “face down bullies great and small,” instead of tormenting Donald Duck — though Pluto is expected to make appearances. The cartoons were produced by Disney’s French division, though presumably they’ll be available in multiple languages.

Mickey, on the other hand, is still big enough of a name to get his cartoons produced at Disney’s U.S. branch, and he doesn’t (yet) need a modern-day redesign. Instead this series reverts to his early design, when he didn’t need eyeballs or human-looking skin, and the seven-minute cartoons feature him and Minnie doing typical cartoony things with other A-list Disney characters like Donald Duck. However, Disney also promises that this batch of cartoons “will include stories inspired by various lands and Disney parks,” so don’t expect this to be a refuge from modern-day Disney synergy.

And finally, just as the month is nearly over, we get the Dwayne Johnson wackiness that we’ve all been waiting for. A tongue-in-cheek period adventure film in the vein of the Indiana Jones movies, but with a bit of The African Queen thrown in, it casts Johnson as a rough, tough, rugged steamboat captain who takes a prim-and-proper scientist (Emily Blunt) on a, well, jungle cruise to find the legendary Tree of Life, which is totally nothing like the Holy Grail, while fighting off attacks from animals and German bad guys (but this takes place before the Nazi era, so it’s nothing like Indiana Jones). Like Black Widow, this is being simultaneously released to movie theatres and to the “Premier Access” section of Disney Plus, which means it’s a test case to see if the company even needs to bother with movie theatres in the future.

Ahmir “Questlove” Thompson, the prolific musician and producer who co-leads the band The Roots, makes his film directing debut with a documentary about a part of music history that gets left out of standard music histories: while most of the media’s attention was focused on the Woodstock Festival in 1969, the Harlem Cultural Festival was going on, and while film cameras captured the performances, most of the footage went unreleased. So instead of the umpteenth Woodstock documentary, Questlove turns the spotlight on the performances at this festival, by stars like Stevie Wonder, Nina Simone, Gladys Knight & the Pips and Sly & the Family Stone, with new documentary footage to place the concert performances in historical context.

But for those who just can’t get enough of 1960s Boomer icons, fear not: courtesy of Hulu, Disney’s Canadian imprint has an interview with Paul McCartney (primarily known, of course, as the frontman for Wings), which lasts not one, not two, but six whole episodes! The interviewer is the record producer Rick Rubin, who was born in 1963, the year of the end of the Chatterley ban and the Beatles’ first LP, and the director is Academy Award nominee Zachary Heinzerling (Cutie and the Boxer). Can even Sir Paul be entertaining enough company to hold our attention through six episodes of two guys talking about music? Will he tell any Beatles anecdotes he hasn’t already told multiple times in the last 50 years? In its own way, it’s very suspenseful.