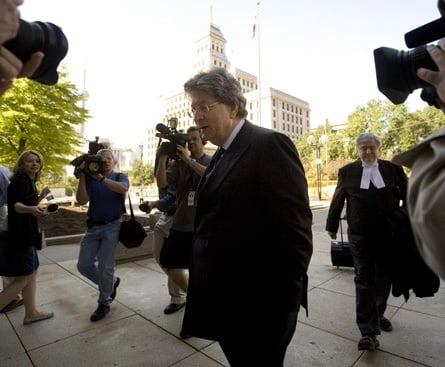 Madam Justice Mary Lou Benotto took her time this morning articulating her decision to sentence Garth Drabinsky and Myron Gottlieb to jail. The long-time business partners faced a maximum of 14 years on two counts of fraud and 10 years for forgery for bilking investors of $500 million while running Livent, the now-defunct theatrical empire  known for mounting such lavish spectacles as Phantom of the Opera, Ragtime and Kiss of the Spider Woman. Drabinsky, who Benotto called “the main person in charge,” was sentenced to four years on the first count of fraud, seven years on the second to be served concurrently. Gottlieb was handed four years on the first charge, six on the second to be served concurrently. The forgery count was stayed.

The clock ticked away—from 10:10 am to 10:45 am—as the judge outlined the sophisticated, systemic fraud, concluding that Livent’s “corporate culture was one of dishonesty.” She reviewed the sentencing arguments: the Crown proposed eight to 10 years in jail; defense lawyers Edward Greenspan and Brian Greenspan countered with a request for conditional sentences or house arrest. The Greenspan brothers even had the cojones to suggest the convicted felons could repay their societal debt by embarking on a university circuit speaking tour—Gottlieb advising students on business ethics and Drabinsky inspiring the next generation of cultural entrepreneurs—a proposal so ludicrous it could inspire theatrical parody, especially since neither has publicly expressed one shred of remorse for the crimes. Again and again, the judge made it clear it was the duty of the court to “denounce such conduct” and to “send a signal” to the business community which “must be put on notice,” she said, adding that the failure to do so “fosters cynicism and erodes public confidence in stock markets.”

Throughout her address, the judge appeared measured, deftly flicking on every argument and counter-argument to the point it wasn’t clear exactly where she’d end up. She invoked sentencing precedents in similar cases. A fellow judge was quoted on the subject of fairness: “Compassion must neither be stifled or allowed to take control.”  Yet what seeped through was the view that Drabinsky and Gottlieb were far more civilized white-collar perps than the vulgar bunch south of the border. Back in March, when she delivered her verdict, Justice Benotto claimed the Livent con wasn’t motivated by “pure greed;” she repeated that today. By that, she means the proceeds from the crime weren’t spent on gauche gold latrines or vulgar bling or other material extravagances enjoyed by Tyco and Enron executives. Rather, Drabinsky and Gottlieb mastermined the massive fraud to keep the company afloat in its grandiose style, which of course conferred glory and social stature on them. Livent was a “legitimate” business, Benotto pointed out, which is true, though its financials were anything but. It was never set up as a scam, she added, alluding to that money-grubbing Ponzi schemer Bernie Madoff. who’s serving a 150-year sentence.

Benotto also gave weight to the dozens of supportive letters written on behalf of the convicted men by friends, family and luminaries from the business and arts worlds. That these glowing endorsements didn’t jibe with the fact that Drabinsky and Gottlieb are convicted fraudsters didn’t appear to trouble the judge: she quoted praise that Drabinsky was a “visionary, generous, kind, fair, honest and trustworthy” and Gottlieb was a “fair, decent, honest person” who is “well-respected in the business community.”

Not only did Drabinsky and Gottlieb make an artistic contribution, they made philanthropic ones, the judge pointed out, as benefactors of  Mount Sinai Hospital and the Hospital for Sick Children. Whether that money was theirs to give wasn’t questioned. Much was also made of the fact both men were surrounded by people who loved them—even that Drabinsky’s first wife, the mother of his two children, sent a character reference. Gottlieb’s 42-year marriage and “close-knit, devoted family” was mentioned.

Of Gottlieb, the judge was sympathetic, remarking that he had lost “everything of material value” and has been unable to earn a living since being charged in 2002, unlike Drabinsky who has been busy with other ventures, including the CBC reality show Triple Sensation which he produces and stars. Gottlieb’s family had even lost money investing in Livent, the judge remarked, as if this fact should ramp up the pathos. But what that detail reveals is the stunning arrogance at the core of the Livent fraud: so confident was one of its architects that it would never be detected that he had his family invest in the company.

Livent was not Canada’s biggest corporate fraud. But because of its cultural prominence (heightened ironically by the long-term con), it is the country’s highest-profile corporate fraud, one that extended into the U.S. where Livent’s inflated books damaged the ecology of Broadway and ultimately ruined lives of those caught in its fall-out.

The onus indeed was on Judge Benotto to send out a strong signal, one that suggests Canadian courts take white-collar crime seriously. Not sentencing Drabinsky and Gottlieb to jail wasn’t an option given legal precedent. Sentences of seven and six years are just shy of the halfway mark between the maximum and the non-sentence requested by the defense team. Which is fitting; the decision can be seen as a halfway sentence, a safe hedge.

No one expects the two will serve out their full sentences. In Canada, first-time offenders charged with non-violent crimes are eligible for parole after one-sixth of their sentence is served. That means Drabinsky could serve 14 months, Gottlieb one year. When—and if—they’ll get to jail is another matter. They’re now free on bail awaiting their appeal, which could take years. As they were escorted by police into temporary custody today, the long-time associates betrayed no emotion. But they had to know that it was the best possible ending they could hope for even if it was banal, offering little catharsis. It would never have been acceptable in a Livent production. But those days are long over, even though some of the illusion remains.