From the archives: Why is Tim Hortons sitting out the race to build a better lid? 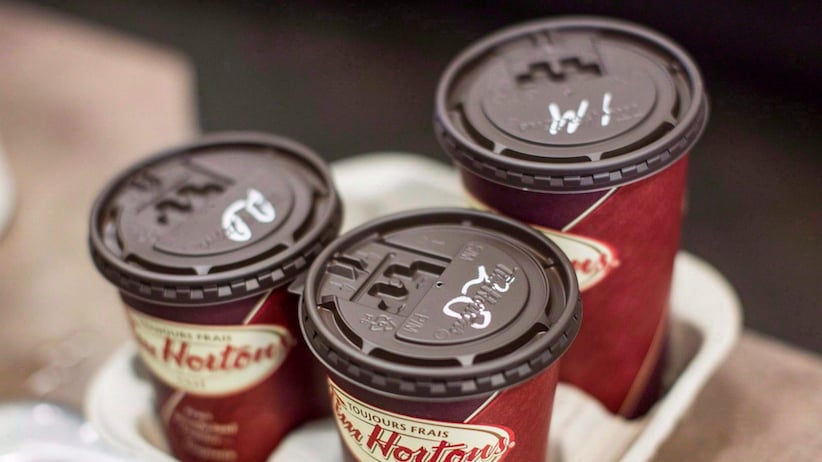 Every morning millions of bleary-eyed students, factory workers and cubicle dwellers are united in their quest for a Tim Hortons “fix.” Well, that, and the unending frustration that is the #&@% Tim Hortons coffee lid. You know what we’re talking about. The little plastic tab that’s supposed to tear back and fit snugly into the notch but tends to rip at an angle instead, leaving a jagged edge. Even if the tab tears properly, it’s always popping back up anyway. And the leaks!!! The primary function of a lid is simple enough—keep liquid and heat in the cup—yet as the dampened masses of the Tim Hortons nation can attest, the company’s lids seem specifically designed to liberate one’s beverage from the cup and send it dribbling down your hand and onto your shirt. We’ve all been there. Only, it doesn’t have to be this way.

The coffee lid has gone through a revolution in recent years. You can see that in the superior lids on offer from Tim Hortons’ many rivals. Every year dozens of new disposable lid “inventions” are filed with patent offices. Never have there been so many enterprising and reliable lid designs for restaurants to choose from—lids with raised and contoured spouts, ones that rotate to open and close, anti-spill lids engineered with chambers to keep coffee from leaking out, and even “smart” lids that function like a French press or that change colour with the temperature of your drink.

Yet, through it all, Tim Hortons has sat squarely on the sidelines. Now, even as Tim Hortons celebrates the 25th anniversary of its Roll Up The Rim contest this week, a grassroots campaign is gaining steam among Facebook users and bloggers who all share the same unrelenting message for the company: ordering a double double shouldn’t have to mean dribble dribble.

Doug Stitt, an American living in Columbus, Ohio, is one of them, though until recently he thought he was alone in his frustration. Shortly after Stitt moved to the city in the late 1990s, he fell in love with Tim Hortons coffee. The chain had only just opened up there, one of several beachheads in its effort to crack the U.S. market. Since then, Stitt, who works in design and marketing, has been a regular, stopping off at least three times a week to start his day. But as much as he craves the coffee, he loathes the lids. “They’re not just bad in one way, they’re bad in every way,” he says.

Oh, he’s tried workarounds, or as he calls it, “MacGyvering” the lids. To overcome the malfunctioning tab he sometimes cuts it off completely, though that just leaves a gaping hole through which the heat and drink escapes. (Not to mention mounds of tabs littering his car floor.) To tackle the leakage, he bought a reusable lid that he carries around with him, should the need arise. But even then, the backup lid only stops leaks sporadically.

The inadequacy of Tim Hortons’ lids has only became more pronounced as one rival chain after another upgraded their cups and lids. Not just big companies either, he notes. “You see one-off coffee shops counting pennies to make the rent and they have functioning lids,” he says. “It drives you crazy.”

Yet for years Stitt stewed largely to himself. Then a few weeks ago he decided to find out once and for all if the issue was worth the mental energy he’d expended on it. So he searched Facebook and was struck by what he found. “There are so many other people out there who feel exactly the same way. It turns out I’m not completely ridiculous.”

Far from it. As of last week, there were close to 70 Facebook groups with nearly 3,000 members railing against Tim Hortons lids. They swap lid horror stories, tips and tricks for jerry-rigging the lids, and plead with the company to find a better replacement. There are YouTube videos offering advice on how to counter the lid’s flaws. (In one, a customer explains what’s needed to achieve “spillprooficity”—just push the flap down into the cup to form a spill barrier, which is fine if you don’t mind submersing a piece of plastic who knows how many other people have touched into your drink.) And the lids have spawned countless tirades on consumer forums across the Internet. The caption on one photo of a Timmy’s cup standing in a puddle of coffee reads: “The face of the enemy.”

Tim Hortons is guarded about the issue. The company didn’t make anyone available for an interview, but Tim Hortons’ head of public affairs, David Morelli, did release a statement to Maclean’s saying internal research indicates the vast majority of customers are happy with the current style of lids. “With more than two billion cups of coffee served every year, we’re not surprised some people disagree,” he wrote, adding the company knows its customers are passionate about its products and that it takes their comments seriously. And to be fair, Tim Hortons clearly isn’t suffering from a consumer backlash—in its most recent quarter, sales were up 9.8 per cent to $670.5 million from the year before. Still, Morelli offered a flicker of hope: “Lids are an important part of the coffee-drinking experience, and we’ll continue to look for ways to improve on them.”

While the Tim Hortons lid has no doubt been called many things over the years, it would appear its patented name is “Foldback cup lid having comfortable drinking characteristics,” and it can be found in both the U.S. and Canadian patent databases. Tim Hortons wouldn’t confirm whether this patent is in fact the lid it uses, though it is identical in almost all respects to the lids used in Canada. (For specialty coffees, the company uses better lids with higher clearance and a smaller drink hole, but those drinks come with a premium price tag.)

This particular lid patent is assigned to a small Mississauga manufacturer, Amhil Enterprises, and debuted in the mid-1990s. That would place it in the paleolithic era of the lid business. At least, that’s how Louise Harpman sees it. Few people outside the beverage industry have spent as much time studying coffee lids as Harpman, a New York City architect and professor at New York University. Along with her partner, Scott Specht, Harpman has amassed the largest collection of “independently patented drink-through plastic cup lids” in the U.S., numbering at around 130. (The Museum of Modern Art can attest to that.) When shown a photo of the Tim Hortons lid, she was not impressed. “That is very much old news in the lid world,” she says. “I’m one of these people who love all things Canadian, but in this case you’re looking pretty behind the times.”

When told of the leakage problems, she proposed several theories. One is that the flat lid sits too close to the coffee, causing a capillary action in which the coffee defies gravity and rises up over the lip of the cup. She also wonders whether the lids and cups might be from different manufacturers. Whatever the case, the lid is sadly outdated, given innovations on display in new patents. “You will see references to ‘superior mouth comfort’ and ‘superior ability for leakage control,’ and this is actually inferior leakage containment and inferior mouth comfort,” she says.

The fact is, the Tim Hortons lid lags even older coffee covers. The ergonomically crafted Solo Traveler, which Harpman says touched off the coffee-lid arms race with its debut in 1986 and remains one of the most popular lids out there, is more functional than Tim Hortons’ offering. Last year Steven Heller, a New York designer, wrote in the New York Times Style Magazine that the Traveler’s spout is a “substitute for a mother’s breast—what we might call nature’s original travel lid.”

For now, all customers can do is wait and complain—but also hope. In 2009 Amhil, which appears to hold the patent for the current Tim Hortons lid, received a patent in the U.S. for a lid with a rotating stopper. The aim: “To provide a cup lid having a reduced potential for accidental spillage.”