Erin McLeod: Pitch perfect and ready for the cup 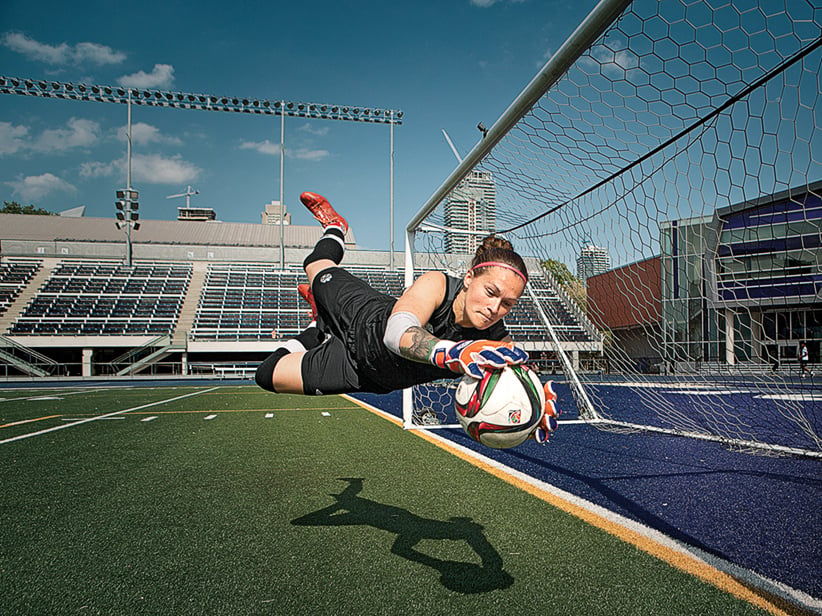 There are no words from Buddha about how to save a breakaway in soccer. He has no advice on how to run through a maze of players on a corner kick and jump with a fist flying through the air to punch away a ball. Nor can he provide any tips about where an opponent tends to shoot a penalty shot.

But as Erin McLeod travels across North America with Canada’s women’s national soccer team, on the last leg before the Women’s World Cup kicks off June 6, she’ll read a few pages of Buddha quotes every morning when she wakes up, and again before she goes to sleep. Then she’ll reflect on being present in the moment, and embracing the growth from a mistake and then letting it go.

The plight of the soccer goalie is that they are rarely in the middle of the action. They are asked to make only a handful of saves each game, but for every shot on net, the game’s fate rests in their hands.

More than 100 times, McLeod has stepped on the pitch for a game with the national team. She’s taken part in two Olympics and this will be her fourth World Cup, though only recently has she started to embrace her role as one of the team’s leaders. Rousing pre-game talks are not her specialty. “Every time I give a speech, I break down crying,” she says. Her leadership is found on the pitch.

After Canada crashed at the Women’s World Cup in 2011, losing all three of their games, McLeod bounced back at the 2012 London Olympics, as did Team Canada. The Canadians advanced all the way to the semifinals, only to face the Americans. On the back of Christine Sinclair’s hat trick, Canada led 3-2 until the most infamous six seconds in Canadian soccer history.

Late in the game, McLeod was whistled for the rarely enforced six-second goalkeeper rule for time wasting. The ensuing free kick led to a penalty shot for a handball, and then to a tie game. Canada lost in extra time.

McLeod says she’s been asked about that violation by almost every reporter leading up to the 2015 World Cup. “The thing that would have been hard for me was to believe that the team thought I let them down.” Not once, however, have any of her teammates questioned McLeod for what happened that day. “Every time it’s brought up, I’m reminded that the team backed me,” she says. “In a weird way, I’m so grateful for that six seconds.”

The team was right to trust her. Three days later, with a bronze medal on the line, France dominated with 25 shot attempts compared to Canada’s four. Thanks to McLeod’s brilliance, however, Canada walked off the pitch with a 1-0 win and an Olympic medal.

With Canada hosting the Women’s World Cup for the ﬁrst time (host cities are Vancouver, Edmonton, Winnipeg, Ottawa, Montreal and Moncton), the pressure couldn’t be any bigger, and yet McLeod doesn’t seem fazed. Not only has she kept up her relentless work ethic, she also has changed her mindset. The final stage of Erin McLeod’s evolution into one of the world’s top goalies is a sense of self-belief. Her Team Canada goalie coach, Simon Eaddy, asks regularly if she’s keeping up with her artwork. He gives her novels to read, such as Jonathan Livingston Seagull by Richard Bach, to teach her to not put limitations on herself. “It’s funny. Everyone else trusts you and you’re the last person to catch up,” McLeod says. “I’m smiling when I play now.”

BORN IN St. Albert, Alta. in 1983, McLeod moved to Calgary at the age of five, the same year the city hosted the Winter Olympics. She watched on TV with her family as Elizabeth Manley won the silver in figure skating; McLeod knew then she wanted to be an Olympian.

She climbed the local soccer ranks, eventually landing a spot on a Calgary select team as a midfielder. Once when a goalie got injured, McLeod volunteered to step in net. Not only did it feel natural to her, diving and making saves, she was really good at it. In that moment, she became obsessed with soccer.

On family trips, mom and dad were required to schedule time for Erin’s workouts. Again and again, she asked Cara to go play with her. “Every time, sure enough, we’d show up to the field and I’d have to sit at centre and shag [chase] her balls while she practised her drop kicks and goal kicks,” Cara says.

McLeod demanded more and more of herself, constantly criticizing her mistakes. “It was hard for us to watch sometimes because we knew every goal really gutted her,” says her older sister, Megan. “She’d cry after a game. And the next day, she’d go out and kick a thousand balls.”

When her dad’s work as an oil field engineer relocated the family to Indonesia, McLeod struggled with her body image. She was bigger than the other girls in her high school. If she went clothes shopping, nothing fit. So she started to skip meals. The skinnier she got, the more popular she became. If she felt hungry, instead of eating, she’d go for a workout. “Exercise anorexia, basically,” she says.

Her mom, Cheryl McLeod, couldn’t help but bawl one day at the sight of her bony daughter. “I said, ‘Erin, you’ve got to feed the engine if you want it to work.’ ” The family hired a nutritionist to help.

McLeod’s soccer skills also suffered in Southeast Asia. By her second year there, she was now considered too old to play with the boys teams and the girls-only squads left much to be desired. On summer trips back to Canada, she saw how she was falling behind. She convinced her parents she needed to move back to Calgary, where she would live with her grandmother. Pretty quickly, McLeod found her place as the starting goalie for the youth national squad.

McLeod was the most recognizable player for Canada at the 2002 Under-20 Women’s World Championship in Edmonton, thanks to her various red-and-white Mohawks. “I don’t know what prompted it,’ says Cheryl, “but I do remember being the gopher that went to find hair product in the dollar store so she could have her hair done in various forms of the Canada flag.” The hair was McLeod’s way to help motivate her team.

After they won the silver medal, McLeod got a Canada Maple Leaf tattooed on her buttocks. (A little embarrassing, she now admits.)

A good goalie is someone who makes all the saves they should, says Tim Rosenfeld, now a coach at the University of Wisconsin. A great goalie makes all the saves they should, plus a few they shouldn’t be able to make. Back in the early 2000s, Rosenfeld was coaching with Penn State University when he saw the teenage McLeod play for the first time. “She was out of control,” Rosenfeld remembers. “She’d be way up off her line going for balls she had no business going for.” Penn State wasn’t looking for a keeper at the time, however, and McLeod went to play in Texas at Southern Methodist University (SMU).

McLeod is not an imposing figure at five foot eight. Her hands are not big like a basketball player who palms a ball with ease. She is, however, so fearless that SMU’s goalie coach, Brent Erwin, often had her practice with the men’s team. “That’s when she was happiest, when the ball was hitting her in the head or hitting her in the stomach,” Erwin says. “She would not back down to any of them.”

In 2004, she transferred to Penn State, where “she’d make saves that no one in the world could make, but she’d also made decisions that allowed a bad goal,” Rosenfeld says. He told her the most important save a goalie can make isn’t the one in the 90th minute to win the game. It is the one she’s making right now. In her senior year, McLeod’s team never lost a game in regulation time.

THE LIFE of a professional athlete is precarious at the best of times, but in women’s soccer especially. The Women’s United Soccer Association, formed in 2000, folded by 2003 with $100 million in losses. The Women’s Professional Soccer League (WPS) kicked off in 2009, but folded before the 2012 season.

McLeod now plays in the National Women’s Soccer League (NWSL), which has nine teams across the U.S. and a 20-game regular season. The league offers women out of university a chance to continue their soccer careers professionally, though the pay is hardly enough for many to make a good living (the average salary for a non-national team member is around $20,000). Some teams bring in more than 14,000 fans on game day. Others might play to fewer than 1,000 fans. McLeod typically sees around 4,000 fans at home games with the Houston Dash, which hardly fills the 22,000-plus capacity at BBVA Compass Stadium.

The NWSL does allow McLeod to play against high-level competition, which helps when the World Cup or the Olympics rolls around. “There’s a confidence about her now,” says Ella Masar, a teammate with the Houston Dash, and also McLeod’s girlfriend. “When she walks on the field, there’s this duck walk when she crosses the line. She puts her feet out wide and she goes side-to-side. We joke about her swagger.”

McLEOD’s BODY is a canvas of tattoos with words of love and inspiration drawn from authors like Washington Irving and Robert Munsch. On the walls of coach Rosenfeld’s office hangs a gift McLeod gave him after she finished her tenure at Penn State. It’s a framed pencil drawing she made of a goalie glove, with a quote from Abraham Lincoln: “First I will be great, then I will get my chance.”

There is a problem with that quote, however. Lincoln never said that. Perhaps McLeod misheard the quote while at a talk or maybe the speaker was incorrect. “So he never said it?” McLeod asks, looking at a photo of her old drawing. “I should claim that quote then.”

Somehow, the words McLeod has been misquoting for years have come to represent her journey. She prepared like no other. She is now one of the great goalies on the planet. And, when she walks onto the field in front of the home crowd for the World Cup, she will get her chance.