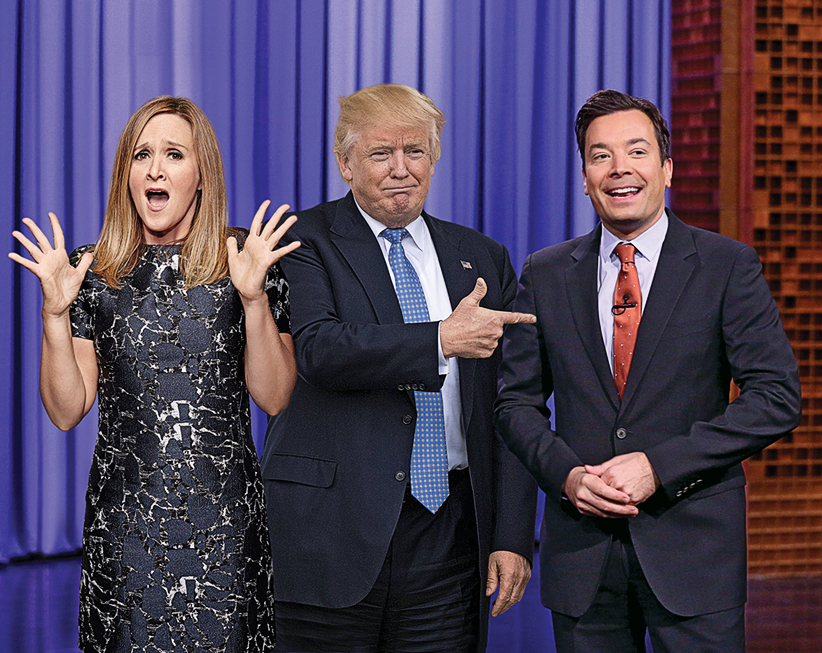 This is not going to be the 2017 that the TV industry was expecting. For the last few years, the zeitgeist in television has been based on the election of Barack Obama and the assumed election of Hillary Clinton: shows tried harder to reflect a more multicultural, socially liberal America. That America still exists and may be the future of the country. But starting next year, we’re likely to see an attempt to play catch-up with the America that elected Donald Trump. “A lot of brands y’all think of as ‘progressive’ are not,” The Atlantic’s Adam Serwer warned on Twitter. “They were responding to the Obama cultural zeitgeist. They will shift toward Trump.”

Not that we’ll see this shift right away. Trump’s victory was so unexpected that much of the TV for the first part of the year is aimed directly at liberal Millennials, like Netflix’s Dear White People, based on Justin Simien’s film about black students standing up to white privilege at a university, or Bill Nye Saves the World, starring the children’s entertainer who has become a popular voice on issues like climate change. Hulu will be unveiling a series based on The Handmaid’s Tale, Margaret Atwood’s story of a dystopian society where women are oppressed—which is now sure to inspire many thinkpieces arguing that Atwood’s vision has come true.

But the entertainment industry usually follows the election returns to some extent: after George W. Bush’s victory in 2004, there was a period when television was more conservative and pro-military (remember The Unit?). As The Hollywood Reporter’s Michael Wolff pointed out, the U.S. media has “never encountered a zeitgeist and power shift that it has not enthusiastically embraced,” especially since they need Washington’s approval for big mergers.

So we can expect 2017’s TV to start sucking up to Trump and the people who voted for him. We’re already seeing some media executives trying to get on his good side: Shari Redstone, vice-chair of CBS and Viacom, told the New York Times that Trump’s election “might be an opportunity for someone to come in and unify the country,” and that Trump “listened to a lot of voices people weren’t listening to.” That could be a sign that Viacom networks like Comedy Central and MTV will try to listen to some of those same voices.

That will almost certainly be true in the world of late-night comedy, where the success of the relatively apolitical Late Night With Jimmy Fallon—whose host was one of the few to go easy on Trump—may become the template. Though there will always be a place for the partisan rhetoric of a Samantha Bee, whose show Full Frontal will move to a new time slot in 2017, we can expect to see some comedians withdraw from the political fray: “Politics is everywhere and takes up precious brain space,” Stephen Colbert already complained.

One place to look for signs of a backlash will be the most popular and profitable TV event of all, the Super Bowl. One of the biggest stories of television in 2016 was the sudden decline of National Football League ratings by approximately 20 per cent. Some commentators, including Donald Trump himself, blamed this in part on what they considered the liberal tilt of TV’s NFL coverage, particularly quarterback Colin Kaepernick’s protests against police brutality. Expect the 2017 Super Bowl to be drenched in patriotic imagery and nostalgia to pacify viewers in red states—and expect a major controversy if the host of the halftime show, Lady Gaga, tries to speak up against the new president.

This isn’t to say 2017 will be all about backlash politics: no matter who is in power, TV networks know that targeting a more diverse audience is good for business. Still, many TV events will now seem like the end of an era. The series finale of Girls, the HBO series by Millennial creator-star Lena Dunham, will now seem like a lament for a generation that has been frozen out of power.

On the bright side, though, some shows will have a relevance that no one was expecting when they were greenlit. Like Fox’s new police drama APB, about a billionaire who literally buys control over a police district—as if rich people could just take over public institutions like that. And starting in January 2017, Arnold Schwarzenegger will become the new host of The Apprentice after it lost its star, Donald Trump. Of course, the Constitution says Arnold isn’t eligible to be the next president . . . but after a year like this, who can tell what might happen?