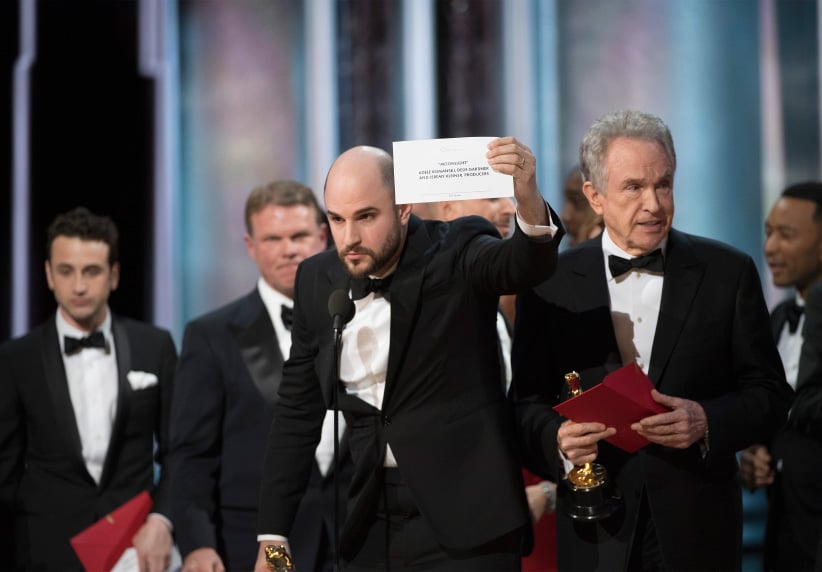 LOS ANGELES — The Academy of Motion Picture Arts and Sciences is apologizing to the cast and crews of the films “La La Land” and “Moonlight” for the mistaken announcement of the best picture winner during Sunday’s Oscars award ceremony.

The academy’s apology comes after the accounting firm responsible for the integrity of the Academy Awards, PwC, said mistakes were made and its staffers did not move quickly enough to correct the biggest error in Oscars history.

“We deeply regret the mistakes that were made during the presentation of the Best Picture category during last night’s Oscar ceremony,” the academy said in a Monday statement. “We apologize to the entire cast and crew of ‘La La Land’ and ‘Moonlight’ whose experience was profoundly altered by this error.”

The academy also apologized to presenters Warren Beatty and Faye Dunaway and to viewers.

MORE: Disaster aside, the Oscars were a win for diversity—and independence

The academy’s statement noted that PwC, formerly Price Waterhouse Coopers, has been entrusted with handling Oscar votes for 83 years but said the academy “will determine what actions are appropriate going forward.”

PwC wrote in its own statement that several mistakes were made and two of its partners assigned to the show did not act quickly enough when “La La Land” was mistakenly announced as the best picture winner. Three of the film’s producers spoke before the actual winner, the coming-of-age drama “Moonlight,” was announced.

“PwC takes full responsibility for the series of mistakes and breaches of established protocols during last night’s Oscars,” PwC wrote. It said its partner, Brian Cullinan, mistakenly handed Beatty and Dunaway an envelope containing the winner of the best actress award.

“Once the error occurred, protocols for correcting it were not followed through quickly enough by Mr. Cullinan or his partner,” the statement read.

It did not address in detail which protocols were violated, or say whether a tweet Cullinan sent about best actress winner Emma Stone before the best picture announcement contributed to the mistake.

The firm apologized to Beatty, Dunaway, the cast and crew of “La La Land” and “Moonlight,” the Academy of Motion Picture Arts and Sciences, and host Jimmy Kimmel.

“We wish to extend our deepest gratitude to each of them for the graciousness they displayed during such a difficult moment,” the statement said. “For the past 83 years, the academy has entrusted PwC with the integrity of the awards process during the ceremony, and last night we failed the academy.”

The statement came after nearly a day of speculation about the fiasco, which launched countless punchlines, memes and a probe of what went wrong.

MORE: Why the Oscars mix-up was the Academy’s worst-case scenario

The mystery deepened Monday afternoon after the Wall Street Journal reported that Cullinan tweeted a behind-the-scenes photo of Stone holding her statuette. “Best Actress Emma Stone backstage!” the tweet read. The tweet, sent moments before the best picture announcement, raised the question of whether the accountant was distracted from the task at hand. Although the tweet was deleted from the social media site, a copy of it was kept by Google and available through a cache page.

The mistaken announcement altered the usual celebration that follows the coronation of a best picture winner. The only Oscars mistake that came close occurred in 1964, when Sammy Davis was given the wrong envelope for best music score winner but made a quick correction.

The “La La Land”-“Moonlight” mix-up, in contrast, took a painfully long time to be announced, with two-plus minutes elapsing before it was announced to the moviemakers and the world at large.

The embarrassing episode stepped squarely on what should have been a night of high-fiving for the academy. After last year’s awards were clouded by the #OscarsSoWhite protests, diversity ruled Sunday as actors Viola Davis (“Fences”) and Mahershala Ali (“Moonlight”) were among the people of colour claiming trophies, while “Moonlight” focused on African-American characters.

On paper, the process for announcing Oscars winners seems straight-forward. As per protocol, Cullinan and PwC colleague Martha Ruiz toted briefcases to the awards via the red carpet, each holding an identical set of envelopes for the show’s 24 categories. The accountants also memorize the winners.

During the telecast, the accountants were stationed in the Dolby Theatre wings, one stage left and one stage right, to give presenters their category’s envelope before they went on stage. Most presenters entered stage right, where Cullinan was posted and where he handed Beatty and Dunaway the errant envelope.

Yet the previous award, best actress, had been presented by Leonardo DiCaprio, who entered stage left and received the envelope from Ruiz. That left a duplicate, unopened envelope for best actress at stage right.

“It’s a simple process, if a painstaking one,” said Dan Lyle, who had Oscar duties for 11 years in the 1980s and ’90s. Accountants attended rehearsals to learn whether presenters would enter from the right or left. But given the possibility of last-minute changes, both accountants had a full set of envelopes.

When Lyle ended up with a redundant envelope for a category handled by his colleague, he said, he got it out of the way by stuffing it in a pocket or otherwise discarding it before moving on to the next award.

If the wrong winner was announced, a PwC accountant was to quickly dash to the stage to correct the error.

Such a rapid response should have occurred Sunday but didn’t, as confusion reigned onstage. Backstage, however, people were working calmly to right the ship, said Matt Sayles, a freelance photographer for The Associated Press.

Sayles, who has shot five Academy Awards from a backstage position just out of the sight of television cameras, said the result of the mix-up was a more subdued celebration from winners including “Moonlight” director Barry Jenkins.

One observer said PwC is scrambling now. Nigel Currie, an independent branding specialist in London with decades’ worth of industry experience, said this mistake is “as bad a mess-up as you could imagine.”

“They had a pretty simple job to do and messed it up spectacularly,” he said. “They will be in deep crisis talks on how to deal with it.”