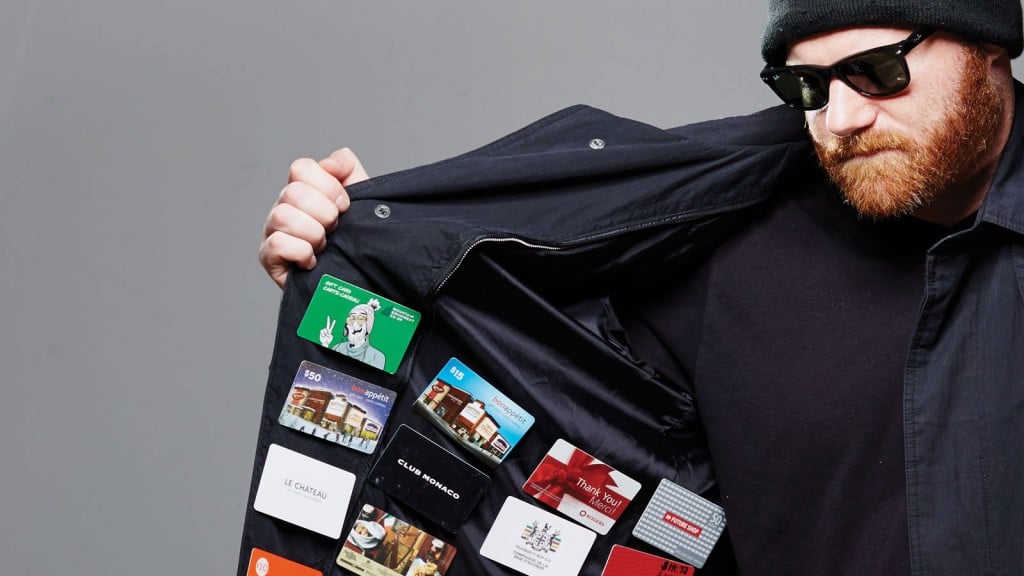 Christine Quance has been walking around with the same Pier 1 Imports gift card in her wallet for more than two years now. It was a housewarming gift—a kind gesture, she says—though perhaps not the best choice. She’s tried to use up the credit, dropping by the home decor store three or four times a year, but can never find an item that she actually wants. “I really try,” says the 28-year-old retail marketing manager from Toronto. “I just feel like I’m trying too hard to like stuff and then I feel it’s a waste of money.” Annoyed she can’t justify buying anything, she squirrels the card away in her wallet—along with the others that have been taking up space for months, even years—to use another day.

For many folks, that day never comes. Estimates for the percentage of gift-card balances that go unredeemed range from 10 to 19 per cent, according to the accounting firm Grant Thornton. The Consumers’ Association of Canada, meanwhile, says the percentage of gift cards that go unused is as high as 40 per cent—which seems high even for a time when gift cards still had expiry dates. In any case, the lost dough adds up. More than $44 billion worth of gift cards have sat unused since 2008, according to a recent U.S. study. Nevertheless, they will account for 18 per cent of all holiday spending in the U.S. by 2015, according to a 2013 report from the Corporate Executive Board.

“If you haven’t used a gift card in the first three weeks, your likelihood of using it is very low,” says Frances Ho, the Canadian behind Cardswap.ca, one of several companies that has sprouted up to offer consumers a way to get rid of gift cards. At Cardswap, a $25 gift card for Pier 1 Imports can be traded for $16.25 in cash. Don’t like that exchange rate? Try Gift Card Granny or Giftah, a company set up by three University of Waterloo students. In the U.S., Co-Ed Supply, an Ohio-based company, is offering college students the chance to swap unwanted gift cards for healthy care-package deliveries. Alternatively, Hamilton-based Giftcards For Causes collects unused cards people send in as a donation, which they in turn pass along to non-profits and charities. There’s nothing in it for the donor, financially speaking; on the other hand, the card is worthless if it goes unused anyway.

These sites “really represent the fact that something’s gone wrong between the giver’s understanding and what the recipient wants,” says Leif Baradoy, CEO of Kiind. Kiind turns its digital gift cards into an offer. If the recipient doesn’t use the card by the set expiry date, the giver is never charged on their credit card (but for a small service fee).

Jamie Floyd has five gift cards sitting on his dresser. One, for the Keg, has been there more than a year. Because they take up so much space in his wallet, the 22-year-old student at Concordia University typically leaves them at home, much to the chagrin of friends. There have been occasions when the Keg gets suggested while out on the town, but Floyd refuses to entertain that option because the gift card isn’t on him, he says. “That is one I should walk around with more often.”

Friends of Floyd can explore the app Gyft, which allows users to send gift cards via Facebook, email or text. Vello, meanwhile, is an app started by Ho that sends digital gift cards paired with videos from family or friends, an effort to personalize a gift that isn’t terribly personal. E-gift cards may lighten the load on the wallet, but they won’t help those stuck with store credit for a place they don’t like.

But that’s the gift-card conundrum. Cash may be the most practical gift, but gift givers worry it’s too impersonal, especially at Christmas. Last-second shoppers have few other options. Whatever the giver’s motivation, gift cards won’t be disappearing from store shelves anytime soon. (Or the black market—a couple from Surrey, B.C., was charged last week with fraud, including skimming rewards points from unsuspecting victims and acquiring more than $20,000 worth in gift cards.)

Ho and her cohorts don’t mind. The months around the holidays are best for business. “In November and December people are buying gift cards from us,” Ho says. “In January and February, people are selling us gift cards.”