The only living thing the swan won't charge is Lou Maieron, the owner of the fish farm where Brutus landed five years ago and has stayed since. 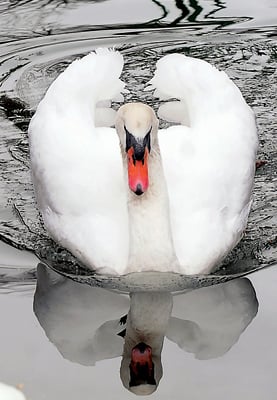 Brutus is naturally grumpy. He lowers his beak, spreads his wings and charges anything that comes near his pond, be it birds, kids or idling trucks (that one left him with a broken leg). The only living thing the swan won’t charge is Lou Maieron, the owner of the fish farm where Brutus landed five years ago and has stayed since. And the animal even hated him, until Maieron fixed his leg following the truck incident. “I’m his buddy now. He comes to me, grunts and I pet his head,” he says.

But the temperamental bird has landed Maieron in court five times. It started in 2009 when a Natural Resources inspector, on site to check Maieron’s fish farm, noticed Brutus. He reported him to a wildlife officer, who fined Maieron $180 for possessing a migratory bird without a permit. But Maieron, a seasoned biologist (and the newly elected mayor of Erin, Ont.—he figures publicity over the incident helped him win), is familiar with the Migratory Bird Act. He says the charge is baseless because Brutus arrived on his own and is free to leave. “Anybody who has ducks or geese visit their property and feeds them, according to this officer, will be charged.” He told the officer he’d buy the $10 permit, but was refused, so he went to court.

The case was initially stayed. The Crown fought that decision and won the right to an appeal, but not a new trial. “Surely you have better things to do,” Justice Norman Douglas told the Crown. But the prosecutor pressed on. The court will decide on Jan. 26 whether an appeal will be heard. Maieron then gets to go on with his life, or prepare for a full trial. “Brutus, ya bastard,” he affectionately tells the swan, ldquo;look at what I’ve got to go through because of you.”