Fresh from the press

From 2009: What you don't know about so-called 'pure' orange juice 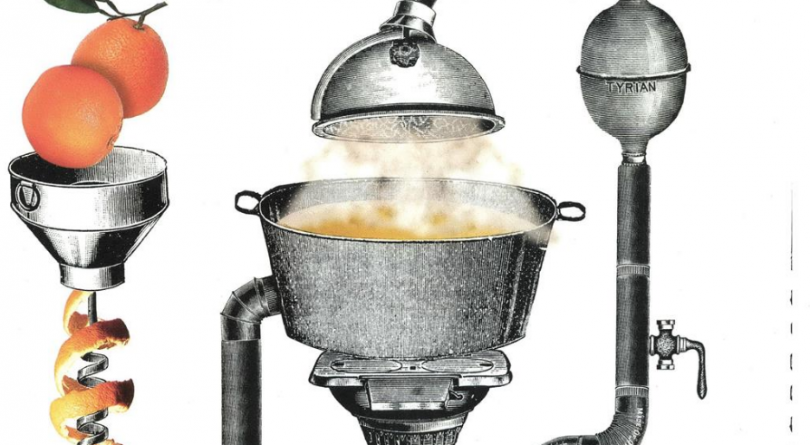 In January, 2009, Tropicana, the orange juice behemoth owned by PepsiCo Inc., made a major marketing blunder: it redesigned the carton for Pure Premium, North America’s pasteurized orange juice brand. Gone was the familiar logo of an orange skewered by a straw; in its place, a close-up of a glass of orange juice. Sales plummeted immediately. Loyal customers griped that the design made the product look like a generic store brand. Within weeks, the new look was scuppered and the image of a fresh orange was reinstated.

The packaging debacle could have been avoided had company executives only got their hands on an advance copy of Squeezed: What You Don’t Know About Orange Juice, Alissa Hamilton’s insightful history of the Florida juice industry, which also came out in 2009. They would have been reminded that consumers have long been conditioned to expect processed juice to telegraph the illusion of straight-from-the-orange freshness. The verbiage on the Pure Premium carton is typical: its contents are described as “pure and natural,” containing only “100 per cent pure squeezed orange juice.” Its production methodology is conveyed with Zen-like simplicity: “Our juice is made from fresh hand-picked oranges. Nothing added. Nothing taken away. Only oranges.”

Squeezed’s description of the manufacturing process, however, suggests “nothing added, nothing taken away” is semantic choreography of the highest order. “Not from concentrate” juice, the industry’s term for “pasteurized,” is produced by heating juice to a high temperature to kill bacteria, deactivate enzymes and extend shelf life. It’s stripped of oxygen to prevent oxidation, which removes flavour, then stored in aseptic tanks for upwards of a year. Before being packaged, flavour is reintroduced to correct deficiencies in taste, colour, or aroma—either via juice held over and stored frozen or via “flavour packs” engineered by flavour and fragrance conglomerates using orange essence and other orange parts; because they are considered “natural”—that vague, unregulated term—they don’t have to be listed in ingredients. Without these infusions, Hamilton writes, processed orange juice would be “undrinkable.”

Squeezed traces the evolution of a product said to taste like “battery acid” when it was first processed and sold in cans in the early 1900s through its unchallenged rise as North America’s favourite breakfast beverage, a staple in 70 per cent of North American homes. Technological advances were made during the Second World War in response to the military’s need for a source of vitamin C for soldiers. “War ration research provided the basis of the processed food industry,” Hamilton explains. Minute Maid frozen concentrate was introduced in 1948, too late for the war but in time to revive an ailing Florida citrus industry struggling with a surplus of fruit. Bing Crosby, the first of the industry’s long line of celebrity endorsers, crooned about its virtues. In the 1960s, Anita Bryant embodied the “all-American mother” providing a “wholesome and nutritious” product for her children. Mickey Mantle also shilled for “fresh frozen” concentrate. Despite the occasional oxymoron, the marketing of processed orange juice was so successful that consumption of fresh oranges—a healthier alternative—declined.

Squeezed devotes considerable (some will say too much) space to a seminal 1961 FDA hearing, “Matter of Orange Juice and Orange Juice Products; Definitions and Standards of Identity,” that generated more than 3,000 pages of transcripts and established the industry’s regulatory foundation. Hamilton provides glimpses of its occasional Monty Python-esque absurdity and descent into Orwellian double-speak. In one instance, the FDA denied an industry request to replace the term “pasteurized,” a process involving heat, on labels with the word “chilled” because the product is chilled when shoppers buy it.

Tweaking nomenclature has been an industry preoccupation. In the 1980s, Tropicana coined “not from concentrate” to differentiate its pasteurized product from less-expensive “reconstituted” juice made from adding water to frozen concentrate; the cheaper product, which had just arrived on the market, rivalled pasteurized for convenience and was gaining market share. Originally, Tropicana’s marketing department balked: “It’s marketing 101 that you don’t sell yourself as ‘not’ something,” says Hamilton. But consumers came to embrace the term as denoting a “better, fresher product,” even though “not from concentrate” can sit in tanks for months. The FDA refused the industry’s request to replace “pasteurized” with “not from concentrate” on labelling and insisted “pasteurized” be presented on labels in the same size print as that used for “orange juice.” “That’s why you rarely see ‘orange juice’ in big letters on the carton,” says Hamilton.

Hamilton is uniquely qualified to navigate the industry’s linguistic and regulatory mazes. The 36-year-old Toronto native studied literature at Yale, earned a law degree from the University of Toronto, then a Ph.D. in environmental studies from Yale. She’s currently a Woodcock Foundation food and society policy fellow, committed to affect food policy change and make affordable healthy food available to all. The idea for Squeezed, her first book, came while she was studying the effects of the processed food industry on major agricultural crops in the U.S. for her dissertation. The orange juice industry, now dominated by cola giants Pepsi and Coca-Cola, which owns Minute Maid, provides a classic case study: contrary to its image as a natural Florida product, the majority of production has migrated offshore to Brazil. Hamilton refers to it as a “dragon chases its tail” scenario: “The Brazil industry developed to save Florida growers hit by frost and hurricanes and has grown so beyond their control it has made them redundant.”

Orange juice also presented an appealing case study because almost everyone drinks it, says Hamilton, who admits she doesn’t—and didn’t before she wrote Squeezed. “But I eat oranges,” she offers. Yet no one sees orange juice in the same category as such synthetic wonders as Reddi-wip or Cheez Whiz. The fact it is unique as a raw agricultural commodity also makes it ripe for investigation: “Little attention is paid to processed foods that are advertised as fresh, pure and additive free,” Hamilton writes.

Orange juice is one of the few processed foods from which consumers expect the flavour of fresh, Hamilton explains, unlike canned tomatoes where a fresh taste isn’t desirable. Duplicating the complex flavour of fresh oranges has become “the holy grail of flavour people,” she writes. A brand’s “flavour pack” can make or break it. Minute Maid, for instance, is known in the industry for its “candy-like” flavour pack. But processed orange flavour has also desensitized taste buds to the real thing, Hamilton argues: “We tend not to want or even appreciate fresh.”

Squeezed doesn’t condemn processed orange juice per se. Rather, Hamilton assails the marketing that propagates the myth that it is fresh. She cites a current campaign that uses “squeezed from fresh oranges” as a catchphrase. “It’s not the same as ‘freshly squeezed’ but it sure sounds like it,” she says. “So the harried mother or father rushing through the supermarket might easily be confused.” More accuracy in advertising is needed: “I’m not saying they have to show the factories; that’ll never happen. But ‘squeezed from fresh oranges’ is misleading; technically it’s true, but it’s meaningless. I would hope it’s squeezed from fresh oranges,” she says with a laugh.

Hamilton is less surprised by the emergence of the “fresh” myth than the extent to which consumers have bought into it: “How can we have a product available 365 days of the year that has a shelf life of 60 plus days that’s fresh?” she asks.

Though far more scholarly than sensational, Squeezed is nonetheless being marketed as an investigative exposé—Fast Food Nation visits the orange grove. In December, the New York Post referred to it as a “citrus shocker.” Even before publication, the industry is in damage-control mode. Tropicana spokeswoman Jamie Stein, who read an advance copy, dismisses the book as an “outdated view of the industry” that doesn’t look beyond 2004. When asked what Hamilton has overlooked, however, Stein fails to provide examples. She’s reluctant to discuss exactly what flavours are added during production but does allow: “None are artificial; we blend back oil from the orange and the peel—similar to when you use orange zest in recipes for natural orange flavours.” Karen Mathis, the director of public relations for the Florida Department of Citrus, echoes Stein’s claim that processed orange juice is safe, nutritious and available 365 days. “We want people to understand that orange juice is a very simple product and it’s produced the way it is to make it safe and nutritious,” Mathis says. “I’m not sure consumers are taking that away when they read that book.” The industry makes orange juice in a manner “similar to how you’re making it at home,” Mathis claims, before allowing most people aren’t pasteurizing the stuff in their kitchens.

Hamilton says Squeezed was never intended to be an industry takedown, noting she received generous help from the industry while researching it. Rather, she hopes it will be a consumers’ call to arms. “People need to know not only what’s in processed food but also how it’s produced, even for a product as seemingly safe and benign as orange juice,” she says.

Already, Squeezed has forced people close to her to look at their glass of orange juice in a new way, she says. Her father has started squeezing his own. Friends have told her they’ll never drink it again because of the “flavour packs.” Hamilton shakes her head. “I tell them, ‘Look around. It’s not just orange juice. It’s everything.’ ”