At the World Stamp Show in New York, an old-world obsession proves it's very much alive 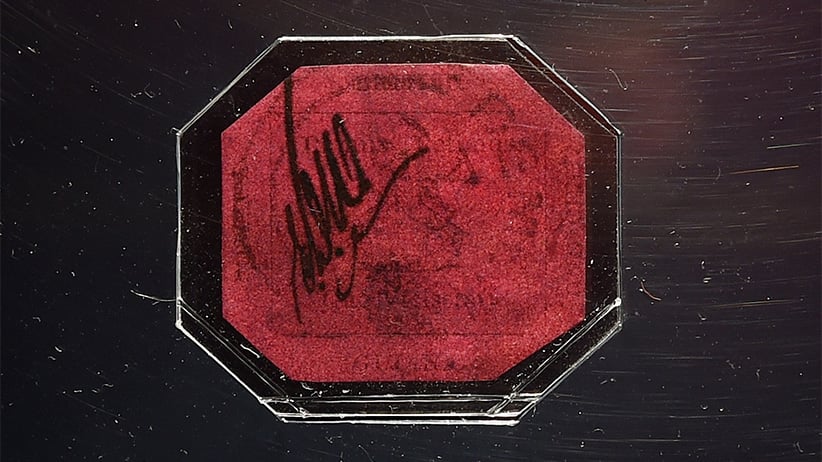 The most precious object, gram for gram, ever crafted by human hands is a flimsy little octagon of blood-red paper from the 19th century. Imprinted in a tropical outpost of empire, lost for decades, then rediscovered by a 12-year-old schoolboy, it has passed, in more recent years, from a showman to a madman to a shoe man. For $10 million or $20 million, it someday could be yours, should its owner choose to sell.

There are myriad Van Goghs and Rembrandts, and Fabergé eggs are as rampant as bedbugs, but there is only one known, surviving copy of the postage stamp known as the British Guiana One-Cent Magenta. Like Bitcoin, or the freakish red variant of aluminum oxide that gem-lovers call a “ruby,” the One-Cent Magenta, cancelled with a postmaster’s scrawl in the region of Demerara in 1856, possesses its enormous value only because a significant number of people agree that it does. This fabled scrap, imprisoned behind shatterproof glass, guarded at all hours, inspiring awe and envy wherever it goes, is the ultimate fetish of the Hobby of Kings. 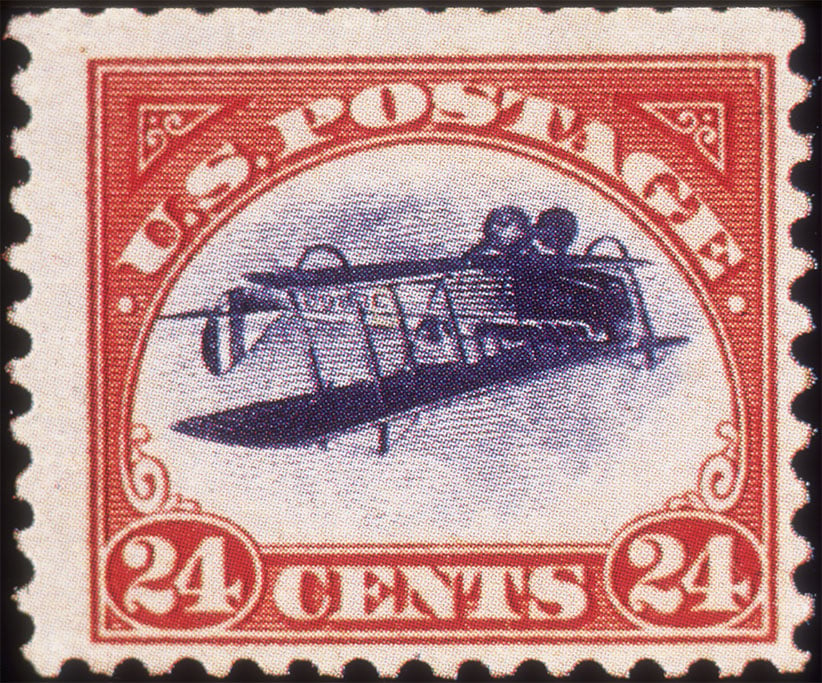 This week, thanks to the unselfishness—and the conceit—of Stuart Weitzman, the well-heeled footwear designer who purchased it at auction in 2014 for US$9.4 million to fill a blank place in his childhood album, the One-Cent Magenta can be seen at the once-in-a-decade World Stamp Show in New York City, along with hundreds of thousands of Queen’s heads and space-fillers, every one of them less unique, less thirsted-after, and less accursed. Admission is free. A quarter-million passionate philatelists and casual aficionados are expected by the show’s end tomorrow.

In New York, the One-Cent Magenta shares the Court of Honor with full panes of Britain’s pioneering “Penny Black” of 1840, and with the boyhood album, heavy with New Zealand stamps from relatives in the Antipodes, of a Liverpool boy named John Lennon, brought from Britain for display in the city where he died. There are new issues available from Liechtenstein, the Faroe Islands, and Bhutan, among other adhesive-happy micro-states, and thousands of panes of competitive exhibits that explore such topics as “Cancellations of the Canadian Province of Nova Scotia on St. Pierre and Miquelon Stamps” and “The 1961 Decimal Overprints of Basutoland.” Karl Rove, the Republican Party guru and architect of George W. Bush’s election, has put together a display of Republican campaign-advertisement envelopes from the 19th century. 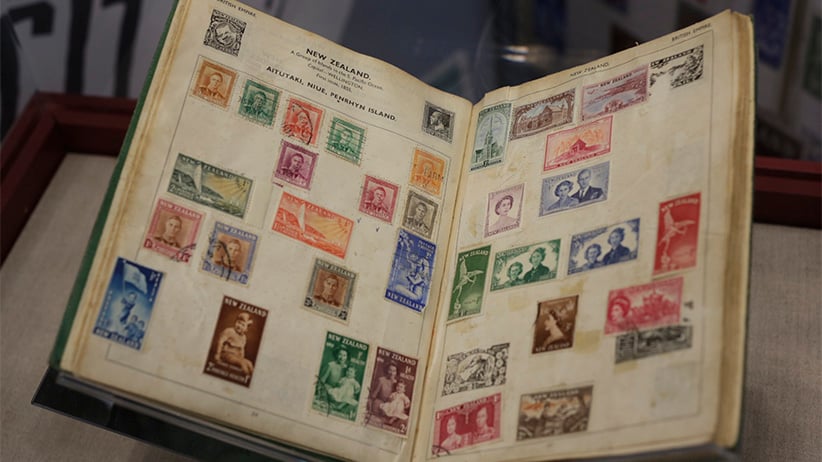 But there is only one One-Cent Magenta. Before Weitzman, the stamp was a chattel of John Eleuthère DuPont, heir to the chemical fortune. DuPont died in a Pennsylvania prison in 2010 after murdering an Olympic gold-medal wrestler; the jury found him “guilty but mentally ill.” DuPont paid US$935,000 for the One-Cent Magenta and kept it in a bank vault. Previously, it had been schlepped around the world in a briefcase handcuffed to the wrist of a promoter named Irwin Weinberg, who had paid only $280K.

“The impossible has happened,” gasped the newsletter of the Canadian Philatelic Society when the stamp was exhibited in Toronto in 1951. “Now visitors will be able to gaze upon the most expensive piece of philatelic paper known. It is reported that the present owner has turned down offers as high as $75,000 for the stamp.”

That stamp collecting survives in the 21st century—when hardly anyone ever sticks a stamp to an envelope that enfolds anything more emotive than a hydro bill—is a surprise to some, a joy to millions, and a boon to postal administrations from Canada, whose sales counter at the Javits Center in New York is being swamped by people eager for the new Star Trek issue, to the war-torn Central African Republic, which issued a souvenir sheet for this week’s New York show featuring Donald Trump in the selvage. (Not to be outdone, the Republic of Maldives has a pair of stamps for sale here with Trump and Hillary Clinton on them, fully usable for postage should you find yourself in Malé without any stamps at all.)

“ ‘Stamps and coins and stuff are in decline,’ that’s what we always hear. Not true,” says Roy Houtby of St. Catharines, Ont., one of a half-dozen prominent Canadian dealers at World Stamp Show 2016. “We’ve had a bum in every chair every day. Yes, they are mostly white-haired gentlemen. But if you had come to my booth 40 years ago, you also would have seen mostly white-haired gentlemen. These are not the same gentlemen.”

In this vein, Houtby echoes a publication named The Halifax Philatelist, which lamented, “A good many persons think stamp collecting a very foolish thing because they can see nothing to be gained from it: This results from the fact they know nothing about it.” That was in 1887.

“It’s like art, it’s personal,” says Maxime Herold of Montreal, whose Canada Stamp Finder booth offers such treasures as Canada’s 12-pence Victoria issue of 1851, priced at $72,500. (How many Canadians know that we used to use shillings and pence? Stamp collectors can tell you when the conversion to dollars and cents occurred.) “To a lot of people, it’s ‘Look what I have.’ But it is not just about money. It’s a family thing, a generational thing.”

For a century and a half, stamps offered a passport to realms as alien and inaccessible as British Guiana, and a shortcut to understanding which episodes of history deserve our commemoration. “When your Pater or Mater are doubtful as to the existence or location of any place,” that 1887 issue of The Halifax Philatelist advised children, “bring into use your knowledge and show that the time spent in collecting these stamps, has not only been pleasantly but profitably spent.” Today, of course, all of that is on your phone. Yet the hobby endures; Australia Post estimates that, worldwide, there are 22 million serious stamp collectors.

“Considering the competition that we have—the fact that virtually every movie, TV show, periodical, book, or sales catalog that has ever been made is available for our instant use—the wonder isn’t that philately has lost some popularity, it’s that it’s retained so much interest after all,” writes John Apfelbaum, a third-generation Philadelphia stamp dealer. “There is something special about our solitude with our stamps, the thrill of acquiring a needed item at an attractive price that has kept, and will keep, stamp collecting an active and important part of many people’s lives.”

Among the people whom this studious, acquisitive solitude has attracted: Maria Sharapova, Ronnie Wood, the late Freddie Mercury, former French president Nicolas Sarkozy, and Her Majesty the Queen. And of course Weitzman. “There was a big hole on the top of the page for the British Guiana,” he explained to The New York Times last year, $9.4 million poorer, yet enriched by a small flake of red.

At the World Stamp Show, from stacks of envelopes stored in a tall, locked cabinet, Roy Houtby extracts leaves of mottled paper that unveil Canada’s history in its purest, most personal form. There is a letter from Montreal, 1849:

“I am happy to say that our city is free from cholera. Margaret was very sick a month ago with bilious Dyarhea, but is now well . . .”

And another from the same city, three years later:

“It is the story of our nation, and of every nation,” says Kathy Hagendorf, whose husband, Sonny, has not one but two of the “inverted Jenny” U.S. airmail stamps of 1918 for sale at the show for about half a million dollars apiece. The Curtiss biplane in the centre of the stamp accidentally was printed upside-down. Only one sheet of 100 stamps was sold in Washington before the error was discovered, making the inverts—Scott catalogue number C3a, the object of lust for every American philatelist—though it’s still one hundred times less rare than the One-Cent Magenta.

“The question is, how can we sustain this?” Mrs. Hagendorf muses. “This whole hipster thing, these young people who seem to value craftsmanship and quality, if we can make them see the beauty and the history, then it will endure. I have seen a few Mohawks and quite a few tattoos at the show, so that gives me hope.”

To some collectors at World Show 2016, it is the stamp itself that is the prize, the mint or cancelled fillip that fills the blank place in the album, edging it one step closer to the holy grail of completion, be it the triangles of the Cape of Good Hope or the airmail surcharges of Newfoundland. To others, it is a fancy for hummingbirds on stamps, or Buddhist statuary, or Elvis, or the Boer War.

And to some, it is the contents of the envelope, not the stamp affixed to its corner, that is the quarry of the hunt. So they come to the World Stamp Show and spend days poring through dealers’ stocks of letters from the California Gold Rush of 1850—“Dear Wife and Daughter, I write to you hopping [sic] that this will find you well”—and from the doomed legions of the Confederate States of America:

We have been standing for two nights waiting for the enemy. They is no telling when the battle will begin. If I should fall on the battle field, you mus (sic) not grieve for me, for I wil (sic) die fighting for my country . . .”

A few metres away, Sonny Hagendorf is trying to sell one of his immortal Jenny inverts to a pair of white-haired gentlemen. Behind him is the Court of Honor and Stuart Weitzman’s One-Cent Magenta. But none of these, to his wife Kathy, is the most precious object ever created by human hands.

“When Sonny was a senior, I was a freshman,” Kathy says. “I was only 18, but I knew that he was the one I wanted to spend the rest of my life with. But when he graduated, he told me he was going to California for how long, he could not say.

“Along the way, he mailed me cards, and as the trip went along, it was clear that he was starting to be afraid of what he was feeling for me. By the time he got to Colorado, I knew he wouldn’t be staying out west for very long. He never made it to San Francisco, and 40 years later, we’re still together.”

“He has his inverted Jennies,” she sighs. “I still have his cards.”

“It is not the money. It is the beauty, it is respect for my former country,” a collector named Victor Fischer says. He is an immigrant to the U.S. who specializes in the early issues of Hungary, from which his family fled near the end of the Second World War.

“As we left, we were strafed by Allied planes,” Fischer says. “One of the things that my father had taken was his stamp album, but in the attack, it was partially burned. When we got to New York, he gave me those burned stamps. I still have them, of course. They are not worth anything, but they are worth everything to me.”