Gord Downie returns, not for the last time

The vaults are opening, ‘like an old friend checking in,’ on Downie's extraordinarily productive final years. 'Away Is Mine,' a new solo album, is another gift. 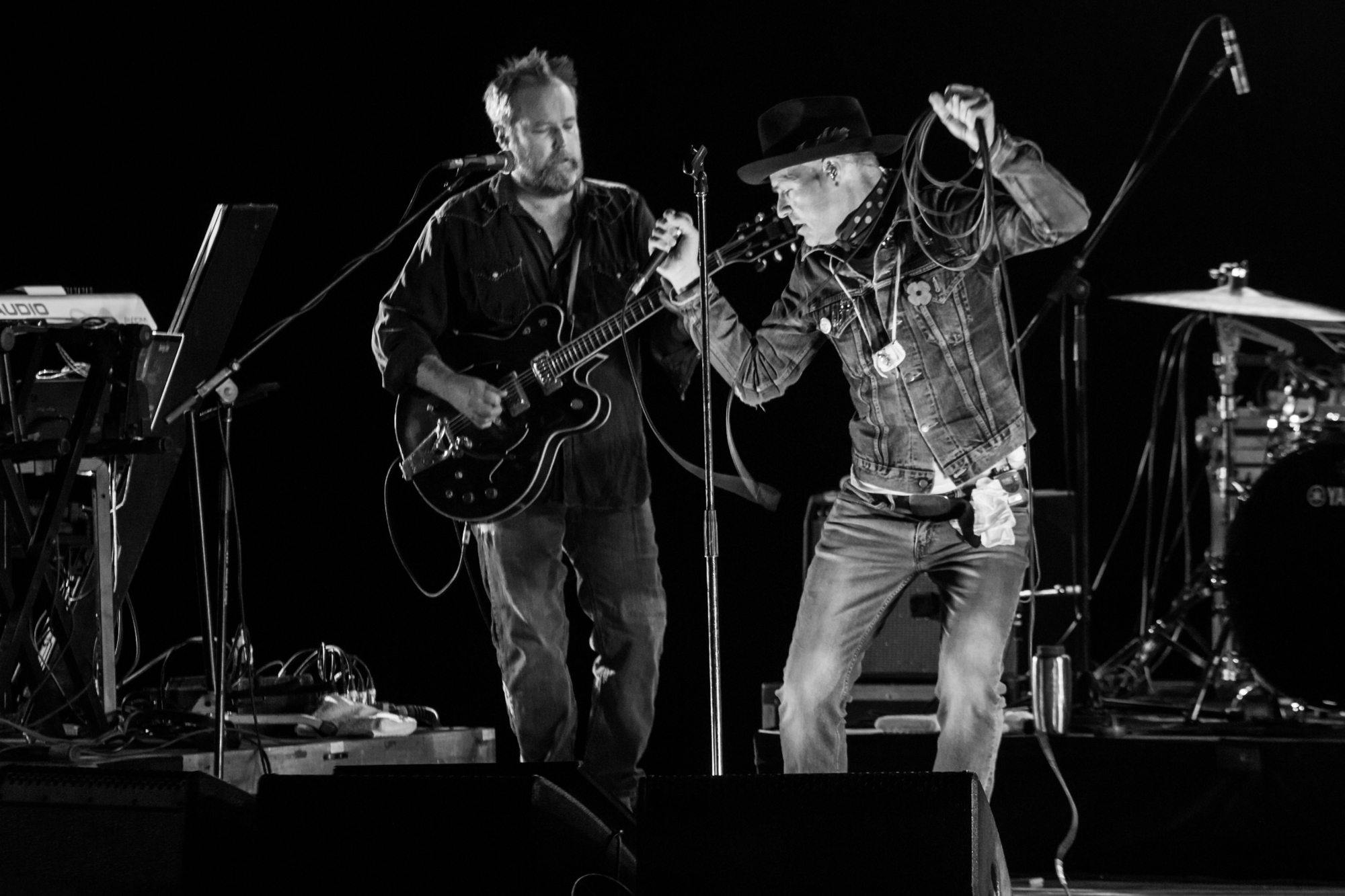 Downie and Finlayson performing together in 2016 (Lindsay Duncan/Eldie Photography)

Gord Downie is gone. Gord Downie will always be here. There’s a new solo album, Away Is Mine, which will come out this month—three years less a day after he died of brain cancer on Oct. 17, 2017. It’s not the last we’ll hear from him, but it is the last thing he did; it was recorded with the Skydiggers’ Josh Finlayson a mere three months before Downie’s death.

Though Downie became more famous in 2016-17 than he had been during his 30 years fronting the Tragically Hip, many fans don’t realize just how productive Downie was in those final two years of his life, post-diagnosis. There was the Hip tour in the summer of 2016, obviously. There was a small series of shows that fall to promote his Secret Path project. And there was the elegiac, piano-driven record he made with Kevin Drew, Introduce Yerself: a concept album in which he wrote a series of love letters to family and close friends (and one to Lake Ontario). It was released a week after he died. Many fans found it too raw to listen to at the time. Many considered it an epitaph.

But Downie had also made new recordings with eclectic Toronto roots-rock group the Sadies, following up a full-length 2014 album they did together. He improvised vocals over a furious and wild recording by his friends in avant-garde noise-rock band the Dinner Is Ruined, all of whom were part of Downie’s solo band, the Country of Miracles. He went through several iterations of writing a memoir, which he found too solitary a process. Downie wasn’t in the mood to be alone with his thoughts. The workaholic wanted to work, debilitating brain condition be damned. “It was his language, it was where he lived,” says Finlayson, of his friend’s drive to create new music. “He didn’t allow the illness to take that away from him, even though it compromised him and his memory. Right to the end.” In the words of the late Texan songwriter Townes Van Zandt, “It’s easier than just waitin’ around to die.”

Away Is Mine was co-written and performed with Finlayson, one of Downie’s oldest friends. When Downie assembled a band for his first solo album, Coke Machine Glow, recorded in June 2000, Finlayson was the first person he called. Similarly, when assembling a band to present Secret Path live in 2016, he asked Finlayson to join a group of otherwise newer collaborators.

During his final year, Downie kept in constant contact with his extended circle of friends. “He was a man of letters,” says Finlayson, “like people who used to spend the morning just corresponding with people.” In April 2017, Finlayson sent Downie some acoustic sketches he’d recorded on his phone. Downie responded within hours with lyrics and melodies. Three months later, they were in the Hip’s studio making a record over the course of a weekend. The only guests were the Sadies’ Travis Good (another relationship dating back to Coke Machine Glow); Downie’s best friend, Dave “Billy Ray” Koster; and Downie’s eldest son, Lou, on drums. Engineer Nyles Spencer added synths, drum machines and textures that make it unlike anything else in Downie’s catalogue. That said, it shares some similarities with the work Downie made after turning 50 in 2014: the reverb-drenched vocals deliver lyrics displaying humility and self-doubt. And though there’s an added element of mortality on Away Is Mine, it’s far from a sombre record. The closing track, Untitled, speaks of a “good journey, good discovery, a good plan for what’s ahead.” His daughters Willo and Clare did the artwork.

For the last three years, fans who knew about the final creative spurt have wondered when the wealth of Downie material would be released. Patrick Downie was in no rush. “I didn’t want him to be a caricature,” says Gord’s younger brother, who, three years later, is still struggling to speak for the sibling he grew up idolizing. “I didn’t want people to be sick of Gord Downie. At the same time, it is important to me to show people the depth of his talent. He isn’t just the thing that is often associated with him. I wanted to be respectful and time it right so people can hear it in the right way, and not be compulsively turned off by it. I wanted people to be in a place where it’s okay to treasure him. All I knew is that if I got this one out first, the rest will make more sense.”

Patrick Downie has a unique take on his brother’s final years. Both men split from their long-time partners in 2015, the same year their beloved father, Edgar, who’d had Parkinson’s for years, succumbed to cancer at age 84. (“Edgar dealt with it in the most zen way,” says Patrick, “even though he had no idea what that word meant.”) Days after the funeral, Gord had his first seizure, which led to the glioblastoma diagnosis. Patrick moved from Boston, where he’d lived for more than 20 years, to become his brother’s roommate and sherpa of sorts in the strangest of journeys—one that culminated in Patrick singing a Secret Path song at Massey Hall, with Broken Social Scene’s Kevin Drew on piano, less than a month after Gord died. “That was Kevin’s idea,” says Patrick, who made his vocal debut in Canada’s most hallowed hall. “I was under a weird spell. I still look back and can’t believe I did that. I didn’t really exist before any of this stuff. I was a credit-roll guy. I was never out in front of people. I’m not comfortable with it at all. When you grow up in the shadow of Gord,” he laughs, “measuring up is kind of tough—so why bother?”

RELATED: The gift of Gord Downie: ‘He gave everything he had to this world’

Gord Downie was highly visible in his last years. It helped that he always wore a uniform of a denim jacket, jeans and a baseball cap from the Minneapolis music venue First Avenue. “We had paparazzi, practically,” says Patrick, who, along with their other brother, Mike, became Gord’s spokesperson before and after his death. They’d constantly be approached in public by fans and acquaintances. “When he started to get sicker, I didn’t want to be someone else’s gossip,” Patrick says. “That was tricky. It was always a bit of an adventure when we went out. Sometimes very funny. We saw a lot of music. That was great. But when there was no show to go to, there were a lot of dark days—long and heavy days. Not a lot of people were coming over. A lot of people wanted to come over; he was in pretty heavy demand. But he hated the idea, even at the house, that he was being visited.”

Just as the days were getting darker, Finlayson entered with the spark for the Away Is Mine material. “Gord wasn’t thinking, ‘I gotta make another record before I die!’ ” says Patrick. “I mean, Introduce Yerself was a rush [for that reason], because he didn’t know what else to do. That’s the way he communicated, that was his language, and he thought, ‘Oh my god, I have all these people to thank, all this gratitude.’ That record came fast and furious.” So did Away Is Mine, but without the emotional weight involved with its predecessor.

“The world could use this kind of story, this kind of energy,” concludes Finlayson. “This album has been a great companion for me. Dealing with Gord’s illness, his death, having all these things and being with him and making this record, it was a good grieving tool, a way to honour him, and it continues to be that. It’s been three years now [since his death], which seems like a long time in some ways, but also the perfect time to put it out—global pandemic be damned. It’s like an old friend checking in.”

With the exception of the game-changing Secret Path, Gord Downie’s solo records are highly underrated, and unheard even by some huge Hip fans. In commercial terms, they paled next to the Tragically Hip’s sales figures. Oddly enough, there are some fans who still want to see a Downie front the Tragically Hip. “I can’t tell you how many people tell me I should replace Gord,” laughs the soft-spoken Patrick. “It was even Gord’s idea! At the beginning [of the diagnosis], when he was so scrambled, he was so worried about [the Hip’s] career ending, and money and everything. Then he suggested [his daughter] Willo, who can really sing.” Neither were remotely interested. Nor was the band: the iconic Canadian band is done, for all intents and purposes, even if most of them joined old friend Hugh Dillon of the Headstones on stage at a 2019 benefit in Kingston, Ont., to perform a few Hip tunes, and even if guitarist Paul Langlois sang a healthy dose of Hip material as a guest of the Skydiggers at a series of dates that same summer.

That said, the vaults are opening. The Hip reunited with original manager Jake Gold earlier this year, and they’re ready to unearth all kinds of treasures, starting with outtakes from 1991’s Road Apples. There’s also a decade-in-the-making solo album Downie made with producer Bob Rock, which is somewhere on the singer’s hard drive. We’ve hardly heard the last of him yet.

This article appears in print in the November 2020 issue of Maclean’s magazine with the headline, “Gord Downie returns.” Subscribe to the monthly print magazine here.