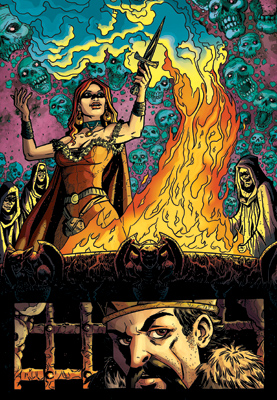 In the age of the mash-up, who better to copy and remix than the great plagiarist himself, William Shakespeare? Two Toronto writers, Conor McCreery and Anthony Del Col, have done just that with Kill Shakespeare—a 12-issue comic book series that takes a handful of Shakespeare’s most beloved and infamous characters and places them in a fantasy world with the Bard himself. The story centres around Hamlet’s quest to find his creator, the great wizard William Shakespeare. In a classic story of good versus evil, half the cast wants Shakespeare dead and the other half reveres him as their god. The series has sold close to 40,000 copies since its spring launch, garnering glowing reviews—the New York Times described it as “gripping, violent and dark fun.” And the franchise is already expanding—the creators are now working on a screenplay, a Web-based or smartphone video game, and an animated version of the comic.

McCreery and Del Col met in 2002 as business students at Wilfrid Laurier University. A year later, after seeing Quentin Tarantino’s Kill Bill, they got to chatting about other “Bills” they would kill in story form. Before long, the phrase “Kill Shakespeare” emerged, and the idea for a franchise unfurled. In 2008, just as the recession hit, the pair quit their jobs and raised $300,000 to kick off the project. “Shakespeare’s plays were meant to be performed—they’re supposed to be kinetic and visual,” says McCreery, a self-professed comics geek. “Comic books are a perfect place for that.” Kinetic and visual are fitting adjectives for the resulting work, which is a gritty, action-packed adventure. The artwork, by Andy Belanger, has a pulpy, early 1970s feel, with impossibly buxom women and a Superman jaw for Hamlet. The characters’ looks actually became a playful point of contention, explains Belanger.

“[McCreery and Del Col] wanted Angelina Jolie for Lady Macbeth but I outright refused,” he says. Instead, “I modelled her after Monica Bellucci.” As for Hamlet, the writers wanted Ryan Gosling, but what they got was closer to Clive Owen. The cinematic references weren’t without intention: Del Col and McCreery like to fantasy-cast their future film as they work on the next project—a screenplay. They plan to visit Hollywood in the spring, where they’ve already drummed up interest from some major, as of yet unnamed, production companies.

In early December, acclaimed Broadway and Hollywood director Julie Taymor mentioned Kill Shakespeare on The Colbert Report in a discussion of her latest film, The Tempest. Colbert replied, “Make that movie!” to Taymor, who laughed and responded, “Maybe.” But she had one reservation. “It’s in contemporary English, so I don’t know,” she said, gesturing two thumbs down. Indeed, the comic book’s language—what Del Col calls Shakespeare in Love English—has been the focus of the only real criticism directed at the series.

Maclean’s asked two Shakespearean experts to weigh in. James Shapiro, long-time Shakespeare professor at Columbia University, admires the effort but takes issue with the language. He points to a passage in issue eight, uttered by Richard III’s character: “We have a historical opportunity now—at this moment—to obliterate not the Prodigals, but their coward leader Shakespeare.” “That sounds like a dumb congressman from Alabama,” says Shapiro. Fellow Shakespearean scholar at Harvard, Stephen Greenblatt, isn’t so concerned. “I don’t think that mucking about with Shakespeare’s language or his stories is wicked. On the contrary, I think Shakespeare would have been amused.” Greenblatt mused that if he taught a class on contemporary transformations of Shakespeare, he would consider including it. (Shapiro, on the other hand, said he would not.)

But for the creators, winning over scholars isn’t the idea. “We welcome the debate,” says Del Col. “We like the fact that it gets people talking about Shakespeare.” They have a different kind of legacy in mind anyway. “The day we know we’ve made it,” says McCreery, “is when we go to a convention and somebody says, ‘I’m Lady Macbeth—but not issue three Lady Macbeth, I’m issue 11 Lady Macbeth.’ “