Harry Potter play kicks off a new era of obsession 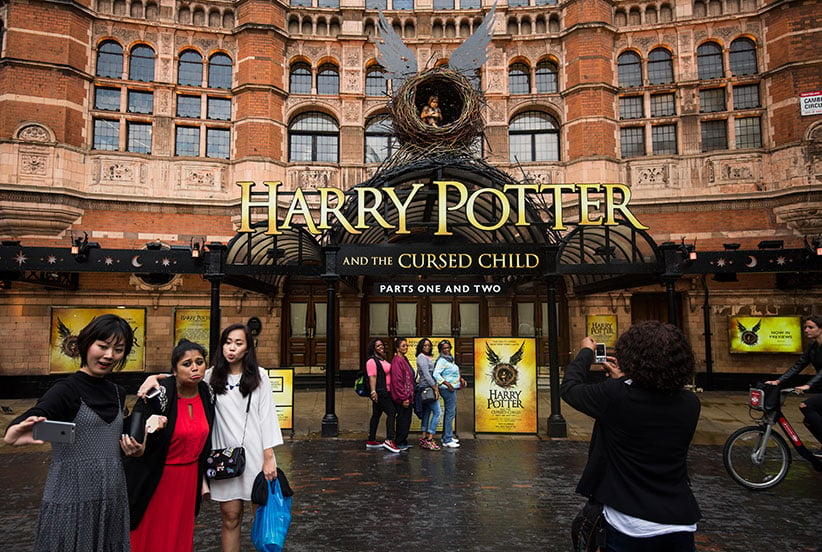 Members of the public take pictures in front of The Palace Theatre, following the first preview of the Harry Potter and The Cursed Child play last night, on June 8, 2016 in London, England. (Jack Taylor/Getty Images)

The ornately decorated Palace Theatre dominates London’s theatre district and, now, the industry, for it is home to the most talked-about stage production in the world: Harry Potter and the Cursed Child. Such is demand to see this brand-new, two-part play that some 175,000 tickets were snapped up the first day they went on sale last October. Its guaranteed success isn’t a surprise, given that more than 500 million copies of the seven-book series about “the Boy Who Lived” have been sold since J.K. Rowling plunged readers into her magical world two decades ago.

The play begins where the series ended, on Platform 9¾ of King’s Cross train station, as Harry Potter sends his younger son, Albus Severus, to Hogwarts. The plot is burnished by a clever set design that recreates the series’ iconic images: levitating broomsticks, a fully functional flue network including real flames in fireplaces, moving staircases, dementors and even the trolley lady on the Hogwarts Express. This is a production aimed at those who have devoured the series again and again. There are small references—a quip here, an allusion there—to each of the seven books. Intermissions are spent analyzing what happened, and speculating on what is to come.

The Cursed Child’s first show last Tuesday looked from the outside like a Hollywood premiere rather than a plebeian first preview performance, rife with klieg lights and TV reporters interviewing ticket holders. Inside it felt like a family reunion, albeit one with 1,400 strangers. All had to shrug off considerable envy from friends and family. “Everyone hates us,” says Stephanie LaJeunesse of Las Vegas. Securing the golden tickets last year—personalised paper tickets; no e-ticketing here, no middle men—she and two friends built a vacation around the play. For her friend Jessica VanBuren, the story is more than paper and ink. She first read the books in Grade 4, lonely after she moved to a new town until she discovered a new friend, Harry Potter. “It was the first time I realized books could be magic,” she recalls.

Rowling has specialized in that brand of literary magic. Now, nine years after she finished her landmark series with the words “All was well,” her enchanted universe is once again expanding with two new creations: The Cursed Child and a film starring Oscar winner Eddie Redmayne, Fantastic Beasts and Where to Find Them, which hits theatres in November. Booksellers are happily taking pre-orders for a book version of the play, based on an original story by Rowling, which is on sale July 31, Harry’s birthday. 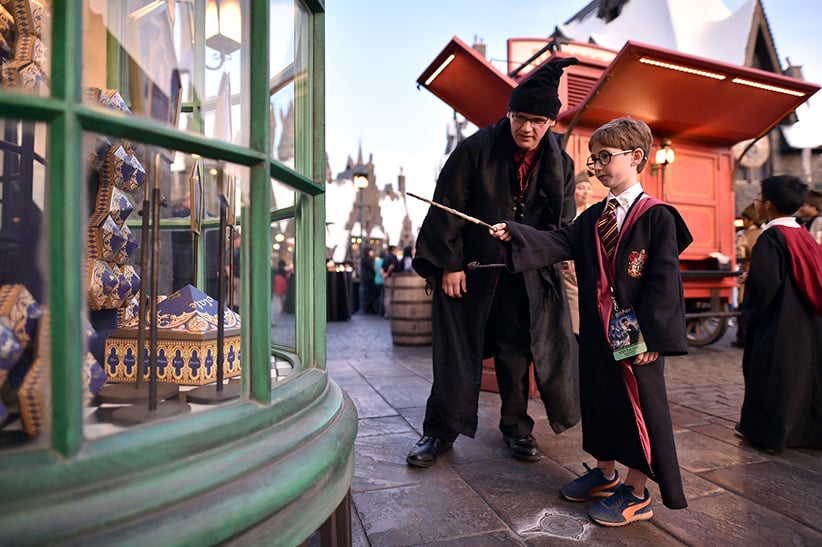 It’s an empire that has made the Edinburgh-based Rowling a billionaire—but also boasts a creative force to rival Walt Disney. Every aspect, from play merchandise to theme parks, bears Rowling’s imprimatur. Fans firmly believe she’s the force behind The Cursed Child’s ticketing strategy, which packed the Palace Theatre with true Harry Potter believers—who paid between $30 and $260 for the five-hour play—and not just with those able to pay upwards of $4,000 on the secondary market. “Harry Potter, first and foremost, is a passionately made product of a woman from Scotland. She absolutely loves the thing. That level of love is impossible for other products to match,” explains Anthony Patterson, a marketing professor at the University of Liverpool who has analyzed Rowling’s creation.

Rowling comes across as a kind yet strict aunt, fiercely loyal to her creation and her millions of fans. Pandemonium broke out on Thursday when she quietly opened the red curtains of a mezzanine box and sat down. Fans screamed, “We love you, J.K. Rowling,” as she leaned forward to enjoy the play.

The affection is explained, in part, by the close relationship she maintains with her followers through social media, where she’s vocal on everything from the lamentable performance of Scotland’s rugby team to all things Harry. In May, a fan wrote that Rowling’s writing helped her deal with self-harm and asked the author for an image of a handwritten “Expecto patronum” (a powerful defensive protection charm) so she could get it tattooed on her wrist. Eleven minutes later, Rowling tweeted a picture of the phrase, with a note of encouragement. This week, she tweeted a picture of Luis Vielma, who worked on a Harry Potter ride at Universal’s theme park and was killed in the Orlando shooting. “He was 22 years old. I can’t stop crying,” she wrote.

The creator rules her world with a firm hand, though. Consider her no-spoiler rule. Palace Theatre attendants watched for recording devices, and everyone was handed #KeepTheSecret buttons. Only a few plot details leaked out. Rowling responded, condemning a website posting spoilers as “Wormtaily,” a nasty reference to a wizard who betrayed Harry’s family to Voldemort. “It’s just one of those things one does not do,” chided the Daily Telegraph.

The play is worthy of the secrecy. It delivers so many plot twists and additions to the lore that the five-hour opus is a roller coaster of laughter, screams of shock and dismay and a tidal wave of tears from fans. While Harry devotees would have applauded anything Rowling produced, what she delivers is a deliciously rich tale worthy of being described as “the eighth story. Nineteen years later.”

Sold out well into 2017, it’s part of a phenomenon that shows no sign of stale dating. The fervour of fans is one reason for the franchise’s strength, Patterson believes. “They do tend to browbeat everyone else they meet into reading the Good Book almost in a religious way.” And unlike other giants such as Star Wars or anything from the Marvel universe, which can feel like toy-hawking machines, Harry Potter’s more overtly commercial ventures are tempered by its strong literary roots. The lo-fi Harry Potter Book Night—in which Potter fans variously created Marauder’s Maps, got sorted into Hogwarts houses and took part in a scavenger hunt at one of 10,000 venues around the world—is as important in the Rowling universe as any theme park, perhaps more. At the party at an Indigo store in Toronto, the focus was on the stories, not a piece of merchandise in sight.

Alongside Rowling’s works is a growing unofficial canon. After a few years of fruitlessly trying to enforce their copyrights, Rowling and Co. bowed to the inevitable, allowing non-commercial use of the valuable stories. Now, Patterson notes, Harry is the king of fan fiction, as counted by Fanfiction.net, with almost 80,000 stories. And Rowling keeps thickening the already complex canon through new creations and her official Pottermore site, where she keeps revealing more “beautiful little details,” Patterson says. “She makes it seem so incredibly plausible.”

That richness is also evident at the four Wizarding World of Harry Potter areas within Universal Studios’s parks, the newest of which opened in Hollywood, Calif., this April. Set apart from the rest of the park, the Hollywood version immerses visitors in Hogsmeade, where they can meander through the village, tucked beside the towering castle of Hogwarts. The roofs are laden with snow, and chimneys are appropriately grimy and crooked. In the Owlery, detailed model birds perch above versions on sale. Paper-wrapped parcels are heaped above the old-fashioned, steel-caged cash register, up to the deliberately stained ceiling, and store staff will stamp a Hogsmeade postal mark on your US$10.95 magnetic notepad. Even the toilets are Potter-ized. Dubbed “public conveniences,” stalls features faux old-fashioned high-tanks; the whiny voice of bathroom ghost Moaning Myrtle drones overhead. “If you’ve read the books or seen the movies, you immediately feel at home,” says Tom Schroder, a vice-president for Universal Orlando.

Judging by the age of the visitors at the theme park, the franchise is attracting a new audience. “We’ve noticed parents coming here with their kids,” Schroder says. “I believe the Harry Potter stories have become one of those generational things that parents will share with their kids, and their kids with their kids.” Two such fans are friends Riley, 13, and Thara, 12, both decked out in Harry wear. (By 11 a.m. Riley had added a new Hufflepuff robe and a wand.) “She knows every detail,” says her mom as they head off to the queue for butterbeer.

Rowling’s wizarding world expands further when Fantastic Beasts opens in November. Set 40 years before Potter’s era, the film, the first of a three-part series, features Newt Scamander, a magizoologist who travels to the United States, where wizards live in secret. Given the previous films made US$8 billion worldwide, its blockbuster status is assured.

Inside the Palace Theatre, anything seemed possible. Sitting beside this writer—No. 17,462 in the Oct. 28 ticket queue—were strangers, two teens from Victoria, B.C., who scored tickets this spring through the production firm’s wish list that sells returned tickets. Matt, 19, and Nathan, 16, share my last name: Treble. It’s a surname used by perhaps 100 people in the world, which means we must be distant cousins. The odds that we would sit next to each other are astronomical. Or perhaps someone spilled a bit of Felix Felicis (liquid luck)? Matt’s explanation: “It must be something about Harry Potter.”