He'll teach you how to train your cat

From 2009: The really important thing, according to this professional, is to ‘get inside a cat’s mind’ 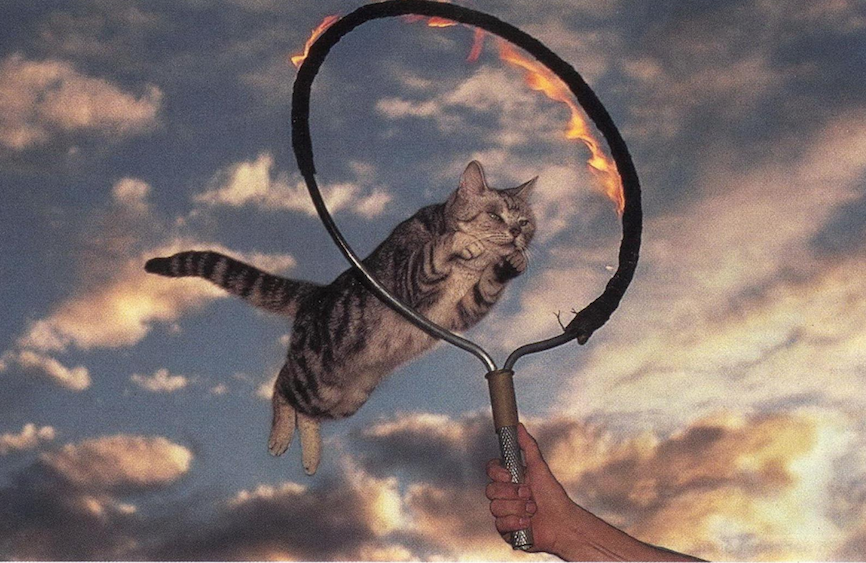 Training a cat to walk a tightrope sounds preposterous to the average cat owner who can’t get their cat to come when called. Yet getting cats to jump through hoops and push dogs in buggies in front of thousands of people has earned Ukrainian-born juggler Gregory Popovich a fortune in North America and fame on Letterman and Leno.

Popovich admits that at first the notion of training house cats seemed nearly impossible “given their famously independent streak that knows no rival in the world of domestic animals.” But now, having trained dozens of stray cats to perform in six circus shows a week in Vegas, Popovich is able to share for the first time his techniques for teaching a cat everything from circus stunts to how to stop pooping outside the litter box.

In his book You CAN Train Your Cat, Popovich writes that it was important to figure out “how to get inside a cat’s mind.” While a dog “will go through all sorts of contortions in order to gain a doggy treat . . . most cats prefer a loving pat or a little kiss on its cheek from its master, accompanied by an exclamation of praise, such as, ‘What a good kitty you are!’ The human voice, when used correctly, can have a hypnotizing effect on a cat.”

If you’re adopting a cat to train for tricks, Popovich advises, search the shelter for a cat that’s less than a year old, with an outgoing personality. After studying a cat to understand its personality, writes Popovich, “I set about playing with it. If it was a jumper prone to tracking and tackling a piece of yarn, that was our trick, and I slowly trained the cat to hop from one stool to another, then through a hoop.” He claims two five-minute rehearsals a day are all a cat can take.

To teach a cat to jump from chair to chair, then through a hoop, begin with a feather on a stick. “Waving it will attract the cat’s attention. You lead with the feather (waving the feather in the spot you want the cat to jump to) as you say, in an even tone, ‘C’mon, c’mon, c’mon.’ At this point, the cat is thinking about jumping. Now you change your tone of voice into one that is firm, and louder (though not so loud that it will startle or frighten the cat). ‘Jump!’ you say. This final command is a prompt the cat will readily respond to, and remember for the next time.”

The “greatest secret” Popovich learned “was to reward my performing cats with grand gestures of affection only after they performed their tricks. When rehearsing at home, if a cat hopped through a hoop, that’s when I’d give it generous adoration.”

Cats love affection, but be careful, he advises. “If you stroke your cat for too lengthy a period, such as for more than a minute, it may grow irritated and angry. It may suddenly, unexpectedly, turn and sink its teeth into your hand. Here is a tip for extricating yourself from having your arm or leg mauled by your otherwise loving pet. Remain absolutely passive. Just freeze, not making a sound. This is a sign of subordination to your cat. Most of them, having subdued the moving limb, will release the grip of their mouth and forepaws.”

Cats love a game of chase, he writes. “If your cat is staring at you, then goes and hides behind a curtain, it wants you to go find it there. Or if the cat tears like a bullet through the entire room and ends up in an opened closet, then peeks out at you, that’s your prompt to pursue it.” But again, be careful, he cautions. “If it then lies on its belly, seemingly inviting you to stroke its stomach, it will likely seize your hand by its front paws, bite your wrist and kick and dig its rear claws into your arm.”

Sometimes an angry adult cat will poop outside its litter box. “Perhaps even in quite a vengeful manner, leaving droppings in the living room or bedroom.” If this happens, never scold the cat by its name. “Bring the cat to the scene of the crime, and say in a strong voice something along the lines of ‘Why did you do that?!’ Then confine the cat with a litter box in a small area, such as a bathroom with a closed door for a half-day or overnight. This incarceration is corrective punishment that should prove effective.”

Finally, “What if your cat proves to be very trainable, and you become a skilled duo performing tricks together, then one day it simply won’t respond to your cues?” There’s only one solution, explains Popovich. “You’ll have to try another day. Even a cat that’s always been eager to play along may, for whatever mysterious reason, not be in the right frame of mind one day and simply look away from you with complete lack of interest.”

FILED UNDER: cat Gregory Popovich The Vault train You CAN Train Your Cat