'Baltimore' seemed to herald a new Purple reign of edgy politics AND great hooks. Was it a flash in the pan? 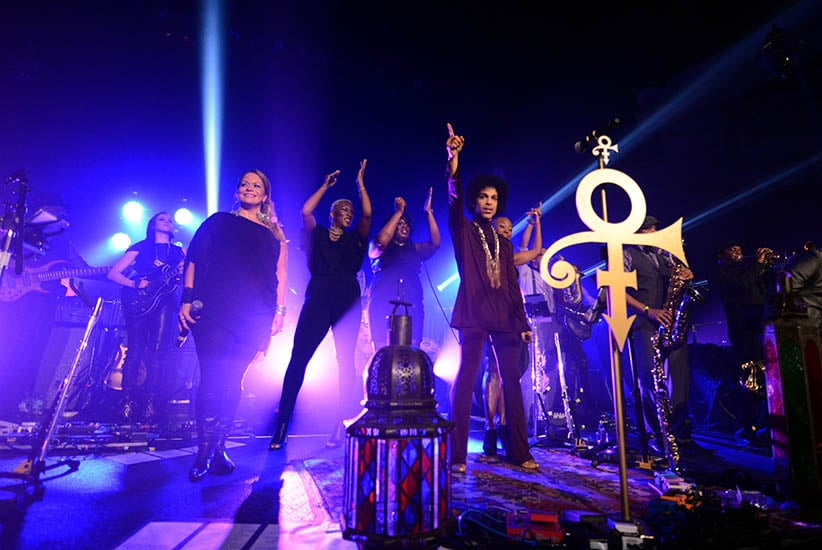 “Toronto, you gotta be careful with me,” said Prince in the midst of his show Tuesday night at the Sony Centre with his all-female power trio, 3rd Eye Girl. “I have been known to break a few curfews.” The last city he had played was Baltimore, at his Rally 4 Peace concert on May 10, where “No curfew” became a refrain between songs.  There, it was clearly a political statement, but back in Toronto, the town he called home a decade ago – when married to locally born Manuela Testolini – his references to “taking the city back!” had more to do with his rock-royalty status, his Purple reign.

Significantly, there was no Baltimore, the song that has made him, once again, the most talked-about artist on this continent. In recent years, Prince hasn’t been so relevant; no longer a sonic innovator, he’d been making only local headlines by playing short-notice “Hit N Run” gigs announced a day or two before, in smallish venues, to rabid fans paying dearly – up to $270, in Toronto. But when he declared that “black lives matter” at the Grammys, all of a sudden the cuddly, middle-aged Prince showed a little of the edge he had in his heyday. Baltimore shows it even more.

The tune that he shared on Soundcloud on May 2 is surprisingly poppy, combining understatement (“Nobody got in anybody’s way / I guess it was a good day”) with chanted sloganeering (“If there ain’t no justice, then there ain’t no peace!”), and a lyric adapted from Albert Einstein (“Peace is more than the absence of war”) with an eloquent guitar solo that summons hope. Prince also references Michael Brown of Ferguson, Mo., and in the line “Let’s take all the guns away,” he sets the NRA – and even the American constitution – in his sights.

Equally importantly, the song has an indelible riff. Prince, for the first time in a long time, has pushed all the right cultural hot buttons. Reactions have ranged wildly, across political lines: the New York Post called it a “trite oversimplification of America’s most complicated issues” rife with “banal, subhippie slogans,” while USA Today claims it “evokes the uniting spirit of [Sly] Stone’s ’60s hits such as Stand and Everyday People, as well as standing with the finest of [Prince’s] own post-Purple Rain material.” Prince courted further controversy when he played the song in Baltimore by bringing city prosecutor Marilyn Mosby onstage.

He chose not to play it in Toronto, a city with its own race-relations and policing issues, amidst widespread calls for the city to abandon its policy of carding. The night wasn’t bereft of political content: Prince prefaced Controversy with “Do you mind if we go back to the ’80s … When we were blind to the injustices of one side” (or something to this effect; the venue’s PA system was so overdriven that large portions of the show sounded like a badly compressed mp3). He offered up a menacing rendition of his 1987 state-of-the-world protest song Sign O the Times, with snarling guitar supplied by Toronto’s Donna Grantis, and in his previous show, at 8 p.m., according to the Toronto Star, he called the ballad The Love We Make a way to “soothe the crazy times we livin’ in.” But was Baltimore just a one-shot deal?

Following up his emotionally charged performance in Baltimore, Prince emphasized dancing, not politics.  All the elfin 720-degree twirls (and magisterial guitar solos too) presented him as a superior human jukebox, focusing entirely – in the second show at least – on older material. Granted, the current pop landscape is all about self-empowerment, and Prince, wearing a shirt with his own face printed front to back, fit right in – but he might have aimed higher. Did he not want to trouble us with American politics? Or did he not trust his own song to transcend its time or place? He might have given it a chance:  if we can still party like it’s 1999, maybe we can also say, “Baltimore, ever more.”