How did we get so vulgar? 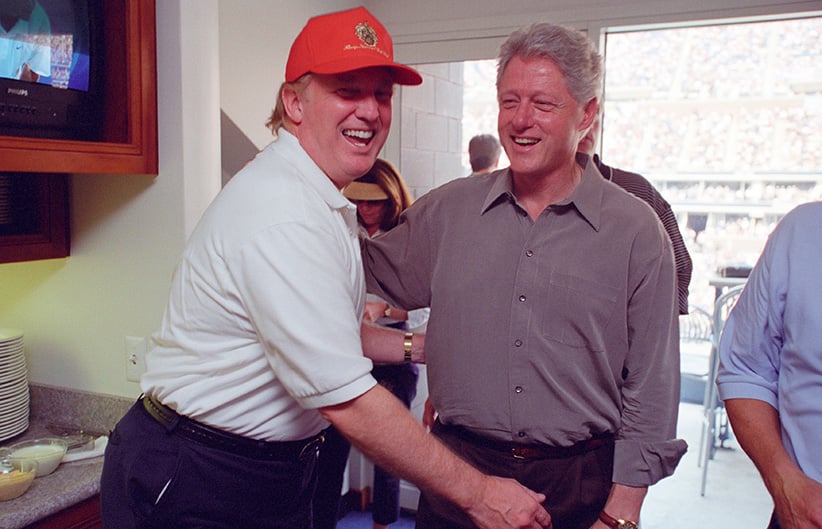 At first blush, it sounds risqué. David Friend’s 600-page opus, The Naughty Nineties: The Triumph of the American Libido does indeed feature porn, Viagra, Sex and the City, The Vagina Monologues, Howard Stern, boob jobs and the Bobbitts. But that’s just the tease. The book is actually a cogent analysis of the cultural and sexual drivers in American politics. While it takes readers on an enjoyable romp through the erotically charged touchstones of the decade, it also explores how those touchstones polarized the Republicans and the Democrats, creating a culture war that still rages today over women’s reproductive freedom, LGBTQ rights, marriage and more.

Friend, an editor at Vanity Fair, provides a breezy summary of third-wave feminism, Madonna’s contributions to pop culture, the impact of the television show Murphy Brown, the rise of Internet pornography, “post-moral” movies (American Beauty), the Heidi Fleiss phenomenon and more. Woven into this context is the author’s running commentary on how Bill Clinton became both the target and trophy of his age.

Like a fun communications professor, Friend asks in the book, “What are the implications of the inundation of erotica explicit stimuli and conduct?” In short, how did we get so vulgar? And how did America end up with Donald Trump? In conversation with Maclean’s, he discussed how the ’90s changed America. He examines the politician who came to symbolize the decade’s moral relativism and lauds the resilience of his friend Monica Lewinsky. This conversation has been edited for clarity and length.

Q: Why is it important to look at the sexual excesses of the 1990s now?

A: Because of the way they’ve influenced today. Unfortunately, we’re repeating the worst parts of the ’90s—like the public shaming, the continued de-evolution of culture, the prurient voyeurism and exhibitionism that came full flower with 24/7 news, scandal TV and the birth of Fox News. At the same time, we’ve had the new obstructionist politics minted by Newt Gingrich. It’s important to think of all that so we don’t get mired in it. Another good reason to recall the 1990s is Donald Trump himself. He’s like a defrosted character from the ’90s who was frozen in time, like Mike Myers’s Austin Powers. Here he is, with his cartoon mojo, ignoring the lessons of the past and repeating the same mistakes. Through that lens, we can look at the ’90s and revisit some of our worst foibles.

Q: Have things gotten worse—more vulgar, less ethical—in what you call the “Trump Teens” of today?

A: Yes! Dave Eggers kindly read the book and emailed me to say, “This [book] will surely solidify the ’90s as American’s most embarrassing decade,” but I find it hard to conceive of being more embarrassed than we are now. We set up this sense of nothing shaming us anymore in the 1990s, and that’s true today. There was a sexual overlay on the whole news cycle, a dumbing down of culture. There was a blurring between our public and private life that still sticks with us. What we got with Bill Clinton was a free pass for politicians to lie—as he did in the famous 60 Minutes interview about having an affair with Gennifer Flowers.

Q: Please talk about the four “ethical spectacles,” to use your term, that defined the era.

Q: Two are bookends. The first was when Lorena Bobbitt sliced off her husband’s dick. It went from a private matter to a public outrage on the 24/7 news cycle. It brought to light domestic violence, marital rape, and many people were using Lorena’s actions as a call to arms against sexual violence. That was the first salvo. People asked, “How could she cut his dick off and what did he do to prompt it?” People picked sides. I interviewed Lorena over dinner in Georgetown. While we’re having dinner, she got texts from her ex-husband, who clearly claims to want her back.

The last salvo of the decade, if we can go forward to late 1997, is the Citizen Kane of sex tapes, by Pamela Anderson and Tommy Lee. They clearly meant this tape for private purposes. Someone stole it from a locked safe in their home and it became a viral sensation. People who’d never gone on the Internet went on the Internet to watch. People who’d never seen porn were watching a private act between famous people. This was a big deal for the promotion of the web and it signalled a breakdown in privacy, whether they were famous or not.

Q: What happened between those bookends?

A: In a six-week period, two key things happened, starting in May 1994. One was Paula Jones deciding to go forward with her case against Bill Clinton for sexual harassment and defamation. It took four or five years to play out. Had she not sued the president for improprieties that occurred when he was governor, we would not have had the revelation of the president’s relationship with Monica Lewinsky, or Clinton’s resulting impeachment. This was really the first domino, but it was a big domino because it became a cause for the Right to rally behind.

Six weeks later, O.J. Simpson got into his Bronco, and the entire nation watched this alleged killer on the freeway. The whole country stayed tune for a year and a half. It was the first real “reality show” that was based on an actor-athlete-L.A. celebrity-cum-possible murderer. These four things together really pushed us over the edge.

Q: Over the edge into what?

A: They changed the narrative. And they changed American decorum. After those four incidents, our impulse became to unapologetically eavesdrop, to leer, to pry into the famous and justify our intrusion offer cover for our own deflected shame.

A: You’re right. With the exception of [the American response to] Somalia and the Balkans, and the first World Trade Centre attack in 1993, this country was on a roll. It was a period of economic expansion in peacetime in our country. These were good times, these were crazy times and there was a devil-may-care attitude in society. The AIDS pandemic was being addressed. There was progress. There was a liberal-centrist in the White House. Not that it was innocent, in any way. There was a lot of darkness, too, but it wasn’t post 9/11 darkness. It wasn’t the economic crisis under George W. Bush. It wasn’t the current age, which is as grim as can be.

A: Right now, there is a “feel-good” attitude toward the ’90s by many. Gen X and Gen Y is having nostalgia for the ’90s—the way boomers had nostalgia for the 1960s when they came of age in the 1980s. You see it with the current revival of Twin Peaks, for example. I thought I was writing a book for boomers, but it actually skews younger.

Q: Why is Bill Clinton, the ultimate boomer, such an icon for the 90s?

A: He had a charisma that was Kennedy-esque. Nixon was practically asexual. Then here comes Clinton, casting his honeysuckle spell. Who was he running against? G.H.W. Bush—a war hero, an ambassador to China and the UN, a respected figure, head of the CIA, but he was called a wimp! There was a cover story in Newsweek, “The Wimp Factor.” But Clinton had this allure, this carnality. He had this high-cholesterol quality and a real messy humanity. He’d feed off crowds, who’d feed off him. Part of his charisma was sexual and part of it was just youth. Bill and Al [Gore] were really this younger generation that projected a sense of vigour and vitality that G.H.W. Bush did not have. The right saw them as leading the attack on family values with progressive initiatives. It sparked a culture war that eventually pushed the Democrats left from the ’90s onward.

Q: How do you draw a line from Bill Clinton and Donald Trump?

A: The moral relativism of the ’90s—embodied in Bill Clinton, the adulterer, the liar—got voters accustomed to Trump. Trump was a reality-TV celebrity. He was a brand. He was also a horn dog, a braggart and a social media-holic—just like voters. He, too, has a messy humanity.

Q: In the future, will every American leader have to have a messy humanity?

A: No, I think we’ve learned. The last thing we want is another Trump. It all changed with Reagan. We had an actor becoming president and nothing has been the same since. You hear rumours that Al Franken is kicking the tires [to run for President], you hear rumours that George Clooney is kicking the tires. My guess is that the right female candidate in either party could come along and blow everybody else out of the water.

Q: Back to sex. You cite a 1996 Maclean’s article about the Tantric trend…

Q: Has that played out successfully for women?

A: In some ways. In the book I quote Margaret Talbot in The New Yorker writing about the television show Girls on HBO. She says, “It’s a show that reminds you that the sexual revolution is a done deal. Few women today see sex as a bargaining chip in a bid for commitment. Gender parity tends to go along with more sex.” Of course, now with Trump rolling back access to reproductive choice [sighs]…

Q: Monica Lewinsky is a key figure in your book. What role did she play in the ’90s?

A: She was “patient zero,” as [American celebrity doctor] Dr. Drew has said, for cyber-bullying.

A: In the aftermath of the revelations by Julian Assange and Edward Snowden, in the shadow of the Patriot Act, in the year of Trump, we really don’t know what the government is doing! Monica Lewinsky was a person who was having a relationship with the president of the U.S. and she was turned upon by the White House, by the special prosecutor, by the media, by the FBI—who cornered her in a hotel room and threatened her with 27 years in prison unless she divulged information about a consensual relationship with a married president. We need to constantly be mindful, especially in the Internet age, of what is private and what is public. When is government overstepping its role and bounds? When is a president too powerful? When are the justice department and the FBI acting on the people’s behalf or acting on congressional behalf? Individuals are caught up, every day, legally and legislatively, in this bureaucratic grinder.

A: She has made a wonderful transition to a new life. She lectures all around the world about bullying. She’s a writer. She inspires audiences. We’ve worked together at Vanity Fair and became friends. I’ve witnessed people coming up to her on the street and asking if they can hug her. They identify with a person who was shamed or who was condemned because of their sexual choices. There’s a compassion you can see in people. There’s a concern for what the system did to her. It shouldn’t happen again. That’s why I think it’s important to hear her tale again, 20 years later.

FILED UNDER: Bill Clinton David Friend Editor's Picks sex and the city The Naughty Nineties: The Triumph of the American Libido