How gaming companies co-opt the language of oppression 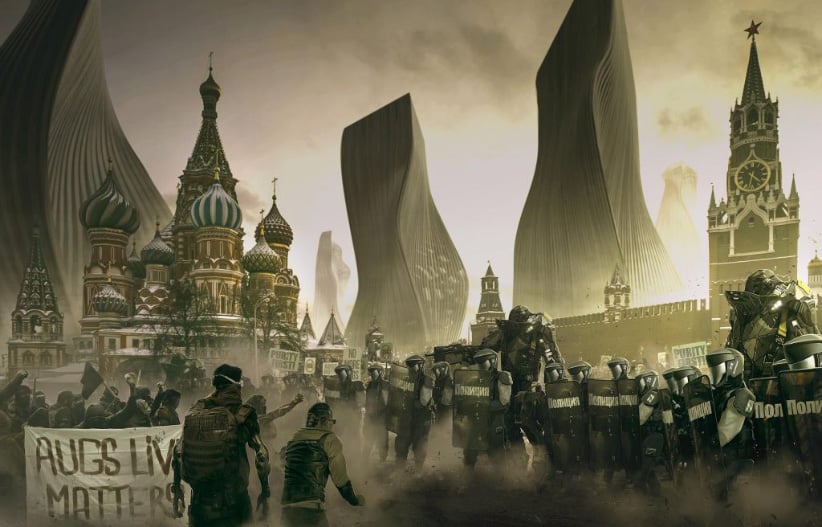 The popular video game studio Eidos Montreal released marketing photos last week for its upcoming title Deus Ex: Mankind Divided. Deus Ex is one of the most popular franchises in gaming; the original, having sold more than a million units, is always present in debates over which PC game ranks the best of all time. The series explores familiar dystopian themes in cyberpunk lore, including the unintended consequences of human innovation, unchecked growth of massive global corporations, and the secret societies twisting the aforementioned to their advantage. It also deals with class fractures among a technically advanced society—in this case, among “augs” (augmented humans who have replaced some of their limbs and organs with cybernetic prosthetics), and “naturals” (non-augmented humans who haven’t). In the marketing photos, protesters at St. Basil’s Cathedral in Moscow hold up an “Augs Lives Matters” sign before a mass of police outfitted in riot gear. In this, and the immediate backlash, Eidos Montreal hewed closely to another sci-fi convention: casual ignorance of real-world race issues.

The problem began at last year’s Electronic Entertainment Expo (commonly known as E3), when Eidos Montreal teased the narrative of the upcoming game as “mechanical apartheid.” The online reaction was mostly negative, with some pointing out that the term “apartheid,” in the context of the Deus Ex world, makes a mockery of the actual brutality and slaughter inflicted on Black people by a white ruling class in pre-1994 South Africa. The forced analogy between that experience, and that of imaginary people rich enough to outfit their bodies with robotic parts, was too much. The game’s executive art director, Jonathan Jacques-Belletête, did the company no favours in responding to the criticism: “It’s a form of art, the people outside don’t think it’s art; it’s just stupid games … we’re fighting against those people. And then when we’re dealing with serious subjects suddenly we’re treated as little kids that are just doing video games again.”

When the “Augs Lives Matters” photos were released last week, reactions went from negative to downright hostile. Manveer Heir, a designer with rival studio BioWare spoke with gaming site Polygon, and was blunt in his assessment: “It is bad optics and marketing departments of all departments should understand optics and how to react to the current state of the actual world.” In an exchange with the game’s executive brand director André Vu (who claimed the slogan was coined for the game before Black Lives Matter was coined for Trayvon Martin), he was less forgiving: “The fact that you went forward with posting the image & not realizing the optics/meaning of that image to people is incompetent.” Heir, an outspoken critic of misogyny, homophobia and racism in gaming, was not alone.

When I spoke with Tanya DePass, founder of the Chicago-based nonprofit organization I Need Diverse Games, she began the conversation with a resigned sigh. After the last Deus Ex game, featuring a Black woman named Letitia who spoke with an exaggerated Stepin Fetchit accent, DePass continues to find herself exhausted by the ongoing grind of game companies erasing, misrepresenting, and stereotyping our experiences. “When you’re giving markers of real-life oppression, but never talk about real-life oppression, it does a disservice to the audience because they think we can’t handle it.” When I told her  about Belletête’s comments, she was audibly rankled. “You don’t get to hold up a game as art if you can’t stand the criticism. Why should I give you my money when you don’t recognize my humanity? When you only see me as a dollar sign?”

Against the common wisdom that Millennial gamers and developers have more enlightened attitudes, racism and racial tropes persist across generations. This, despite the fact that Black and Latino youth are, per capita, spending more of their time and money on video games. For example Capcom, the developer for the popular horror game Resident Evil, came under fire in 2009 when the preview trailer for Resident Evil 5 featured a white, male protagonist shooting and punching his way through hordes of Black African zombies. Naughty Dog, developer of the Uncharted franchise, introduced its first Black woman as a main character in this year’s fourth and final installment of the series. Normally this would be a great thing, but for the fact that the main character—again, a white man—has to engage her in a fistfight mere minutes after their first encounter.

MORE: Why we can’t trust SIU to probe death of Abdirahman Abdi

I also spoke with Brooklyn-based fantasy author Daniel José Older. As someone who has pushed back against similar problems in the fantasy and sci-fi genres of literature, Older didn’t seem surprised to hear that this marketing campaign was Canadian-made: “Art can save lives, but it is a double-edged sword,” he said. “In these genres, racism magically disappears from the narrative. Writers don’t want to talk about race, but they do want to talk about oppression. It’s not the conversation that divides us; it’s the glossing over and flattening true forms of oppression that divide us.”

Older was quick to point out that he hasn’t played the Deus Ex games, but that hardly matters. In the science fiction genre, a Venn diagram between readers and gamers would form a slightly oblong circle. The problems within the genre, primarily concerning the lack of diversity among fictional characters and the creators themselves, also overlap. It is not sufficient for a group of creatives in Montreal to present a work that invokes real-life oppression as “art,” claim neutrality, and leave the rest open to interpretation. Especially when considering Montreal is not yet a year removed from the last time blackface was performed in a public theatre, or from the time two teenagers grabbed a Muslim woman by her hijab and threw her to the ground. It is not sufficient in the age of the Truth and Reconciliation Commission, or the killing of Abdirahman Abdi.

Eidos Montreal’s executive staff would do well to pay attention. They’re not fighting against those who consider their work to be child’s play. What they’re fighting is an audience who takes their work seriously, and are critiquing the art they’re putting forward.

Time for them to grow up.