Patricia Treble overcame obstacles, 17,462 positions in line and hours of waiting to nab her Golden Snitch: Tickets to the new Harry Potter play 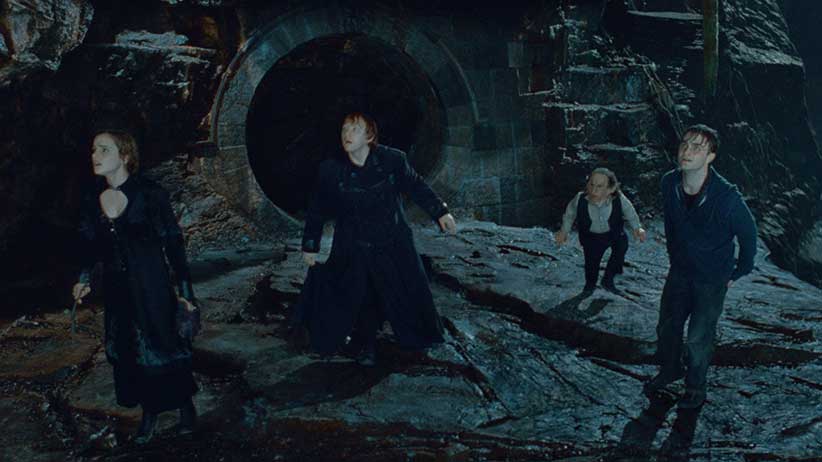 Nothing is easy when it comes to Harry Potter. His life was extraordinarily difficult: he spent his early years living under a staircase, then he had to face the biggest, baddest wizard in history. So it’s no surprise that some of those travails rub off on Muggles (those with non-magical powers) who are fond of Harry and his world. The books got thicker, and darker, as the seven-part series progressed. Beloved characters died, villains survived. It was an odyssey that took time and patience to absorb.

This time, it was the quest not to get the Deathly Hallows but to get tickets to the newest HP venture, a play. It felt like a game of Quidditch, with players bloodied and bruised. But in the end, I and thousands of other fans had something precious in our hands: a Golden Snitch, in the form of a confirmation email. We had tickets.

“The eighth story. Nineteen years later,” is the motto of Harry Potter and the Cursed Child, Parts I and II. Advance tickets went on sale yesterday at exactly 11 a.m. London time. Given the seven books written by J.K. Rowling sold more than 500 million copies, demand was expected to be ferocious. It was. A minute after the box office opened, I was No. 17,462 in queue.

My heart sank. I’d already worked out on paper some depressing calculations. Because this play is seen in two parts, that effectively halves the number of shows. The Palace Theatre seats 1,400. That effectively means only eight “full” performances a week, seen by 5,600 people. Including previews, the ticket dates announced were June 7 to Sept 18 inclusive. That would be just 84,000 seats. Given pent-up demand for anything new in the Harry Potter world since the final book, The Deathly Hallows, came out in 2007, my chances weren’t great. I had to hope that everyone in the queue before me bought fewer than five tickets each, and hope that they didn’t want to see it when I did, which was during the previews.

With a wait estimated at “more than an hour” and the walking figure in the queue barely moving off the first square, I settled in for a long haul. Stop automatic updates of the operating system (if it rebooted, then I’d lose my place in the queue), never let the computer go to sleep, check Twitter for potential pitfalls and problems. The queue was the latest in a series of challenges that the producers of the play forced onto Harry Potter fans. It did feel a bit like I was trying out to be a seeker (Oh, for heavens sake, just google “Harry Potter and [term being referenced]”).

It started out gently. At the very end of July, the play’s Twitter account (which went live in June) announced that fans could register for priority booking when the tickets went on sale in the fall.

Sign up for Priority Booking for Harry Potter and the Cursed Child for the first opportunity to purchase http://t.co/4HSWj0gKpC #CursedChild — Harry Potter Play (@HPPlayLDN) July 31, 2015

At the end of September came word from the author that it would be split into two parts. After that the deadlines got shorter and shorter. On Oct. 9, the play warned that the priority list would be closed on Oct. 24.

Sign up to our priority list by 11.45pm BST on 24 October to get the first opportunity to book #CursedChild https://t.co/pzjlwZQ6wF

On Oct. 23, I got an email confirming that I’d successfully registered for the priority booking. At the same time, it warned that another email was about come with details of how to access it. One hour after the cutoff—at 1 a.m. London time on Oct. 25—another email landed announcing that tickets for the first four months (June 7 to Sept. 18) were going on sale on Oct. 28 at precisely 11 a.m. London time. Only online bookings were available. Everyone now had to create an account with Nimax Theatres, one of the play’s official ticketing partners. You had to use the same email address used to registered for priority booking on the official play website. The email included a link to create that ticketing account. And the deadline was less than three days away: 1 p.m. London time on Oct. 27.

The tickets were going on sale the next day, at 11 a.m. on Wednesday, Oct. 28. To make life even more complicated, those who had registered for priority booking and created a ticketing account, would get yet another email. It would come 15 minutes before the tickets went on sale and contain a link to the special ticketing website. So after a long production night—Maclean’s goes to press on Tuesdays, so I got home after midnight—my alarm started blaring at 6 a.m. (Thank heavens Britain had abandoned Daylight Savings the previous weekend, thus shortening the time difference to four hours, giving me an extra hour of sleep). The email arrived just before 7 a.m. I logged on. That’s when I realized more than 17,000 others stood between me and the Golden Snitch. Slowly, however, my odds started to improve. Helpfully, the queue page kept updating information, including what days were selling faster than others.

Good: After 100 minutes in the Harry Potter play ticket queue, am at half way point Bad: Still 8,800 ahead of me pic.twitter.com/2qALYHUEyz — Patricia Treble (@PatriciaTreble) October 28, 2015

More than two hours into the wait, I was down to mere seconds. 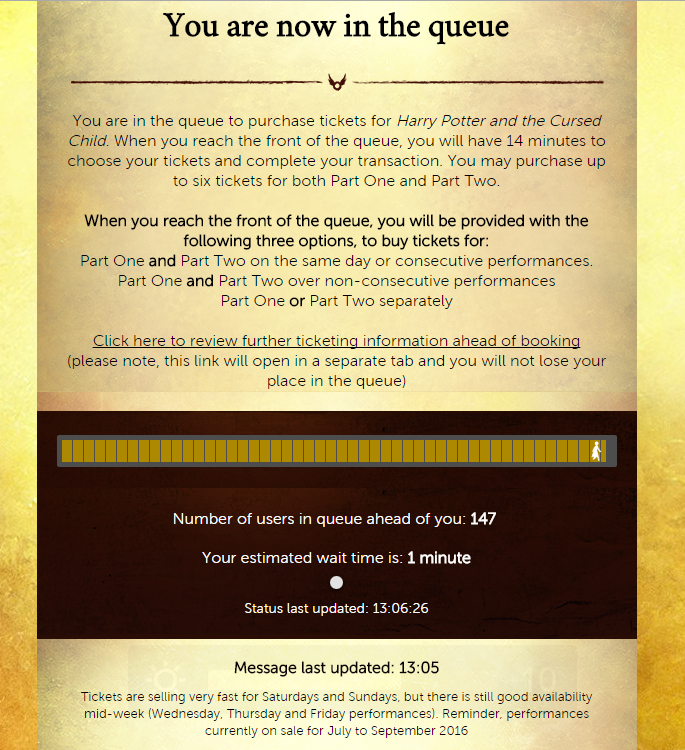 Then I was in. The site gave me 14 minutes to select the dates still open, then the class of seats (and prices) available. That’s when the diabolical cleverness of Rowling’s team sunk in. No one was picking exact seats, but instead was choosing general areas. Customers can only buy a handful of tickets for one specific set (part 1 and 2) of performances.

Except Rowling & Co. seem to have made it difficult to resell those tickets. For one, the tickets have to be picked up at the box office on the day of the performance. In person. And you’ve got to bring the emailed confirmations. Since everyone logged into the ticketing site was asked repeatedly to confirm mailing addresses, I’m presuming that the box office will be asking for identification that includes the address, and/or the credit card used to purchase said tickets. So unless those resold “tickets” for seats that aren’t yet announced also come with fake ID, some fans who chose the resale route could be in for a nasty shock at the theatre.

(2/2) Please do not attempt to resell your tickets on alternative platforms, as patrons will not be admitted into the theatre.

Due to unprecedented demand—more than 175,000 tickets have been sold to date—the play has opened up blocks of tickets up to January 2017 to the priority fans. On Oct. 30, it’s the turn of everyone else to wait patiently in the queue. They can buy up spots up to April 2017. That’s more than enough time to re-read all seven books.