Three Gaga tributes are under way, though a Toronto show is first, and most ambitious

Few pop stars have infiltrated as many cultural spheres as Lady Gaga. Her sound has influenced popsters such as Selena Gomez and revived dance music on the Billboard charts. Her outlandish wardrobe has inspired collections from Jean Paul Gaultier and Donatella Versace (not to mention that legion of Gaga impersonators worldwide). Her first fragrance, Fame, launched last year and sold more than six million bottles during its first week of shelf life. Universities have added courses examining her social significance and sexual persona. It’s that multi-faceted career B.C.-born playwright Alistair Newton wanted to examine, and he’s chosen to do it in the one arena Gaga has yet to invade, though she cites it as a major influence: musical theatre.

The result is Of a Monstrous Child: A Gaga Musical, a show opening May 14 at Buddies in Bad Times Theatre in Toronto that has already had some interest from theatres in New York. Directed and written by Newton, it explores Stefani Germanotta’s manic route from private-school pariah to digital-age pop monarch.

Newton wasn’t the only one with the idea. Two U.S. theatre companies have also been working on Gaga-centric musicals, both riffing on her album titles. The first is the New York-based Glitter: The Fame Monster project, which has reportedly been on hold since 2011. Another enigmatic production is The Fame Monster: A Musical, announced in 2009. Both projects plan to mirror schmaltzy revues such as We Will Rock You and Jersey Boys. Newton has gone in a different direction. “Those [musicals] sound like everything I didn’t want to make,” he says, noting that his work was informed by intellectuals such as Judith Butler, Bell Hooks and the legendary Michel de Montaigne, whose famous 16th-century essay about the nature of strangeness became part of the musical’s title. “I find her to be far too much of a complicated subject for that method of theatre,” he says. “I didn’t want to frame her in something that resembles Mamma Mia!”

Newton says he is trying to do both “a celebration and an interrogation of who Gaga is.” He decided not to use full songs from Gaga’s repertoire for the Monstrous score—and inadvertently avoided the red tape and tangles with Gaga’s licensing and legal teams. Instead, he mashed up lyrics and dialogue from Gaga’s CDs with snippets from a broad base of musical names—including Radiohead and David Bowie—as well as interviews from magazines, newspapers, TV and stage banter from her Monster Ball Tour.

The musical reflects Gaga’s own highly referential work. Some of the VIPs on Newton’s dramatis personae are Grace Jones, Andy Warhol, Madonna and feminist scholar Camille Paglia—who, spoiler alert, makes a cameo to read Gaga’s eulogy. Another character is Leigh Bowery (played by Stratford alum Bruce Dow), the late Australian performance artist-club promoter whose bizarre world informed many of Gaga’s attitudes, and her getups. “He was an underground figure who died right when he was about to cross over,” Newton says. “Gaga is who Leigh always wanted to be but couldn’t.”

While figuring out how to stage Gaga in a non-Broadway way, Newton was surprised to find out just how much of an educator of queer history his subject was. “Her message is, ‘Don’t just buy my records—immerse yourself in all the amazing people who made me think the way I think.’ ” And some of those people are gay men such as Boy George, Quentin Crisp and Alexander McQueen. Another driving force was the idea of Gaga worship, explored via a “super fan” named Tyson James. A Gaga-obsessed drag performer, James “spoke about Gaga in pseudo-religious terms,” Newton says. “He would say things like, ‘She saved me,’ and that got me thinking. Most figures in pop have fans pitch their hopes onto that person as some kind of proxy. The difference with Gaga is she’s actively engaged in that relationship. Gaga evangelizes and says things like, ‘I’m here to save you.’ ” Themes of devotion and fellowship consumed Newton, and his show has as much to say about celebrity and fandom as about its whimsical subject. 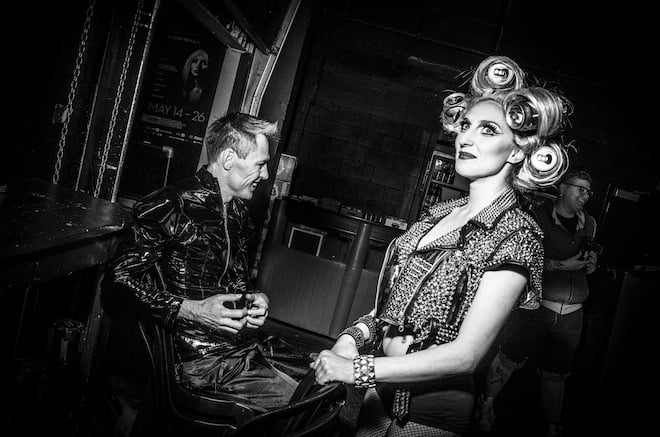 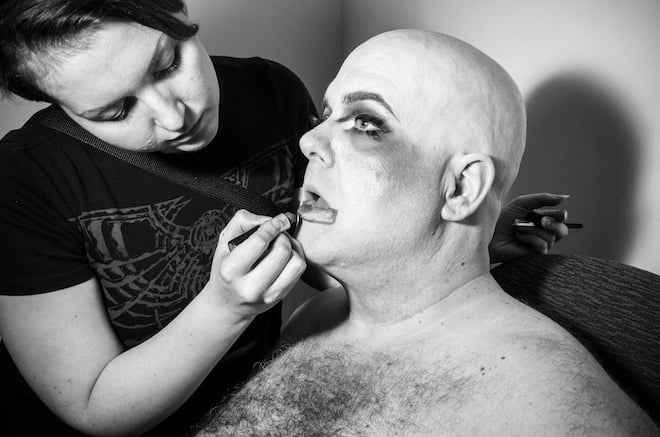 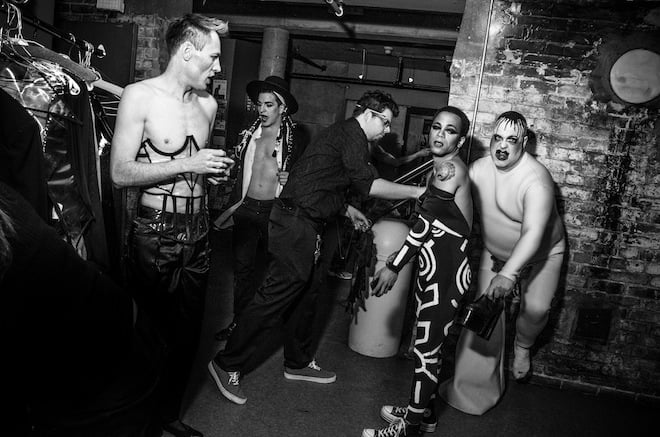