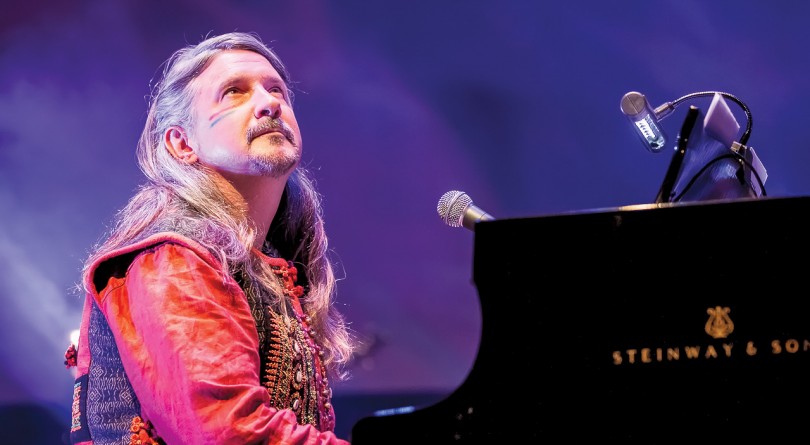 Matthew Lien plays during a 2013 concert. (Unique One Entertainment)

It starts whenever Matthew Lien flies to Taipei. Flight attendants realize who he is and want selfies. Then, at border security, agents tell him they love his music. Meals at restaurants get interrupted by bashful fans. Paparazzi snap his photo on the sly. Riding the subway, Lien feels the stares and hears the whispers. “I don’t know what people think famous people do,” he muses. “They don’t think we ride subways.”

The 53-year-old, who has long grey hair and on this day is wearing Lennonesque glasses, has hosted two Taiwanese TV shows. His face has been plastered on billboards and the sides of buses in advertisements for Maya Café and Taiwan Beer. The Taiwanese government appointed him cultural ambassador, and Esquire China once named him man of the year for his environmental work.

That larger-than-life existence is literally half a world away from the one Lien is now leading in Whitehorse, where he lives in a rented duplex with his youngest son and works out of a home studio that overlooks a snowy, treed backyard. In this room, outfitted with microphones, speakers, keyboards and computer monitors, his concert and tour posters hanging on the walls, Lien is exploring the esoteric frontier of binaural audio.

READ MORE: Inside the wild Canadian past of the Trump family

Binaural, which means “two ears,” involves producing sound that creates an immersive, three-dimensional sonic effect experienced through earbuds and headphones. “There’s definitely the passion, personally, to push the envelope of what thrills me as an artist, as a producer, to achieve something more dramatic and more natural,” he says.

For Lien, who was born in California and has lived in the Yukon on and off since he was a child, the journey to localized superstardom began with his 1995 album Bleeding Wolves. It’s mostly instrumental, with Celtic, classical and European folk influences, and incorporates sounds of nature Lien recorded—wind, a trickling creek, a falling tree. His manager at the time declared his career over when she heard it. Then something bizarre happened: it went multi-platinum in Taiwan.

“It just resonated at a time when there was a sensitivity and a warmth for whatever it was that I was communicating through the music,” Lien says. “Taiwan was going through a bit of a renaissance with respect to its Aboriginal cultures, a real kind of reckoning and a realization that Indigenous culture there really had been suppressed and oppressed and abused. At the same time, there was also a movement of environmental awareness and environmental protection, because Taiwan had finally gone through martial law—dictatorship—into democracy.”

RELATED: The Inuvialuit’s secret paradise at the Yukon’s Shingle Point

Bleeding Wolves has environmental activism running through it—the title signifies Lien’s vehement opposition to a Yukon government program that had wolves shot and killed from helicopters in the 1980s and ’90s in an attempt to increase moose and caribou populations. On his website, he describes the record as “a metaphor for some of the more cataclysmic dealings of humankind upon the natural world.”

Its success set the stage for another life for Lien in Taiwan. He began incorporating traditional Chinese instruments into his music and, when an earthquake killed more than 2,000 people in 1999, he performed a fundraising concert that raised hundreds of thousands of dollars. Lien learned Mandarin, married a Taiwanese woman and had a son. (He has three older children in the Yukon—“each with a different mother,” he offers.) For 12 years, he lived on the island mostly full time.

What brought him back to the Yukon was his father, who’d been diagnosed with cancer and was getting sicker. The two were close; growing up, Lien spent summers at a lodge his dad ran at Dezadeash Lake, a couple of hours’ drive from Whitehorse along the then-pothole-ridden highway. In the fall, he’d return to San Diego to live with his mother. When his father died in 2016, Lien inherited three cabins his dad had built at the lake. With the help of a Taiwanese investor, he intends to open a wilderness retreat for his Asian fans.

The Yukon was calling him back in other ways. He missed the quietude, “the power that radiates from the land,” as he puts it, and saw little enthusiasm for innovation in the Asian music market—something he felt was a roadblock to his next ambitious project. By living mostly in Canada, with trips to Taiwan for performances and events, he hopes to receive federal grants to produce an album entirely in binaural audio.

READ MORE: So a man walks into a Yukon bar (and swallows a toe)

Lien has recorded a demo that illustrates binaural’s effect: sit in his studio with headphones on and your eyes closed and you can hear him moving around the room, talking all the while. He strums a guitar, he walks out of the room and down the hallway, he sticks his face over your shoulder and talks into your right ear: “Don’t open your eyes!” It’s so realistic that when the recording ends and you turn around, you’re surprised to see him sitting quietly on the couch, no guitar in sight.

Lien produces binaural recordings with an $11,000 microphone that resembles a human head, complete with ears and a nose. He’s carted it to churches all over Europe, where he’s recorded sound reverberating in the cavernous spaces. He plans to add the reverberations to the music he plays in studio, so it’ll sound, for instance, as though he’s playing piano in St. Martin’s Church in Canterbury, England.

This, he hopes, will transport listeners out of their environment, whether that’s a cramped subway ride to work or a bustling city sidewalk. “I don’t know what is more artistic than the sound of something in space—the space wherein the music is occurring,” he says. “Talk about art, man!” Lien’s interest in binaural is bolstered by Audio Engineering Society research that shows 85 per cent of music consumers nowadays listen with earbuds or headphones.

With 20 albums and 30 years of music production under his belt, the title of his binaural album, Full Circle, makes sense in more ways than one. In Whitehorse, there are no requests for selfies or autographs. Yet this is where Lien was known first—playing at a bar several nights a week and organizing concerts. “In the Yukon, being recognized is way different because it’s such a small community,” he says. “You really feel like these are old friends.”