The classic Nintendo 64 video game turns 20 in August, marking two decades of serving as an odd kind of cultural touchstone 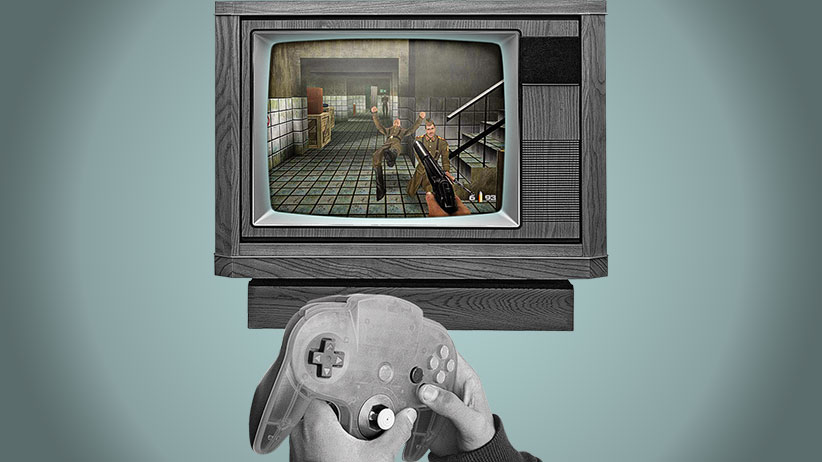 The Nintendo 64 video game GoldenEye 007 was released on Aug. 25, 1997—and 20 years later, it’s dodged the odds and became iconic for so many of a certain age. In Maclean’s 2012 special issue on James Bond, Aaron Hutchins looked at what made the game so great.

James Bond fans aren’t always readers or watchers; some of them are players. For a select generation, the obsession started as they were crammed on a couch with three buddies in their parents’ basement, with a three-pronged joystick controller, a Nintendo 64 and way too much free time. This was the world of GoldenEye 007.

There is one long-standing rule for video games based on movies: they’re often terrible, a cash grab used to lure unsuspecting parents into opening their wallets with a recognizable brand. When GoldenEye 007 game director Martin Hollis stood in front of audiences at the E3 gaming expo in 1997, his product already seemed dated. “GoldenEye, the movie came out an embarrassing two years (before). The next Bond film (had) already finished shooting,” he told a European Developer’s Forum in 2004. “It would be fair to say that critical expectations were very low.”

In terms of bad movie-to-game adaptations, GoldenEye 007 proved to be the exception, in large part thanks to multiplayer game play. Four friends could shoot each other seemingly forever on a TV screen split into four. To boot, every game variation was an introduction to old movies, allies and villains. Multiplayer modes also played off previous films: You Only Live Twice (players have two lives), Licence to Kill (a single bullet kills your opponent), or The Man with the Golden Gun (whoever carried the Golden Gun could kill others with a single shot). And while there were many playable characters from old Bond movies, unofficial rules in many households meant you could never play as Oddjob: his diminutive stature made him much harder to shoot, and anyone who used him was a cheater.

The game quickly grew into a cultural phenomenon, selling more than eight million copies worldwide. In North America and Europe, it is the second-bestselling Nintendo 64 game ever, according to industry research firm VGChartz—better than Zelda and even Mario Kart. University students had all-night GoldenEye marathons in dorm rooms. Teenagers would bring their Nintendos to high school and organize tournaments. It was the ultimate social gathering with serious bragging rights at stake.

In the late ’90s, Graham Dingsdale called up his local Vancouver radio station, CFOX, and issued a challenge over the air. “I said, ‘I think I’m the best GoldenEye player in the world and I’m putting on this tournament to prove it,’ ” remembers the chef, now 41. When 30 others showed up at the local video game store to prove him wrong, Dingsdale defended his self-proclaimed title and showed that he was indeed the best—at least in Vancouver. Soon after, he formed the National GoldenEye Players Association. Sadly, it never took off.

GoldenEye 007 made everyone look at video games differently, especially the little details. Unsuspecting bad guys would occasionally spend time swatting at flies or take bathroom breaks. In the midst of gunfire, guards would sometimes run away to activate an alarm instead of fire back. All this may seem basic by today’s standards, but it was quite innovative in 1997.

While the game was based on the movie, they offered different experiences. The original game featured a Pierce Brosnan-like Bond, but some of the enemies were from past films. “A lot of people I talked to said, ‘Oh, didn’t Pierce Brosnan fight Jaws?’” Verano recalls. “Well no, it was Roger Moore—but your experience of the Bond universe was shaped by GoldenEye and the way you played it.”