How the Grinch stole a pandemic Christmas

He was sure every Who in the town was resistant / To keeping their gatherings socially distant. / “And they’re cooking their turkeys!” he yelped with anxiety. / “The year 2020 has crippled society!” 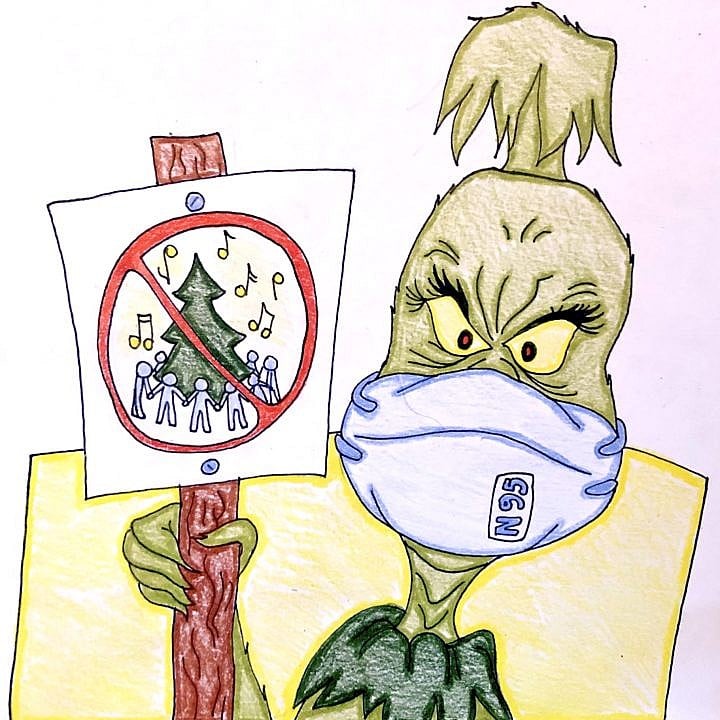 We’ve rewritten a few favourites so they better align with this year’s pandemic holiday season, including ‘A 2020 holiday song, inspired by Adam Sandler,’ and ‘A pandemic Christmas Carol.’

Every Who down in Whoville liked Christmas a bunch.
But the Grinch, who lived just north of there, had a hunch.
See, Christmas would harm them—the whole Christmas season!
Now, you might ask why. Public health was the reason.
It’s true that the Grinch had some holiday blues.
It’s true that he spent too much time watching news.

But I think that the riskiest factor of all
Must have been that his heart was two sizes too small
(A genetic condition most Grinches endure).
You see, Christmas Eve there still wasn’t a cure
For the illness that preyed on Whos young and Whos old,
And the dread the Grinch felt made him shudder with cold.

He was sure every Who in the town was resistant
To keeping their gatherings socially distant.
“And they’re cooking their turkeys!” he yelped with anxiety.
“The year 2020 has crippled society!”
And as he sat twiddling his fingers of green,
He thought: “They must wait ‘til they have a vaccine.”

For tomorrow, he knew, all the Who girls and boys
Would huddle together comparing their toys.
“They’ll breathe on their grandmothers’ faces! Oh, no!
They’ll breathe on the face of each Who that they know!”
And then—worst of all—with Christmas bells ringing
They’d stand hand-in-hand and they’d get to the singing!

That night, while the Whos lay asnooze in their town,
The Grinch donned his N-95 and marched down.
And he came to the square where they’d sing ‘round the tree,
And tore off the decor in a dizzying spree!
Then he put up some signage: “No Christmas This Year!”
(It had big, bolded letters he found quite severe.)

He took down the bells, and the wreaths from front doors.
He unplugged the lights in front yards, on all fours.
He let out the air from a blow-up Saint Nick.
Then, startlingly, heard at the gate a soft “click.”
A young Who was watching. She wore a small mask.
The Grinch, caught red-handed, now froze in his task.

The child kept her distance, two metres away.
“Sir, what’s wrong with Santa?” she started to say.
“He’s… flat,” said the Grinch, as the Who cocked her head.
“I’ll fix it,” the Grinch said. “Now, go back to bed.”
Strange how the Who followed health regulations…
But the Grinch told himself: You can’t trust her relations.

So he finished collecting the ornamentation,
Undid their displays, all without reservation.
And when he was done, he made his way home.
He sang “Happy Birthday,” hands soapy with foam.
But on Christmas Day, when he got out of bed,
The Grinch couldn’t get that young Who from his head.

Yet just when he almost—yes, almost—felt bad,
For cancelling Christmas and making her sad,
The Grinch heard a sound that struck him with fear.
A sound that he really did not want to hear!
He heard the Whos singing! And singing! So loud!
How many germs would be spread in that crowd?

Had the Whos lost all reason? Had they not seen the sign?
Were they gobbling up misinformation online?
He looked down at Whoville and widened his eyes.
Then he gasped! What he saw was a shocking surprise!
The town square was empty. The tree was still bare.
But voices rang out in the cold winter air.

The Grinch stood there puzzling, his feet in the snow.
Then he realized! The windows were open, below!
They’d opened their windows! They waved from inside!
At the sound of their music, the Grinch almost cried.
He returned to the square and he tried to atone.
And hung up the baubles and tinsel alone.

And Christmas still came. But the Grinch had no plans.
He shuffled back home. Then he washed up his hands.
Now the Whos, full of love, safe and sound in their rooms,
Invited the Grinch to their holiday Zooms.
When he opened his inbox, the Grinch gave a start.
For the Whos found a way to warm up his small heart.