Think no one’s noticed you routinely send back the wine? Or that you filched the pepper grinder? Think again. 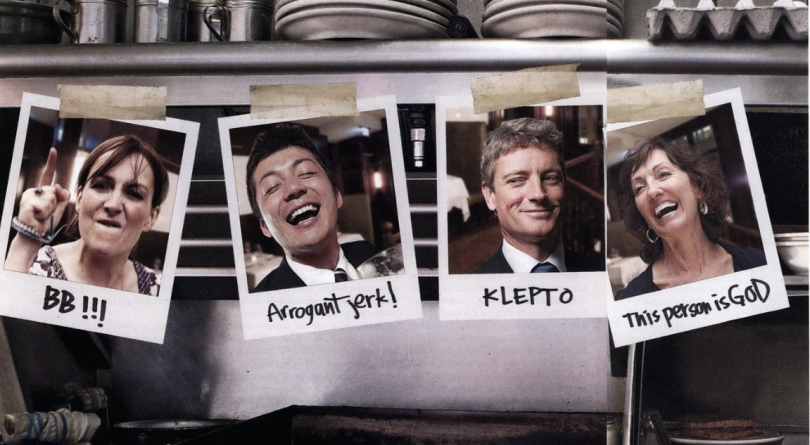 The owner of a popular Toronto gastropub who asks to remain nameless is showing off what he calls his “nightly journal,” though “naughty journal” is a more accurate descriptor. Most of the handwritten entries deal with the dull details of restaurant life—nightly sales, tables turned, supplier snafus. Where reading turns interesting, even salacious, is in its dutiful recording of customer misbehaviour collected via staff and fellow customer complaints. Names are used when they’re known. Otherwise, physical descriptions suffice.
A notation was made the night a notoriously difficult-to-please regular, a well-known writer, pulled a diva act, and told her waiter: “When you make me unhappy, you make thousands of my readers unhappy.” Another entry refers to a couple found in flagrante delicto in the beer fridge; they were married, though not to one another. Then there are the customers who’ve been banned—the restaurant’s “no-fly” list. They include a patron who was a little too free with his hands with female wait staff and a big-name businessman the owner says is known for stiffing restaurants: “His MO is to hand over his credit card; then when it’s declined he promises to come back the next day. He says, ‘I’m worth 30 mill, I have two luxury cars.’ He’s burned me in other establishments. He showed up a week ago and we said,‘Mr. Doe, we asked you not to come back.’ ”

Keeping such careful track of customers may seem creepy—like moralizing black marks made by a 19th-century schoolmarm or potential ammunition for an aspiring extortionist. After all, who wants to go out for a romantic dinner and have to worry that the waiter is doing double duty as a Stasi agent? Yet the note-keeping proprietor, who has been in the industry for decades, defends the practice as an essential part of doing business, like keeping glasses spotless. Staff are expected to read the latest entry every night before service as a precaution, he says: “You wouldn’t want to go to a bad restaurant and we don’t want a bad patron.” Some of the most successful restaurants he’s worked at, he says, kept a similar book.

They’re not alone. Restaurateurs may not all use a handwritten journal to monitor errant customers, but keep track they do. Most refuse to admit it on the record; when they’re assured anonymity, they’ll dish about keeping track via intra-staff communication, emails, and reservation-taking software like Open Table that draws up a customer’s record—the number of times he or she has come in and how much they’ve spent. “Open Table is a computerized version of a maître d’s head,” says Steve Dublancia, the New Jersey-based author of Thanks for the Tip: Confessions of a Cynical Waiter. Notes about customers are often written in code, he explains: “BB for ‘big bitch’ or ‘This person is God,’ which means: ‘Give them anything they want.’ ” The owner of one upscale Toronto restaurant admits he uses the software to keep out problematic customers: “I came in this morning to 30 phone calls and we’ll prioritize in terms of people we want to be here and those we can live without.”

At the top of the list of customers restaurateurs can live without are the habitually drunken, the loud, and the abusive. As well, there’s the “kleptos” who can’t resist filching the pepper grinder and diners who abuse the staff. Also unwelcome are couples who routinely see a night out as an opportunity to re-enact their version of Who’s Afraid of Virginia Woolf?

The most common irritators are the constant complainers angling to get a freebie. The marketing director of a major high-end restaurant enterprise says a frequent gambit is to call up the next day with mysterious “food-borne illness complaints” that didn’t afflict any other diners, she says. Her theory: the “illness” has “more to do with sticker shock than any real gastronomic distress.” Their names are duly recorded, she adds. Another insider refers to customers who inflame the kitchen by asking for so many substitutions on a menu item that they end up with a totally new entree. Then they insist the doctored item be removed from the bill because they didn’t like the way it tasted.

“Some people make a game of it to see how much they can get away with,” says one well-known Toronto restaurateur. He recalls evicting a party of six after one man at the table returned two bottles of pricey wine, then sent his lamb back, complaining it hadn’t been cooked to order. “I thought, ‘It’s me against this guy; I’ll out-service him!’ So I sent the table complimentary glasses of Armagnac, but he sent that back, saying ‘It lacks finesse.’ I finally went out on the floor and told him: ‘If anything here lacks finesse it’s you. Out.’ I ended up eating a $450 bill.”

The cost of customers from hell is far greater than a direct financial hit, he says: they can disrupt a restaurant’s ecology to the point that it rattles staff and puts a pall over the entire evening. Recently, he had to call a patron whose boisterous table had caused numerous complaints to tell him he wouldn’t be welcome again. The customer was “aggrieved,” which has been the typical response the few times he has had to do it. The restaurateur evokes the spirit of John Stuart Mill explaining his rationale: “We have to make the satisfaction of the greatest number of people the priority.”

Michel Deslauriers, a 35-year veteran of the Montreal restaurant scene, says blacklists and customer surveillance are far more common than people know. Good restaurateurs, like good parents, have a low misbehaviour threshold: “You’ll adjust the bill once for a table that complains about the food,” he says. “But if you see there’s a pattern, you don’t want it to take over. So you say, ‘You’ve been here two times and all we’ve done is dissatisfy you so I’m sorry, you’ll have to leave—there’s no charge and you are not welcome here again.’ ”

In cases when a customer’s irritation quotient isn’t high enough to justify blacklisting (but still warrants “Oh God, here come the Baxters”), restaurants often employ passive-aggressive techniques to discourage return visits. One manager recalls having to routinely serve a close friend of the owner, who was an arrogant jerk. “I regularly made sure he had a poor table and so-so service. And I overcooked his steak,” he says.

High-maintenance diners are destined to receive poorer service, says Dublancia, whose Waiter Rant blog dishes on the industry. “When you’re a waiter you want to maximize your effort-to-earnings ratio,” he explains. That means known poor tippers also lose out. Dublancia, who’s no longer a waiter, remembers one regular customer who was a wonderful person but a lousy tipper. “We might not have given him the utmost of our effort and he probably wondered why he didn’t get the best seat in the house,” he says. He confesses he adopted a bad attitude to make sure known bad tippers and diners with bad attitude would request another section: “I’d slip into arrogant waiter mode: when they’d mispronounce the entree I’d snort. Or I’d call women ‘Madame.’ They just love that. Or I’d give the impression I’d rather be somewhere else and they’d get the vibe quickly.”

Restaurant karma exists. “People can run you ragged,” says Dublancia. “So if you see someone who you know is going to treat you well, it’s human nature to treat them better.” It isn’t unheard of for a difficult patron to be subversively “scolded” by a waiter, like one customer at a difficult-to-please table who didn’t have the cellphone she left behind returned as quickly as it might have been. “Rude behaviour in a restaurant won’t get you anywhere,” Deslauriers concludes. “A lot of people think that the customer is always right, but that’s far from the truth because at the end of the day the person handling the stick is not the customer. It’s the server, the maître d’ and the owner. They’re the ones who make your experience pleasurable or not.” The man who keeps the nightly naughty journal agrees: “People who are generous, both in monetary and human terms, generally reap one hundredfold what they sow,” he says. “Conversely, those who are miserly beget misery to themselves and others in all aspects of their sorry existence.” And he’s got the lurid stories to prove it.