How Tomson Highway blazed a trail for Indigenous artists

The Cree playwright, novelist and musician on opening the Luminato festival, cultural appropriation, and why he still considers himself a social worker 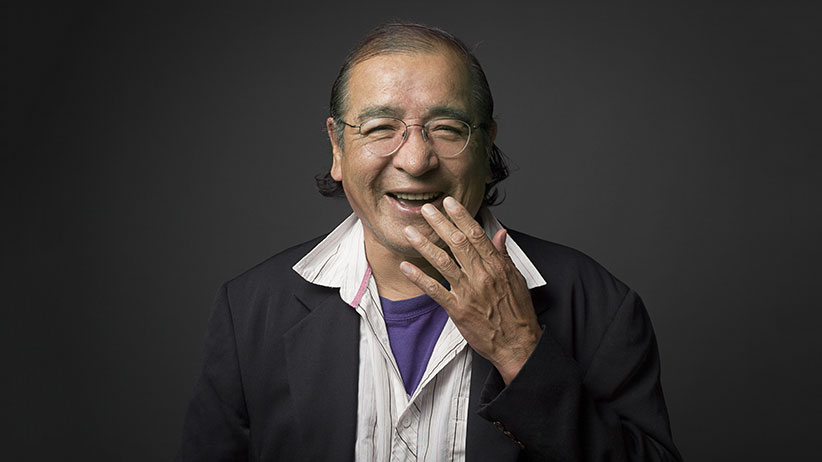 Tomson Highway is wearing a blond wig and playing Ravel’s Piano Concerto for the Left Hand when reached at his home in Gatineau, Que. “I have a different obsession every week, and this week it’s that concerto,” says Highway. “Ravel wrote it for a friend who lost his hand in the war. Look it up on YouTube,” he insists. “It’s incredible!”

Aside from obsessing over Ravel this week, Highway, a renowned musician, playwright and novelist, is rehearsing his opening act for Luminato. He’s one of 60 other Indigenous performers who will kick off Toronto’s 10-day arts festival with a five-hour program called Tributaries. It’s by far the biggest display of Indigenous art and culture the festival—seen by some as having a faint air of elitism—has featured in its 10-year history. “That’s significant,” says Denise Bolduc, the creative producer for Tributaries. “I think it reflects a shift that’s happening now where people are starting to understand and are trying to learn more about Indigenous culture and issues that impact our communities.”

The program centres on themes of femininity, land and water—pillars of Indigenous culture that the public typically sees in negative terms, says Bolduc. Indeed, reports on missing and murdered Indigenous women, fractious land disputes, and water contamination on reserves abound, and rightfully so. But there needs to be space, says Bolduc, to celebrate cultural power and significance of these cultural keystones, too: “Part of it is shifting the narrative. This festival has allowed us to have a voice and a place to do that, and to connect with a diverse community.”

Highway, who will be performing A Cree Cabaret—a selection of of songs from his various musicals—has a long history of bringing Indigenous culture to the masses under a positive light. He’s done it through his own work and by forging a whole industry around Indigenous arts and culture. In anticipation of his performance on Wednesday, with vocalist Patricia Cano and Marcus Ali on saxophone, we spoke with Highway about blazing the trail for the Indigenous artists, and why everyone should be a social worker at some point in their life.

Q: What does it mean for you to be opening for Luminato, and with so many fellow Indigenous artists?

A: It’s remarkable. I find it quite heart-warming to see all these non-Native communities coming together so beautifully to support us and give us a platform to voice our ideas.

Q: You’ve been in the business for over 30 years now. Was there always this kind of mainstream support for Indigenous theatre, music and art?

A: No, and part of it is the industry just didn’t exist. It was a desert out there culturally when I started. There were some Native writers, but most of them were American. In Canada, there was nothing. No playwrights, no novelists, no actors, no directors, no nothing. There was a small group of us that dared to break the mould. That included myself, Graham Greene, Margo Kane and some others our age who revolutionized the field. We opened the doors and all hell broke loose. Now 35 years later, we have a huge artist community, we have given birth to an entire industry, an entire movement, a national voice that is now heard around the world. Our books are studied in universities and schools in Russia, Japan, Australia, South Africa, all across Europe, the United States. That did not exist before.

Q: What was it like for you as a young Cree man from the North to study classical music in southern Ontario?

A: I was the first person from my village to get a university degree, and the first person to finish high school, for that matter. There were next to no Native people in university. At the time, the question of race never came into my mind. I loved going to university, I loved learning, I loved people. And people admired me because I could play Chopin!

Q: How did you go from being somewhat isolated from your heritage while at university to creating works that are deeply rooted in Indigenous identity and experience?

A: Well, I never wanted be a playwright. I went into social work originally because I wanted to give back, using the extraordinary education I had, to us; to my people. I did that for seven years. I worked with children from broken families. I worked with inmates in prisons. I worked with the government on cultural grant programs for social organizations. I criss-crossed the province of Ontario and, on occasion, Canada, so I really got a chance to see the country and its people. It was hard and really uncomfortable at times, but it helped my [theatre] career a tremendous amount. I believe that every artist, singer, dancer, writer, cinematographer should take two or three years out of their life just to do social work. To learn what real life is like. To me that’s a fundamental part of education. It deepens your feeling, and deepens the emotion that your work has. I started writing plays while I was still doing social work, but it took me a while to sharpen my skills to the point where I felt like a professional. The Rez Sisters was that moment for me. People think that’s my first play, but I had done five other plays before that.

Q: Do you think it’s now easier for Indigenous artists to “make it” than it was for you starting out?

A: I hope so. That’s one of the reasons we did what we did; to make it easier for the next generation. I see many, many more artists out there. We have movie stars and rock stars now, and that didn’t exist back then. I can’t say if it’s easier for them necessarily, but there’s no question more people are willing to try. That was my whole objective when I started. I still consider myself a social worker in the sense that I am in the business of creating a climate of success for Native people—to make communities healthier emotionally and spiritually, and more vibrant. I hope that’s helped make it easier for Native artists.

Q: What impact do you think the expanding, more visible Indigenous arts community has had on non-Indigenous people?

A: I think they’re learning things about us that they didn’t know existed. Back then lots of people didn’t realize that we have many of our own languages, our own mythologies. Even if you look at things like the concept of genderlessness, which is entering mainstream conversations, that comes from Native artists who have disseminated that information. In Christian cultures for example, God is a male, and too bad for anyone who isn’t. In our languages, God doesn’t have a gender, which gives room for the idea of divinity in the female form. That’s just one example of our art and spirituality having influence on other cultures.

Q: We’re now seeing discussions about cultural appropriation enter the mainstream, too. We had the incident around the “appropriation prize” recently; last year Joseph Boyden was decried for not being truly Indigenous while building a successful career telling the stories of Indigenous people. I’m wondering, as Indigenous art and culture begins reaching broader demographics, who should get to create it and participate in it?

A: I honestly don’t have time to think about things like that. I don’t have room for them in my life. I can’t begin to imagine to tell somebody else how they can or cannot do their work—that’s not my business. I wish them well, whatever they want to do. Negativity does not work with me. My entire focus is positive energy—to create joy, to make people laugh and have a good time. All I ask is that you do your stuff well, whoever you are. Strive towards refining your technique and the depth of your vision.