A recent concert had a ground-breaking rule for the audience: no talking 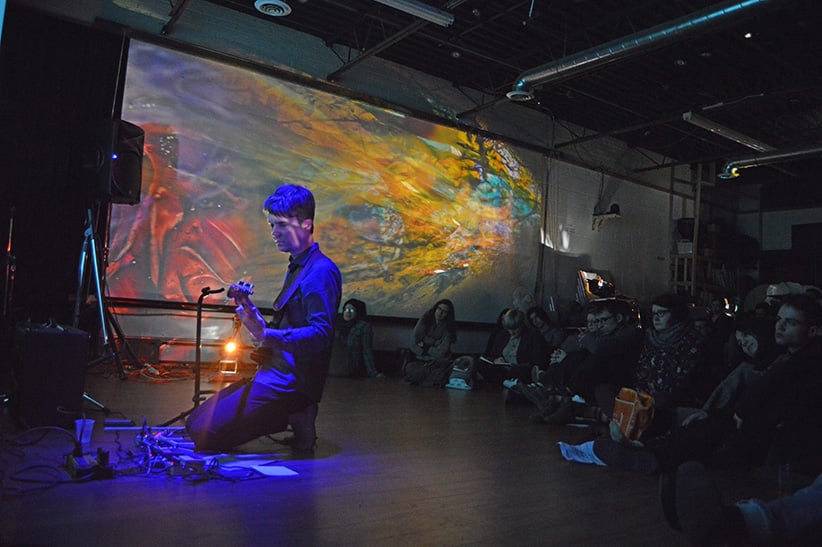 The Don’t Speak concert in Toronto. (Photograph by Elena Gritzan)

A few weeks ago, David Jones made a pilgrimage to London, Ont., to perform alongside the Nihilist Spasm Band, a so-called “noise band” that has been around since the mid-1960s. Jones, an experimental musician from Toronto, had long drawn inspiration from the group, known for improvising on homemade instruments. But his session with them was marred by an unexpected nuisance. “We were being drowned out by people talking at the back,” the 34-year-old recalls. “I couldn’t be believe it—I mean, Nihilist Spasm is a loud act.”

He’s not the first artist to be distracted by noise from the pit. In the 1950s, the avant-garde composer John Cage drew attention to the issue by writing a “piece” in which audience sounds, like whispers and shufﬂing chairs, comprised the music. Keith Jarrett, the American jazz pianist, is known to stop playing and scold people for coughing, much less talking, while Michael Gira, frontman for the ultra-loud experimental band the Swans, used to quarrel with fans he thought were paying insufficient attention. “The audience’s job,” he said, “is to be still and listen—sort of like bipedal cows.”

Jones has a thicker skin, but he leapt recently at a chance to make spectators think harder about their side of the performer-audience relationship. At a show last week dubbed “Don’t Speak,” organizers demanded that customers maintain complete silence upon crossing the threshold of the performance space, a converted warehouse on Toronto’s west side. There, amid artificial mist and trippy projections on floor-to-ceiling screens, Jones and two other acts, North Atlantic Drift and Benoît Pioulard, played sets of ambient music—a genre defined by subtle shifts in sound that are easy to miss if you’re not paying attention. Attendees were free to text, or to write notes to each other on cue cards provided to them at the door.

The concept came in the dead of night to Adam Bradley, a concert programmer for Wavelength, a not-for-profit organization that promotes original music and, its website says, “diversely curated live experiences.” Today’s audiences approach all but the most formal performances as social occasions, Bradley noted, their worst tendencies brought out by smartphones. “I thought it would be interesting to have an alternate reality, where everybody just paid attention,” he said.

A half-hour before the doors opened, Bradley decided to clear the floor of chairs. The idea was to get people to wander about the venue, he said, exchanging notes and mingling in ways they might not if seated. A bar at the back—equipped with large-print signs allowing patrons to point to their drink of choice—promised to enhance the mingling. But when the lights dimmed, most of the 60 or so on hand seemed eager to take a load off, parking cross-legged on the floor in small groups. One man rested his head on his rolled-up jacket. Two women tried to communicate with hand signals, but quickly gave up and began scribbling on their note cards.

Jones’s music began with an ominous, post-industrial feel, building into a fugue of droning sounds, interspersed with an eerie ping, like a submarine’s sonar. He worked from behind a table swarming with soundboards and wires, along with a jury-rigged projection device that cast fast-morphing chevrons and gyroscopic lines onto one of the giant screens. The audience focused on the visuals—but not exclusively. When asked in writing how the silence affected his experience of the music, a man with spectacles and a ponytail scrawled, “I ‘hear’ more of the music, I’m more introspective.”

Afterward, Bradley declared the experiment a success, saying his greatest challenge was keeping the staff from talking. Jones said he experienced a sense of isolation, observing that “everybody seemed to retreat into their own minds.” Yet some found ways to get attention. At one point, Jones was nearly hit by a paper airplane bearing the message, “My other pen pal has left. How’re you doing?” “Good, how’re you?” he wrote on the plane, and tossed it back into the air. The breach of etiquette amused him, though he later admitted: “I’m not really sure it was intended for me.”