Hyeonseo Lee: Escape, exile and why she misses North Korea 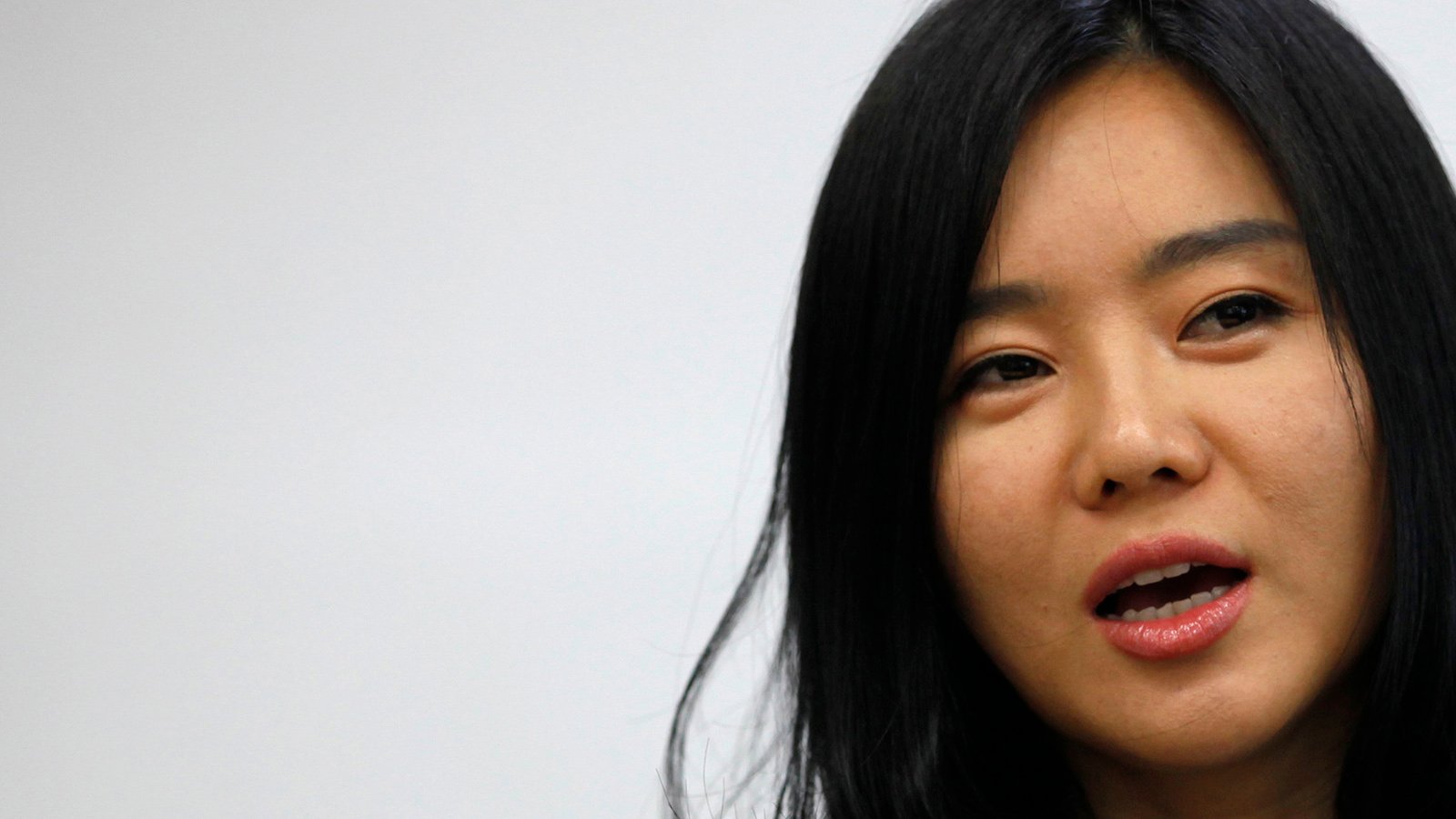 Lee Hyeon-seo in Seoul in May, 2013. Lee is an outspoken and high-profile North Korean defector. (Kim Hong-Ji/Reuters)

Hyeonseo Lee left North Korea when she was 17. She never intended to become a defector; she simply crossed the river that runs between China and the border town of Hyesan, where she spent much of her childhood. She never went back. Now 35, she has published a memoir, The Girl With Seven Names, that provides a rare account of day-to-day life inside the Hermit Kingdom as well as life on the run outside. The book is surprising: Lee recounts public executions, betrayals and famines with a grim clarity, but she also describes a happy childhood. Only when she crossed the Yalu River into China, a country where the lights stay on even at night, did she begin to see North Korea as a place of darkness. Even now, she remains in some ways devoted to her homeland.

She eventually helped her mother and brother to escape. She now lives in South Korea, where she is helping other defectors and applying to graduate schools in the U.S., where she plans to move next year. (Her brother, who once worked as a parliamentary intern in Ottawa and was recently accepted to Columbia University, will join her there.) In telling her story to shed light on conditions back home, Lee has become a high-profile activist. A TED talk she gave in 2013 has over 4.2 million views. She recently spoke to Maclean’s.

Q. In your TED talk, you say you can’t explain exactly how you escaped from North Korea. But in the book you’re very clear. What changed?

Q. Some parts are just amazing. I can’t believe you survived.

A. Can you imagine—we are the same generation. It’s not a story from a hundred years ago. Even today, it’s happening on the other side of the world in North Korea and China. For me, it’s hard to believe I experienced two different periods at the same time. I’m living in the peaceful world, the free world. But I’m still in the world that nobody can understand, as a North Korean defector. I’m still trying to protect my family members in North Korea. They are having a hard time. I can’t say many things, but last year my family members were imprisoned in North Korea. I had to do my best to get them out.

Q. In the book you call North Korea a “place of ghosts and wild dogs.” But you miss it, and you wish you could root for North Korea when you’re watching the Beijing Olympics. What do you want people to understand about your homeland?

A. Many people—when they think about North Korea and the dictatorship, or the military or nuclear weapons, nuclear missiles, those things—tend to forget ordinary citizens are living there. They are suffering under the [dictatorship]. They are forgotten people, actually. To me, they are all honest people, kind people, who don’t know about the outside world. They don’t know they’re suffering and that they live inside a virtual prison without knowing anything about the truth. I hate the regime but I miss the country. It’s my homeland.

Q. In the book there are these big events, like public executions—you saw your first one at age 7—and the public mourning of Kim Il Sung. And there’s all these small ones, like the portraits of Dear Leader and Great Leader, the day-to-day repression. Is one worse than the other or are they the same?

A. It’s all the same. As a North Korean living in that country, we accepted everything as part of our normal life. To outside people, little things like wiping the portraits with the white material, those things look insane. To us, it’s normal. We considered the Dear Leader our god. That’s huge. He’s more than our parents. I thought all of the world respected Kim Il Sung. That’s why we were bowing to their pictures.

And when I received a gift from my parents, I didn’t thank them. I thought the gifts are from the Dear Leaders, so I thanked their pictures. We were stupid. The whole country, we became human robots in the Kim regime. We didn’t feel it was strange.

Q. You never though you would become a defector?

A. I didn’t know the meaning of “defector” until arriving in China, because living in the border town, we had a long-time business with China. So to me, it was not very strange. My brother, as you can see in my book, he even played with the Chinese kids, the boys, during the winter on the river. It was one of the happy moments for them. So seeing that, I didn’t feel crossing the border into China was that strange. It was something that was a part of our lives. My brother visited China many times. It was illegal, but as kids, there’s no pressure under the law as long as you are not 18. My brother did that and it influenced me somehow.

I didn’t tell my mom I was leaving the country. Every decision I made myself, with curiosity. That’s why I could leave the country.

Q. In the book you say you were always more curious than afraid.

A. My mom told me many times how I need to be careful living inside the regime. We didn’t say “the regime.” We didn’t even say “North Korea.” She said the first thing we need to be careful of is the words we deliver to other people. By saying the wrong things, the entire family—not only you but the entire family—will be disappeared in the middle of the night to the political prison camp. Every North Korean knows about that. What’s their crime? There’s no clear crime. That’s why the regime took them secretly while other people are sleeping in the middle of the night.

My parents didn’t talk in front of us about any important things, like politics, about the world, nothing. By saying [anything critical], it could cause huge problems.

Q. You also say North Koreans don’t have any concept of rights. They leave because they need to, or because they’re hungry or in trouble. Not to pursue liberty. Do you see that changing anytime soon?

A. It’s changing right now. For example, in the past, people were loyal to the government, especially during the Kim Il Sung period. They strongly believed Kim Il Sung gave a good nation to the world, gave them happiness. So they tended to respect Kim Il Sung a lot. And then during the Kim Jong Il period, people suffered a lot, especially through the big famine in North Korea in 1995. Throughout that time, people tended to rely on the black markets to survive or to feed themselves. That brought a lot of significant changes in North Korea. At the same time, outside media influences [arrived in] North Korea, like South Korean dramas and movies and North American movies, pop music, K-Pop music. It changed people a lot. That’s why these days, loyalty is getting less and they are more focused on money. In the past they didn’t really need money. They didn’t focus on money. [Those who were] focusing on money they considered very low-status people. But its changing right now, hugely.

It’s very shocking to me that in the past, even between a wife and husband, they couldn’t trust each other. But right now people, by sharing the secrets together, it’s building their trust and relationships. They can’t protest hugely or openly but they’re doing by degrees. So that’s why I have a big, positive hope for North Korea.

Q. Do you think it will change in Kim Jong Un’s lifetime? Or do we have to wait for him to die?

A. After he took power over in North Korea, I had optimism, since he’s my generation and studied overseas in Switzerland. I was fascinated by him. But now I don’t have any hope for him. He didn’t bring any changes, only superficial changes like fashion. He made certain situations more difficult than his father’s period. You can see he’s executing many officials, he’s killing many people to control the regime.

Some high-ranking officials are defecting the country and seeking asylum in South Korea. This is happening right now. This seems like it’s weakening the regime but it doesn’t mean we can have the regime collapse very soon. [Still,] I think Kim Jong Un can’t be ruling the country very long, we expect. We can have reunification, if another power replaces Kim Jong Un. I don’t know who it could be, but I hope and I believe another power, another person will be better.

Q. So you live with your mom in South Korea and your brother is coming to America?

A. Yes. I’m also next year moving to the United States. My brother really wanted to move to Canada after he experienced one year and he was fascinated by living here. But he got accepted to an American school so he will be living there. Next year I will apply to American schools for my master’s degree because I’m still in danger in South Korea. There are some spies. Who, I don’t know. Maybe it’s my friend, who I believed was my best friend. I don’t know whether the friend is a real spy or not. I hope he’s not but I have to be careful. So I think America is the only country that can protect my identity in case I have problems with the regime. And I have an American husband.

Q. You had nightmares your mom was arrested and sent to a labour camp and your brother had become a beggar, and another one about watching your family through the window while they were starving and desperate, then being chased by police dogs. Do you still have those nightmares?

A. Thankfully the nightmares finished four years ago, when I finally reunited my family again. It’s another surprise to me, the nightmares bothered me more than than a decade—for 13 years. Until that moment I had the same dream, exactly the same dream. When I met my family in person, one day I realized the dream disappeared.

People have asked me what was the happiest moment in your life? People say, “Aren’t you happy you wrote your memoir, to have something significant in your life compared to other defectors?” No. This is not the life I wanted. I wanted to live as ordinary people, like you guys. I don’t want to have a very different, unique situation. I want to meet people freely. I want to meet my aunts, uncles, cousins, friends. I want an ordinary life, I want to to celebrate my birthday together. That’s what I want.