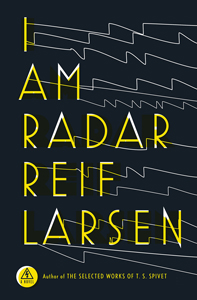 At the outset of this second novel by the greatly hyped author of The Selected Works of  T.S. Spivet, the titular Radar Radmanovic is born as a pitch-black baby to white parents in New Jersey. Is he a fluke of hyperpigmentation, the result of interracial adultery, or a magic-realist reflection of a blackout at the hospital?

“The only thing I am certain of is uncertainty itself, and of this I cannot be certain,” we’re told in an epigraph, itself attributed to a fictional author whose status in the book’s world is unclear: He may either be a real person or a nom de plume. One’s appreciation for I Am Radar will depend largely on one’s tolerance for literary game-playing and references to quantum mechanics—although, happily, this massive novel tugs heartstrings, too.

Radar grows up as the son of a radio operator; both father and son are drawn to a loopy troupe of Norwegian scientist-artists who perform politically charged works, with puppets, in dangerous places. His story is interspersed with those of other precocious boys, their lives entangled like particles, in times and places ranging from Cambodia under Pol Pot to the Yugoslav Wars to the Congo in 2010. Everywhere, scenes of calm and domesticity erupt into genocide, and art provides provocation or relief. Radar’s story further intertwines with literary works (from the medieval Persian poem “The Conference of the Birds” to Conrad’s Heart of Darkness) and, like that of his predecessor, the 12-year-old cartographer T.S. Spivet, is illustrated by diagrams and pictures offering supposed evidence that everything in the novel really happened.

Larsen’s obsessions with patterns—patterns everywhere!—make the novel predictable at times, and narrow in focus, even as it’s wide in scope. So many characters disappear—perhaps they’re living or dead, or somehow both, like Schrödinger’s cat—that we start expecting them to do so. Like Radar’s name, the book is palindromic: Events at the end echo those at the start. Women appear chiefly as satellites, either worried relatives or partners, and the issue of race, while present throughout, is oddly underdeveloped.

And yet, there’s much to admire, even to love, in I Am Radar, between its often lyrical prose, its likeably damaged characters, and a sky-high ambition. When Larsen’s grand designs come together with his investment in the human spirit, the novel crackles with the electric joy of possibility.