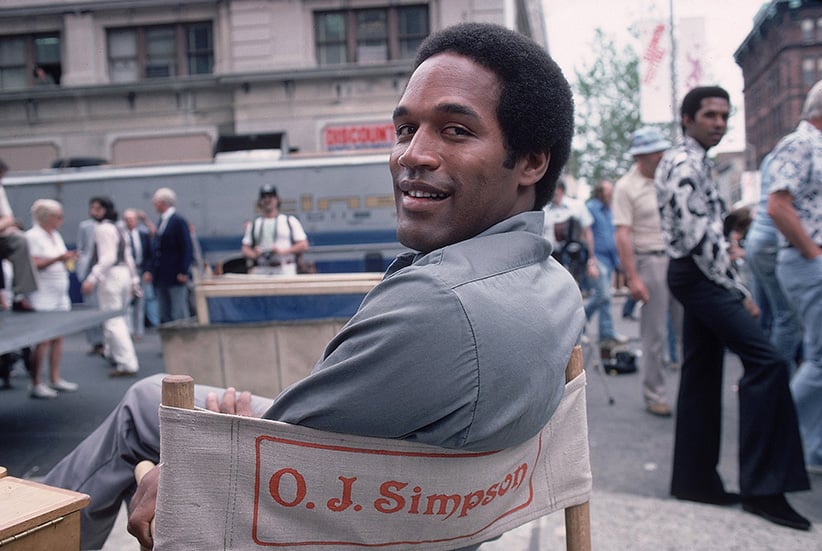 In February 1995, Vanity Fair’s Dominick Dunne summed up the incontestable allure of O.J. Simpson’s murder trial. “The Simpson case,” he wrote, “is like a great trash novel come to life, a mammoth fireworks display of interracial marriage, love, lust, lies, hate, fame, wealth, beauty, obsession, spousal abuse, stalking, brokenhearted children, the bloodiest of bloody knife-slashing homicides, and all the justice that money can buy.” Our fascination with it has not only persisted, but grown in time.

The scintillating trashiness Dunne wrote about was played up compellingly this year by the FX network’s cartoonish courtroom drama The People v. O.J. Simpson: American Crime Story, which unfolded like the TV equivalent of airport fiction. By contrast, ESPN’s new 7.5-hour documentary film event, O.J.: Made In America, premiering at Toronto’s Hot Docs festival this week, is The Grapes of Wrath, Beloved, The Great Gatsby, and In Cold Blood all at once. It’s the Great American Novel take on O.J., positioning his story not as mere lurid exploitation but as a distinctly American epic that articulates so much about the nation’s central, and perhaps its only, theme: race.

“Think of the original sin of slavery, and how this country was built,” says Made In America director Ezra Edelman. “While the film speaks to a number of things, race is the primary theme in the story, for sure. I would like to think there’s an inherent argument about what it means to be black that one can use O.J. to discuss.”

In her 2001 book Playing the Race Card, scholar Linda Williams, a professor at the University of California at Berkeley, examined the Simpson trial as a contemporary iteration of American racial melodrama. From the moment Simpson was formally charged with murdering his ex-wife, Nicole Brown Simpson, and her friend Ron Goldman, the case immediately fit itself to archetypes of the barbarous black man attacking the white woman, she argues. Edelman’s film complicates this racial drama, adding shades of grey to the literal black/white dynamic.

Made In America’s earliest section focuses on Simpson’s complex relationship with racial politics. He came of age as a pro athlete in the era when Cassius Clay became Muhammad Ali, and African-American runners Tommy Smith and John Carlos threw up a clenched-fist black power salute at the 1968 Summer Olympics. As a star running back on scholarship at the University of Southern California in the late ’60s, and as winner of the eminent Heisman Trophy, Simpson had no apparent interest in such militancy. He was constantly trying to erase, or transcend, his race. Instead of deeming him some kind of race traitor, Made In America attempts to understand Simpson’s relationship to his own blackness. “I think that the choices O.J. made are easy to denigrate,” says Edelman. “I also think of the pressure that must have been on him in that era, when the most prominent athletes were speaking out, and were very strident in their rhetoric. There was an expectation that you had to be down with the cause.”

One of Edelman’s interviewees describes Simpson as a “counter-revolutionary.” It’s this lack of political visibility, combined with his stardom, charm and conventional good looks, that accounted for Simpson’s acceptance in mainstream white America: as a football player, a spokesman for Hertz rental cars (whose CEO, looking back in the film today, candidly calls him “colourless”) and, eventually, an actor. His self-ennobling motto, repeated throughout Made In America and uttered by Cuba Gooding Jr.’s pint-sized Simpson in the recent FX miniseries, was, “I’m not black. I’m O.J.!”

“You see him swayed by the American dream,” says Edelman. “And then you think about what American exceptionalism means. I think there was a very real sense of O.J.’s exceptionalism that existed in his head. He thought he was special.” This sense of uniqueness seems to have driven Simpson throughout his career. In the affluent L.A. neighbourhood where he and Nicole made their home, he was nicknamed the “Mayor of Brentwood.” As Nicole’s close friend, the actress Robin Greer, puts it in Made In America, “Los Angeles isn’t like other places. If you’re a celebrity, you have no colour.”

His blackness quickly proved its usefulness in Simpson’s murder trial. Time magazine drew heat for darkening Simpson’s mugshot in order to make him appear, in the words of the NAACP’s Benjamin Chavis, like “some kind of animal.” His all-star defence team positioned their client as yet another black male being beat down by the institutionally racist police whose officers had been recently acquitted for the brutal battering of black L.A. cab driver Rodney King, resulting in citywide race riots. In Edelman’s film, one former Simpson juror talks openly about how she—like several of the jurors—saw the controversial not-guilty verdict as “revenge” for the Rodney King verdict.

By the end of the trial, Simpson, who’d made a point of distancing himself from racial politics as a young man, became an unlikely civil rights hero. When he was acquitted on Oct. 3, 1995, a black male juror stood up, his clenched first thrust in the air in solidarity—a lot like those black athletes back in the ’68 Olympics. “It’s like, ‘what?!’ ” says Edelman. “That to me is the ultimate irony. How do you get from Tommy Smith and John Carlos to O.J. Simpson’s acquittal 27 years later? That’s the journey I want to discuss.”

That Simpson was a record-breaking athlete fortifies Made In America’s narrative and thematic heft. Sports, after all, is perhaps the purest representation of the fabled American meritocracy, in which anyone can use his God-given gifts to achieve success, despite upbringing, class or, perhaps especially, race.

Sports network ESPN has made a name for itself in recent years investigating the rich stories behind American athletics. Popular documentary programming like 30 for 30 and Nine for IX made the grandeur and mythos of sports more palatable to audiences who may not care so much about stats, figures, or even the sports themselves. “I think it took a long time for people to understand what we were trying to do,” explains ESPN’s vice-president and executive producer of original content, Libby Geist. “It wasn’t what people expected of ESPN. We were going a little deeper.”

Made In America is perhaps the ultimate deep-dive. Geist notes the film feeds a renewed interest in true crime binge-watching, thanks to shows like The Jinx and Making A Murderer. But the Simpson trial, which had the public gorging for more than a year on TV and magazine coverage, as well as tell-all books authored by pretty much anyone tangentially involved with the case, was there first.

Edelman’s not shy about his contempt for the renewed appetite for true crime horror stories. He calls the trend “gross,” while simultaneously capitalizing on it. But, for him, and for ESPN, the so-called Trial of the Century is almost a Trojan horse for examining the grander issues. “Everybody kind of thinks they know O.J.,” says Geist, “but this is a different story. Ezra uses O.J.’s story to take you through so many eras in American history.”

There is also, sadly, plenty of resonance with contemporary America. As Williams writes, the Simpson trial created a kind of “double vision” for viewing the American justice system. O.J. was acquitted of murder, yet the public felt he was guilty (a feeling further justified by the guilty verdict in the subsequent civil trial). Made In America offers a wonky, inverted, funhouse mirror reflection of recent cases of radicalized violence in America against people like Trayvon Martin, Freddie Gray, Michael Brown, and others too countless to name here.

For Edelman, the injustice was further compounded in 2008 when Simpson was sentenced on burglary and weapons charges, after stealing a few boxes of sports memorabilia from a Las Vegas hotel room—a verdict widely read as symbolic revenge for Simpson’s double-homicide exoneration, and one that came down 13 years to the day after he was acquitted of (double) murder. Instead of restoring faith in the cops and the courts, the Simpson verdicts further eroded it.

Ezra Edelman calls his film a “tragedy.” It may be hard to view it as such, given the general consensus that O.J. probably did brutally murder two people in cold blood and get away with it. His story is tragic in the sweeping, almost Shakespearean sense. It’s tragic like Macbeth—another story of a vaunted hero whose sense of exceptionalism drives him to violence, and finally reduces him to simpering cowardice. Because after all his attempts to erase, transcend and rise above his blackness, O.J. Simpson was finally reduced to that most quintessentially racist American cliché: just another incarcerated black man.