In Ottawa, at the Berlin opera, live

With this Digital Concert Hall, viewers have advantages over those attending in person 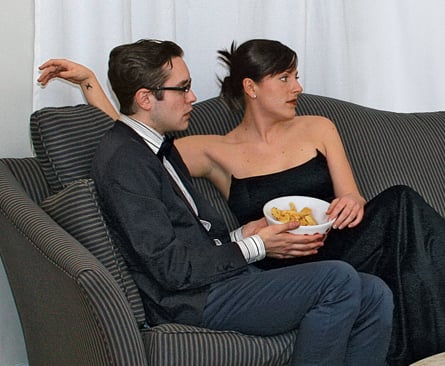 It was a quiet Friday afternoon the other day at the Maclean’s Ottawa bureau, so I closed my office door, turned up the volume on my computer speakers and tuned in, live, to a concert by the Berlin Philharmonic. Sir Simon Rattle was conducting and Schumann was on the program.

Of course this vicarious concert-going experience was made possible via the Internet. But two things make the Berlin Philharmonic’s Digital Concert Hall unique, if only for the moment; one presumes imitators won’t be long coming. First, it offers every minute of every concert program this season. Second, it offers not just recorded performances, but live audio-video streams from concerts while they’re happening.

So I heard the Philharmonic’s French horn soloists roar through Schumann’s Konzertstuck for Four Horns at pretty much the same moment the well-heeled audience in Berlin was hearing it. The Digital Concert Hall’s surprisingly rich sound and visuals ensured I could catch Rattle’s subtlest gestures (though he is not a conductor for subtle gestures). Later in the same program, when pianist Mitsuko Uchida played Schumann’s Piano Concerto, I could see the dust on the piano: extra pressure on the concert hall’s custodial staff. It doesn’t get more vicarious than that.

The design of the hall was revolutionary when architect Hans Scharoun opened it in 1963. The audience is deployed around and above the stage as well as in front of it, an arrangement that also permits cameras to be installed in all sorts of nooks to capture the action from every angle. So remote viewers of the Berlin Philharmonic concerts (about 2,500 watched the first online concert in September, the orchestra reports, and the number has risen as high as 10,000 since) have a few advantages over those who attend in person. We’re not glued to a single seat, so we get to see the orchestra, soloists and conductors from the best angles. We don’t have to dress up for the night out.

And we pay less. Virtual “tickets” to individual concerts from the Digital Concert Hall are sold online for 9.90 euros, about $15. A season ticket gave me access to every concert, both live and archived for future viewing, for 89 euros. The orchestra even makes individual pieces available for less than the cost of full concerts, so if you’re curious about Stravinsky’s Violin Concerto, you can see how Viktoria Mullova played it on March 7, under the baton of Venezuelan wunderkind conductor Gustavo Dudamel, for about six bucks.

There are two things going on here. One is obvious: technology is democratizing art. Radio, the long-playing vinyl record, the CD and amazon.com all brought mass audiences a little closer to the experience of being in a concert hall. Adding high-quality streaming video continues that process and accelerates it.

The other change is subtler and, in some ways, more intriguing: technology is narrowing the pipeline for music distribution, and it’s narrowing it at both ends. Not only does online concert-going free me up, but it liberates the music’s creators too. It’s not Sony or the BBC or the government of Germany that’s put the Berlin Philharmonic online, it’s the Berlin Philharmonic itself: on its own terms, at rates the orchestra sets, with its own rules. Other organizations are following suit, only a little further behind. Orchestras in Toronto, Chicago and Boston have stopped chasing after the old major record labels and started recording their own CDs for sale or download from their websites. Jazz musicians from Sonny Rollins to Branford Marsalis are now running their own record labels.

As data transmission speeds increase and once-exotic technology becomes cheap and reliable, recording becomes commonplace, instead of a special event that carries massive financial risk. That changes the criteria for deciding what to record. The question the Boston Symphony now asks itself, artistic director James Levine told a news conference in February, is, “When did we have a really exciting night in the hall?” Exciting concerts aren’t always perfect; inevitably somebody will cough or a violin bow will slip. “The old aesthetic used to be, ‘Fix it,’ ” Levine said. “And along with fixing it, you fix about 20 to 30 per cent of the excitement right out of the performance.”

The new aesthetic is, simply, more democratic. Any concert is good enough to show, any customer good enough to listen. The concert hall becomes less of a fortress. It’s a very good thing.