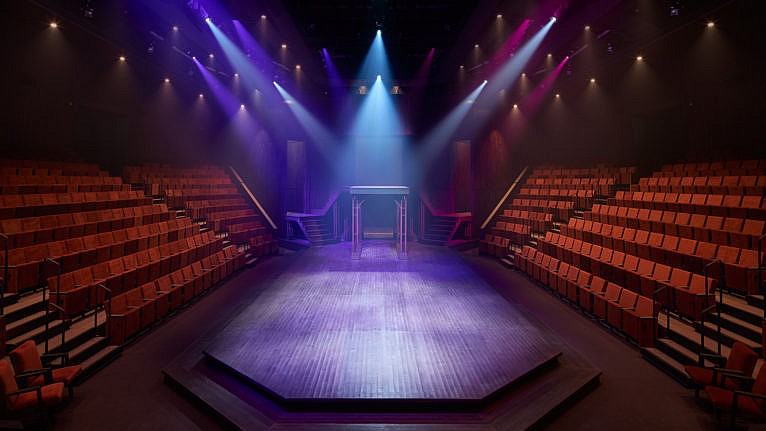 The festival purchased its very own woodlot in Tobermory to mill birch slats for the stage. (Photography by doublespace photography)

In August of 2019, Antoni Cimolino, the artistic director of the Stratford Festival, stood on a platform under construction, a blue light shining brightly off the metal scaffolding. He had a big announcement to make: the following year, the festival would open the long-awaited Tom Patterson Theatre—the crowning feature of Stratford’s $72-million renovation, set to house its must-see summer production of Richard III starring Colm Feore. “It’s going to be big, it’s going to be historic, it’s going to be surprising,” he said. “And it’s going to be fun.”

Two and a half years later, the theatre has yet to see a public audience. In 2020, with nearly an entire season’s worth of costs already sunk and roughly $4.6 million refunded to ticketholders, the festival’s season was postponed indefinitely. So was the opening of the state-of-the-art theatre, originally scheduled for June 11, the 100th birthday of the building’s namesake and the festival’s founder, a Stratford-born journalist and Second World War veteran.

MORE: This Winnipeg art gallery is a monument to Inuit culture

Since then, the structure itself has come to embody the crisis facing the entire performing arts industry: immeasurable effort and beauty brought to a standstill. Now that Ontario’s COVID restrictions have lifted, the future is looking bright. “That theatre, and all of the different rooms, are yet an unplayed instrument,” Cimolino says, days before rebooting rehearsals for Richard III, which officially opens in early June. “There’s a part of me that is waiting for the other shoe to drop. But what do they say about a pleasure deferred?”

The theatre was originally constructed as a dance hall but was used for concerts and productions when the festival began in 1953, hosting Marcel Marceau, Glenn Gould and Oscar Peterson. It remained an audience favourite, despite having virtually no theatrical infrastructure and doubling as a badminton court in the winter.

Siamak Hariri, a co-founder of the Toronto-based architecture firm Hariri Pontarini, visited the theatre as an audience member before winning the contract to design the new 77,000-square-foot complex in 2017. “The whole thing was clearly makeshift,” Hariri says. “But there were elements of it that were brilliant—the intimacy, the warmth—and we made sure to honour those. It should have nobility, but not to the point that you have to wear diamonds to go.”

Situated along the edge of Stratford’s Avon River, the new Tom Patterson’s curved shape reflects the swirls and eddies of river plants. The intent is for audience members to similarly gather in conversation, as if moving with the current. The exterior is covered by a veil of Spanish bronze beams and Italian glass, which act as a translucent barrier between the nature outside and the art inside. At its centre, the 600-seat theatre and its stage are surrounded by a drum of sound-absorbing Danish brick. A pillar of limestone from Owen Sound stands beside the outdoor patio—a rough offcut that Hariri describes as the crust of the bread. “It’s the kind of building where, when you step into it, you feel a little weak in the knees,” he says. 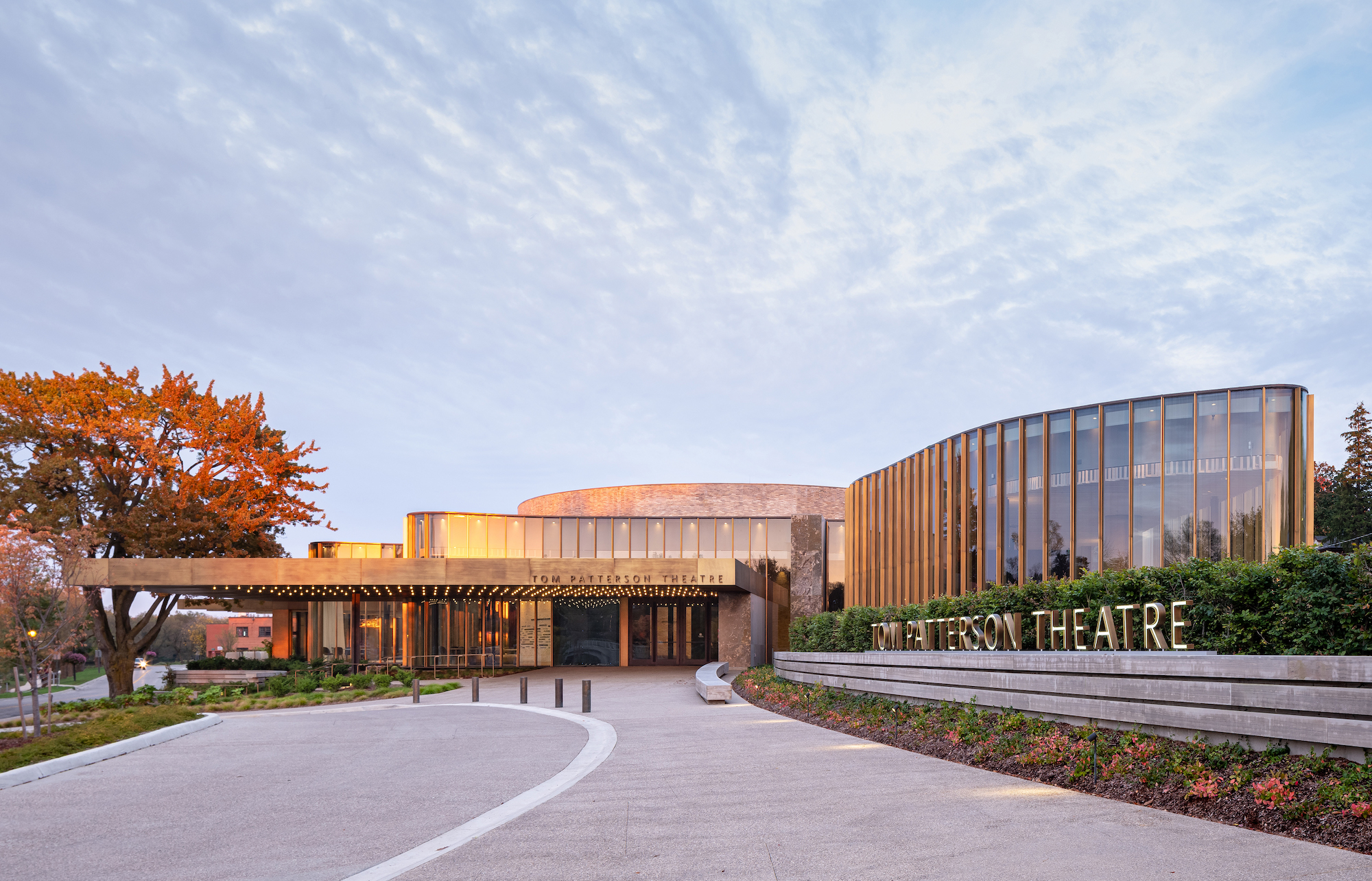 A far cry from its badminton-court days, the new Tom Patterson includes no small amount of theatrical technology. Flexible lighting systems operate more like drone controllers than a traditional manual grid and follow-spot system. It’s also one of the first theatres to use unobtrusive sound equipment to evenly disperse voices and sound effects across a tricky space—speakers have been discreetly built into steps by the front row, for example.

The stage itself is constructed from slats of Canadian birch on a giant trap door, so anything can emerge from underneath. The wood was hard to find: the festival ended up buying a woodlot in Tobermory to mill the trees into lumber. That story has already taken on a Shakespearean life of its own—local residents have asked whether the festival now owns its own Macbeth-ian forest.

There’s a mythical quality to the new facility, now so close to its debut production: actors and crews are rehearsing in masks and greeting each other with elbow bumps; costume and set shops are buzzing; the team is buffing out any leftover scuffs from construction and performing final safety checks. Downtown, Stratford’s hotels and restaurants—which serve about a million tourists in a typical year—are staffing up for the summer.

Still, there’s a sense of reservation. Even an experienced actor like Colm Feore, poised to make his delayed appearance as the titular Richard III, says he’s terrified. “I was convinced that when we finally came back, we would be announcing our victory over COVID and resuming our collective Canadian life—that we would have succeeded by the very fact that we were there in a theatre together, speaking to each other,” Feore says. “I think we are still a little damaged by it all, trying to crawl our way back to confidence.”

READ: How to fight the climate crisis with electricity

According to Cimolino, the first days back in rehearsal were exciting, if a little nerve-racking. “We seem to have new eyes and a renewed sense of excitement—even wonder,” he says. “Dare we believe we will be able to do what we love once again? Everyone is collectively knocking on wood.”

Of course, nothing is for certain, but the plan is this: On June 4, Richard III will finally officially open, along with the Tom Patterson Theatre itself. Ten productions will roll out through all the Stratford Festival venues, featuring an ensemble of 125 actors.

When Cimolino put out the call for architects, he was looking for a building designed to take the festival into the next 50 years. To Hariri, that is what they’ve created, in spite of the circumstances. “The building has this signal beacon,” he says. “It’s saying, ‘No, we’re not anywhere near going away.’ If anything, this shows our deep commitment to make things happen.”