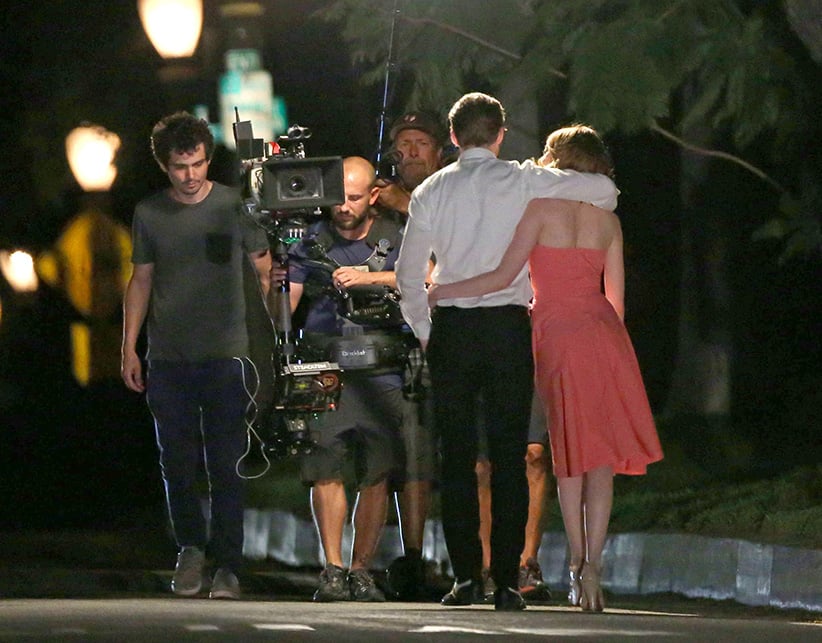 Chazelle (left) wrote La La Land years ago with Gosling and Stone (right)
in mind; only after Whiplash’s success did he get to make the film he’d always wanted. (Miguel Aguilar/PacificCoastNews)

Watching the Oscars tonight, I’ll be rooting for Moonlight over La La Land. But in what has turned out to be a David & Goliath culture war in the contest for Best Picture, I’m alarmed by all the ideological venom that is being directed at La La Land“. A recent Guardian piece, for example, claimed its expected Oscar victory would be a “disaster” for Hollywood. Really?

Stigmatized by success, La La Land has been  cast as a flashy villain in a Hollywood pageant that’s become painfully partisan — as if this stylish confection of song, dance and thwarted romance represents everything that’s wrong with America. Hey, It’s only a movie. And only a musical at that. Don’t get me wrong, Barry Jenkins’ Moonlight is the more remarkable, original and relevant film, a low-budget miracle that illuminates issues of black sexuality in a way we’ve never seen before onscreen, and with a lyrical beauty that doesn’t have a trace of didactic messaging. But that doesn’t diminish the feat of Damien Chazelle’s studio extravaganza.

RELATED: Why ‘Moonlight’ is fully deserving of its high-voltage buzz

Personally, I loved La La Land — the joy of watching it — which I don’t want to revise, and feel no need to defend or apologize for. I can appreciate why others are allergic to it or bored by it. It’s not for everyone. But the level of political vitriol levelled against it seems unwarranted, and disturbing.

La La Land is a showbiz fable about a romance between a couple of ambitious, frustrated artists. It’s also a miraculous triumph by a young filmmaker whose valiant struggle to make the damn film has more of a fairy-tale ending than the movie itself. In an effort to amp up La La Land’s David-Goliath duel with Moonlight, some critics have targeted the film’s racial complexion, complaining that it whitewashes the black roots of jazz by presenting a white hero (Ryan Gosling) as a noble jazz purist while his black musician friend (John Legend) has scored success via commercial compromise. But would flipping their roles be more interesting or “correct”? (In fact, Legend’s character gains the cultural high ground in a juicy scene where he puts the Gosling’s character in his place with a smart, stinging reprimand.)

The Guardian piece also accused its characters of narcissism, as if they were somehow retroactively infected by Trump’s pathology.  That’s the kind puritanical swipe that can levelled against any artist who has the requisite level of obsession make it in showbiz. And it’s not as if the film doesn’t wrestle with the conflict between relationship and career ambition—it’s what powers the narrative.

Anyway, enough of defending the movie, which I said I wouldn’t do. I just get nervous when, in a time of political crisis, there’s a righteous rush to scapegoat easy artistic targets. An escapist showbiz fantasy like La La Land is not the enemy. There’s no shortage of more qualified targets. As for my original thoughts about the movie, here’s what I wrote before it became blessed, and cursed, by its 14 Oscar nominations.