The acclaimed violinist is coming to Ottawa for a concert based on the time he busked for rush-hour subway crowds, and had adults ignore him—and kids notice 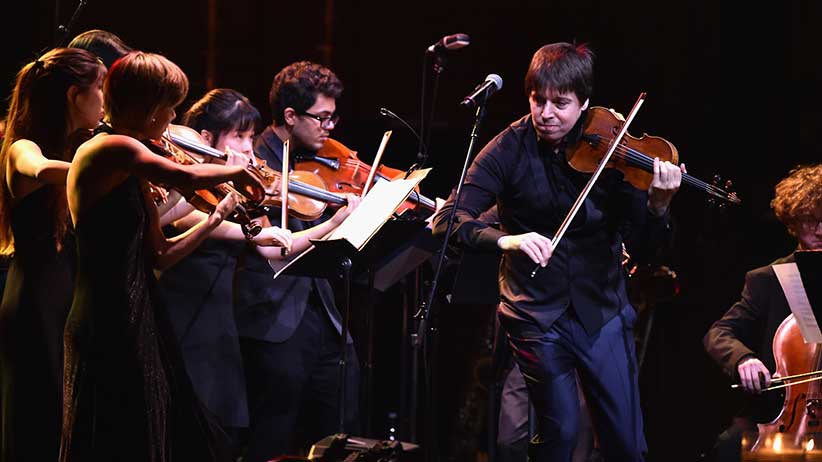 Joshua Bell was already among the world’s most famous classical musicians when he agreed to play some Bach on his violin in a Washington subway station in 2007, making himself the active ingredient in an experiment cooked up by the Washington Post. The idea was to use hidden cameras to record how the throngs would respond to an anonymous, ingenious busker. Although shockingly few adults paused to listen, just about every kid who passed by at least tried to stop, before being hurried along by some distracted grown-up.

The resulting story garnered worldwide attention, and was given another life in 2013 as an award-winning children’s picture book, The Man with the Violin, by Canadian writer Kathy Stinson and illustrator Dusan Petricic. That book, in turn, has been transformed into a concert piece, with narration, animation and original music. Bell performed the multimedia piece last winter at Washington’s Kennedy Center, and he travels to Ottawa for its Canadian debut on Dec. 20 at the National Arts Centre. He spoke with Maclean’s about the unexpected lasting impact of this story.

Q: Playing in a subway station might have come off as just a gimmick, and yet it obviously got at something deeper. Has it surprised you?

A: Gimmick is a negative word, but it sort of was a gimmick, just a fun little stunt. I did it out of a sense of fun and adventure. I was very surprised by the reaction. It sort of captured the imagination of people, who took different things out of it that may or may have not been in there. It’s been over 10 years. In some ways, I’ve had enough of talking about it. On the other hand, it has had some nice repercussions, one of them being this sweet children’s book, and now this project that we are doing in Ottawa, which I enjoy very much.

Q: It’s the story of a boy who wants to listen to the violinist in the subway, and his mother, who is in too much of a hurry. The theme is attentiveness, or openness, or just being able to notice things. Why do you think that struck a nerve?

A: I think that’s a major subject of concern and a thing we’re dealing with these days. Just the speed at which we move, everything getting faster and faster. Social media puts us inside our phones and our computers and our headphones, and we’re not connecting so much with our outside environment. Even when people go to the Grand Canyon they’re more concerned about the selfies than actually looking at the canyon.

I see it with my own kids—the addiction to needing things fast, never pausing to just see what’s around us and connect with our fellow human beings in real time. The story touches on it: This boy is someone who notices things. In the story his mother was kind of rushing him off to wherever they were going, and he noticed that something was up.

Q: When we consider classical music and kids these days, we often talk about their mental development, something beyond just the pleasure of music. What do you think about all that?

A: I think if there’s ever been a time we need music more, it’s now. For our kids, it teaches you to take time, to listen, to work together, to listen to other people, and to use your brain. That’s why classical music doesn’t work when you throw it at people in a subway platform while they’re rushing to work. Classical music is something that needs to be contemplated, you have to be completely present with an active mind that’s working. It’s not background music.

Q: It’s sure used that way, though.

A: I find it amusing almost. You have a Beethoven symphony in the background of a restaurant, playing at low volume. You might as well have a Shakespeare play kind of running in the background. It doesn’t make any sense at all.

Q: You’ve done The Man With the Violin once at the Kennedy Center. You’ve got animated images behind you, a narrator, an original suite for violin and orchestra. What’s it like to perform in this way?

A: Anne Dudley wrote this very descriptive music that really goes with the story and with the narration. It could work without the animation, but the animation just adds another layer—and it’s brilliant animation. It’s just a lot of fun.

Q: And it must be an interesting change of pace for a violin soloist like you.

A: Being a classical musician, you’re doing many things anyway. One day you’re doing Bach concerto and the next you’re doing some avant-garde thing. It’s just another hat that I’m allowed to wear. I’ve done things where they’ve tried to cross media that were not successful. In this case, this idea was built this way and each element enhances the others. This one really works.

Q: You mentioned that you have kids. Can I ask how old they are and if they like The Man With the Violin?

A: They came to Washington and saw it. They are a 10-year-old and twin seven-year-olds, so it’s right up their alley and they loved it. It’s a story about a kid, so they can they can relate to it. And it’s new music, but it’s very melodic and evocative. I think any child of any age would enjoy it.