Sewers are dark, ugly places, out of sight and unknowable. But not in Michael Cook’s world. His photos pull the intricate tunnel systems out from beneath the ground, and render them beautiful. Fitting his lighting equipment into a backpack, the 31-year-old landscape architecture student has travelled through sewer systems beneath Toronto, Hamilton and other southern Ontario cities over the last decade.

It began when he was exploring streams in Burlington. Some had been rerouted underground, and so he simply followed. “These are all completely dark spaces,” he says. “At the same time, there’s constantly evidence and intrusions from the city above. You hear traffic, you hear people talking.” The tunnels range from 100-year-old brick pipes to ones with modern concrete walls. He’s travelled 55 m down into the pits of old hydro-power stations near Niagara Falls—engineering feats in their time, but long ago left to crumble.

Because sewers are forbidden places, the images feel innately covert. Cook is wary of sharing too many details about exactly how, and where, he finds an entrance, but it takes planning and research into both the historic landscape and contemporary layout of tunnels. “I’m not just dropping into some hole without knowing what I’m working on.”

By showing where water flows beyond the drain, Cook hopes to highlight the stressed water systems that our major cities depend on—in Toronto, six million people rely on one watershed. “This is a critical question for urban resilience,” he says. Perhaps because of the tunnels’ hidden nature, his photographs compel us to stop and take a look. 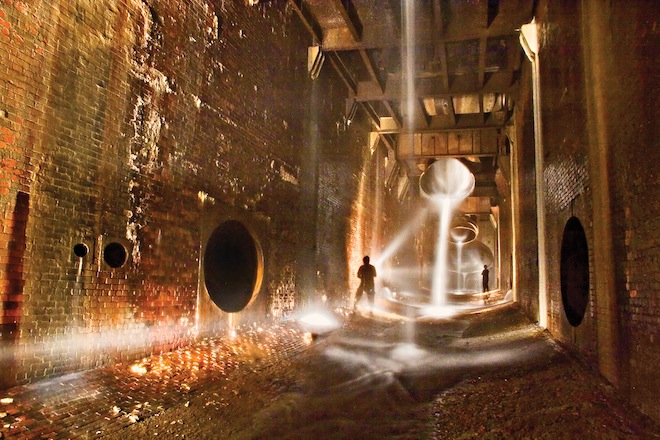 Ground and riverwater continues to drain from the turbines at the William B. Rankine Power Station. The wheel pit is 180 feet below the Niagara parks, and water flowed from here through a 670-metre tailrace tunnel to the lower Niagara River. The station was commissioned in 1905, and shuttered in 2005.