Katie Couric's 'Under the Gun' looks at what has changed in the gun-regulation since the Sandy Hook school shooting. A lot, it turns out, but for the worse. 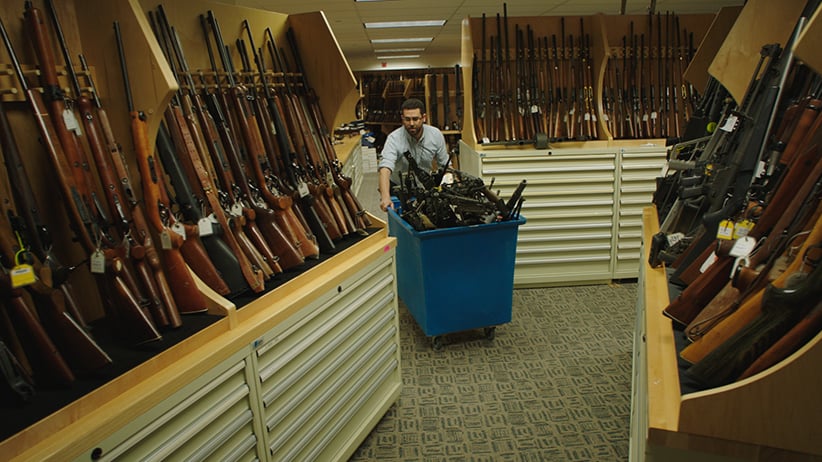 A still from Under the Gun/Hot Docs

As the story continues to repeat itself, artists—especially American filmmakers—are grappling with it in their work. This year we’ve seen films like Newtown, a documentary about the years after the Sandy Hook Elementary shooting, and the experimental drama Dark Night, which fictionalizes a shooting inspired by events in Aurora.

At Hot Docs this year, the film most directly challenging the matter is Under the Gun, a documentary by TV journalist Katie Couric and filmmaker Stephanie Soechtig. Their second collaboration after Fed Up, their 2014 wake-up call on the rise of childhood obesity, Under the Gun seeks to disarm gun lobby propaganda while re-framing the violence as what it really is: an epidemic.

“We need to start treating this as a public health issue,” Soechtig said in an interview after the film’s Sundance premiere. “Thirty-three thousand people are dying every year from this. If it was a disease, we would certainly be devoting more resources to it.”

Under the Gun opens with an alarming statistic: that by the time the end credits roll, 22 Americans will have been shot—and six of them will die. After the rise in mass shootings since 2011—a disturbing trend the film tracks with saddening clarity—Couric and Soechtig wanted in some way to disrupt the cycle that occurs every time a mass shooting happens. “Breaking news,” an anchor will read, about to report on the latest tragedy. Then: shots of a grieving public. Prayers and thoughts go out. Weeks later the cycle repeats and little has changed for the better—even after Sandy Hook  (or “12/14,” as in Dec. 14), which is often referred to as a watershed moment for gun violence in America.

Here the film pauses for a moment, because it’s not entirely true that nothing changed since Sandy Hook. A lot of things changed. In fact, Under the Gun reports, approximately two-thirds of all legislation passed after Newtown actually expanded gun owner rights and eased restrictions on obtaining a gun, a backwards irony that speaks to the importance of the conversations Couric and Soechtig want to have.

Conversations like an interview with the inspirational former Arizona representative Gabrielle Giffords; a visit with the parents of Jessica Ghawi, an ambitious young woman who survived a shooting at Toronto’s Eaton Centre a month before losing her life in a Colorado movie theatre; and a hopeful discussion with black mothers in Chicago who witness tragic loss almost daily. “What can we do? Why is this happening?” Couric asks, her trademark optimism informing her concern. “Can we all get together and do something about it?”

Chicago is part of Under the Gun’s most important reminder: It’s easy to compartmentalize the problem of gun violence as unpredictable mass shootings, but the reality is that 12 people were shot in the Windy City on January 6th, 2016, the day President Obama unveiled his executive actions to curb gun violence. Four died. Feeding the crisis are “bad apple” gun stores—of which Chicago has plenty—that look the other way when dealing to shady individuals like gun traffickers.

That’s why the documentary is more than a bitter indictment of the Second Amendment: it’s an examination of the gun industry at large. It debunks the fear tactics and misinformation trumpeted by the National Rifle Association, a once-respectable entity that now exists as a den of demagoguery.

“How on earth would we ever confiscate 350,000,000 guns in this country?” Soechtig says, referring to the NRA’s claim that legislation would take guns away from legitimate owners.

America is a country with more gun stores than McDonald’s and Starbucks combined, a context that’s important for Soechtig and Couric, who went out of their way to include more voices from gun owners. “If in fact 74 per cent of NRA members do favour universal background checks,” Couric says, “I want to hear from those people.”

And there’s the film’s silver bullet: gun violence should be seen as a bi-partisan issue, as 90 per cent of Americans are in favour of universal background checks on gun purchases (the film underlines the key words “well regulated” in the Second Amendment’s definition of a “well regulated militia.”). Regulated gun ownership shouldn’t be fraught with political debate, because only a fringe minority do not wish there were “things in place that keep guns from winding up in the hands of criminals,” Couric explains.

“When I go to a movie that’s really crowded or I go to a Broadway show or I’m at a sporting event, I think about: Gosh, could somebody come in here?” Couric admits. “What kind of carnage could they cause?”