King Lear among the lobstermen

A review of 'The Lobster Kings' by Alexi Zentner 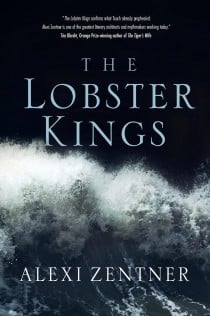 When we read an adaptation—a novel whose characters and plot are in some way derived from a previous work—a non-trivial part of our enjoyment often comes from recognition: there’s a thrilling satisfaction in spotting familiar themes, conflicts and characters reimagined in a new context. This is one of the primary pleasures of reading Zentner’s novel, which is loosely based on King Lear.

The Lobster Kings is narrated by Cordelia Kings, the eldest daughter of a moody patriarch on the fictional Loosewood Island, located off the eastern shores of Canada and the U.S., and claimed by both countries. The Kings have reigned here unofficially since 1720, when the island’s first inhabitant, Brumfitt Kings, arrived from Ireland. Cordelia, a lobsterman and self-described “heir to the throne,” is poised to take over from her aging father, Woody, as leader of the community. But she faces a threat from nearby James Harbor, whose lobstermen are encroaching on Loosewood’s waters; worse, some of them are running drugs. There’s domestic drama, too: Cordelia has fallen for her married sternman, Kenny, and clashes with her sisters, Rena and Carly, over the affections of their father.

Here, as in his debut, Touch—a finalist for the Governor General’s Award in 2011—Zentner proves himself a gifted architect of possible worlds. The island is richly imagined, and the Kings’ family history is soaked in mythology. Brumfitt, a painter heralded by art historians for his depictions of maritime life, purportedly married a woman gifted to him by the sea. And a supposed curse brings perpetual dread: the Kings receive the sea’s bounty in exchange for each first-born son. It’s this curse that Cordelia battles, but more than this, she fights its very premise: the notion that sons are more valued than daughters.

Shakespeare’s influence signals the novel’s major concerns—the often-thorny nature of parental love and sibling relationships, the capriciousness of a life’s trajectory—but the book, despite an action-packed narrative and an abundance of trauma, misses the play’s pathos. The novel’s meth-dealing villain, Eddie Glouster, lacks the charisma of the character for whom he’s named, and what’s meant to be a suspenseful climax feels predictable and unconvincing—which is a shame, because Zentner’s ﬁctional island feels uncannily real, a place where more credible battles might be fought and won.