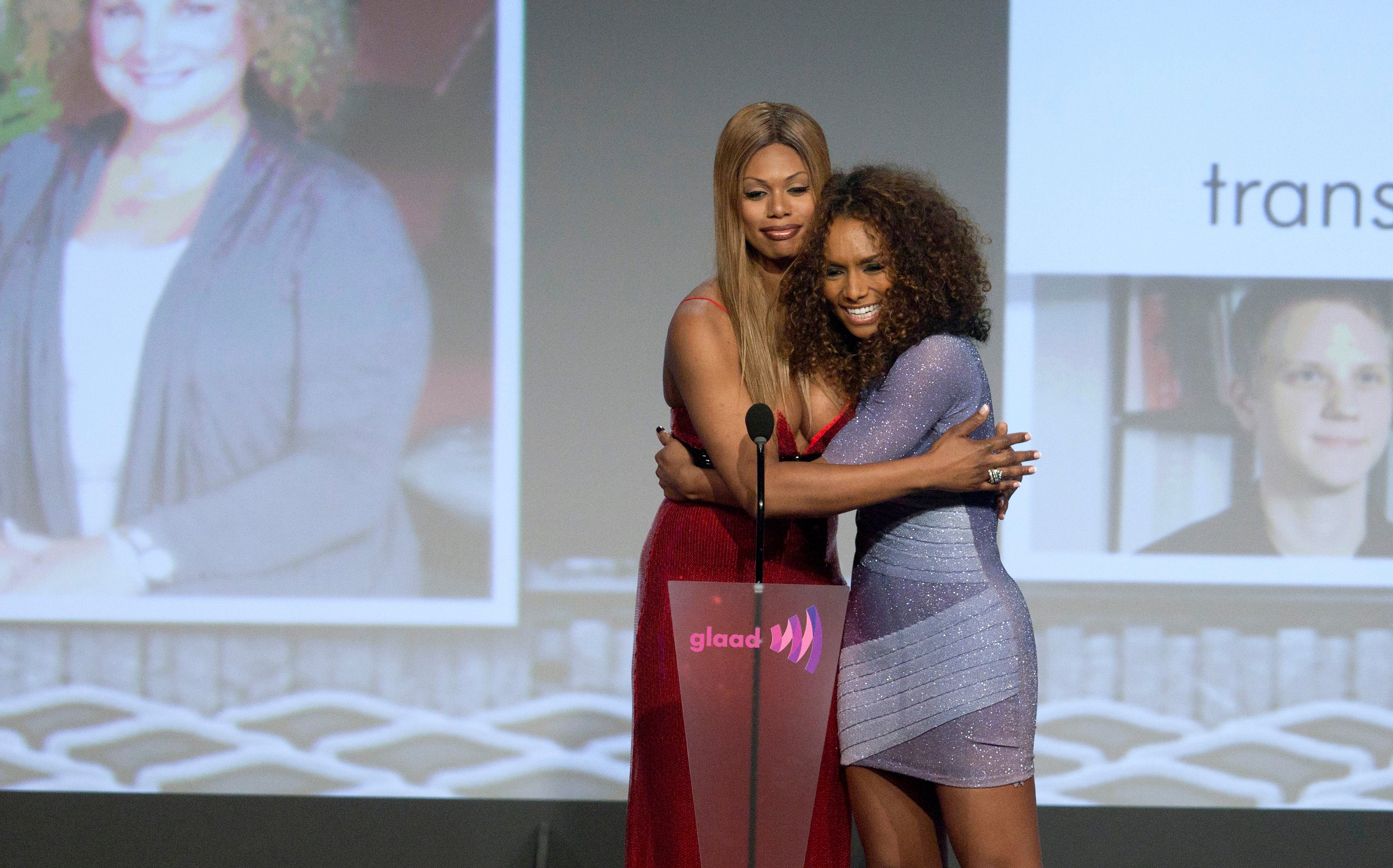 During his 20-year career as a U.S. Navy SEAL, Christopher Beck was trained to anticipate and negotiate hundreds of life-threatening scenarios. If an explosive is about to go off, Beck can disarm the bomb within minutes of contact. His frontline experience with sniping, rappelling and land navigation is so extensive that he managed to return home safely from 13 deployments—including assignments in Iraq and Afghanistan. He’s been honoured with a Bronze Star and a Purple Heart.

Nothing, however, could prepare the soldier for the postwar conflict of his first visit to a gay bar as a transgender woman. Speaking via phone from an RV in West Virginia, Beck describes it as more challenging than a mission in combat. “I had someone give me two snaps and say things like, ‘What’s wrong with your makeup?’ or ‘Where’d you dress, in a dark closet?’ I was there for 15 minutes and was so hurt I had to leave. It was harder than entering the Pentagon to go to work as a woman.”

As a response to detractors, Beck allowed a camera crew from CNN Films to capture his struggle with identity for a soon-to-be-released documentary called Lady Valor: The Kristin Beck Story. The film was recently screened at both South By Southwest and Toronto’s Hot Docs Festival but will be getting an international release date this summer. The former golden boy of the military reflected on going through gender reassignment surgery, hormone therapy and a name change (Christopher to Kristin); he also left his post, divorced his wife and informed his two sons about his big decision. The experience left Kristin Beck shunned by members of her family, the military and even some corners of the gay and lesbian community. “It was one of the toughest things I went through,” she admits of her acclimatization period.

Beck sees her documentary as a weapon of mass information; one of its main goals is to reveal the reality of gender reassignment. Instead of focusing on the medical and technical spheres of transformation (surgeries, doctors, etc.), the doc’s two directors—Mark Herzog and Sandrine Orabona—sought to showcase a much more human and emotional side of trans life, one Beck captured in Warrior Princess: A U.S. Navy SEAL’s Journey to Coming out Transgender, a memoir she co-wrote with psychologist Anne Speckhard.

“This is a face of transgender people that we don’t really get to see,” Beck says. “I’m not a glamorous, superhuman drag queen, I’m a working woman who dresses and lives like someone who works nine-to-five.” Another goal was for her story to reach small towns and rural areas, much like the Pennsylvania farming hub she grew up in. “Having that direct exposure to middle America and middle Canada—and giving them a story that makes them a little uncomfortable and brings them something that they might not understand—is always a good thing.”

Lady Valor—a title that aptly describes Beck’s resolve (she continues to give university lectures and act as a consultant with the Pentagon despite getting death threats)—comes at a time of unprecedented popular culture interest in trans. One of the FX network’s top television series, Sons of Anarchy, has a transgender character played by actor Walton Goggins. Jenna Talackova, the Miss Universe Canada contestant who famously got a ban on transgender contestants lifted by the pageant, stars in her own Kardashian-esque reality TV show. Iconic fashion photographer Bruce Weber—taking a page out of a Givenchy campaign featuring model Lea T—recently cast transgender models in a fashion campaign for the luxury retailer Barneys.

The standout figure in all this flurry of activity, of course, is advocate/actress Laverne Cox, who graces the cover of this week’s issue of Time magazine. Cox is the breakout star of Netflix’s popular prison drama, Orange Is the New Black, which begins airing its second season next week.

Cox, an academic, writer and film producer as well as performer, has been fighting for trans rights well before she had her first major guest spot on Law and Order and appeared in the reality show I Want To Work For Diddy in 2008. She says trans issues weren’t broached so intelligently five years ago. “I’m not naming names because I’m a working actress . . . but let’s get real,” she says via phone from New York City. “We’ve had such a wave of trans-ploitation films and TV—but that’s changing.” She is aggressively seeking to be a part of that change; she’s producing a documentary on transgender teens as well as one on CeCe MacDonald, an African-American trans woman who served a 41-month prison sentence in a men’s prison in Minnesota. MacDonald’s crime was fighting back in a bar after she and a friend were subjected to racist, homophobic and transphobic insults and had glasses hurled at them; one of her attackers died in the ensuing bar brawl. “We are in the midst of a revolutionary moment,” says Cox.

Even a few years ago, the current profusion of trans characters would have been unimaginable. A trans character was more likely an afterthought in a script, treated as a cliché or a freak. Most had more in common with Jared Leto’s trans character in Dallas Buyers Club, an Oscar-winning role that some critics have protested, saying it mirrors the offensive Mammy caricature in Gone With the Wind. On the fourth season of the popular reality series Project Runway, in 2008, fashion designer Christian Seriano used disparaging phrases such as “hot tranny mess” to describe inelegant or unstylish people. The word seeped into mainstream vernacular.

“We’ve had years of being at the end of the bad jokes and getting our bodies sensationalized,” says Cox, “but we have since learned to speak up. Transgender people in social media began standing up and saying, ‘This is not me and this is not acceptable.’ ”

Certainly RuPaul’s recent defence of the words “she-male” and “tranny”—liberally used on his popular reality show, RuPaul’s Drag Race—have come with consequences; the Logo network, which airs the show, has distanced itself from his comments and made a statement that it will not feature “anti-trans rhetoric.”

Kristin Beck thinks the language is important. “I am not a tranny or a she-male,” she says. “I am a human being. All trans people are human beings, and if we accept a term that is derogatory and offensive, well, what’s next? That verbal abuse leads to abuse. You’ve seen that throughout history,” Beck says, “going back to Germany in the First World War and all kinds of slang and derogatory terms made for Jewish people. The same happened in the Second World War, when many tried to diminish the humanity of the Japanese.”

Many see the apparent trans moment we are in as a sign of progress, but there is a dark side to all the exposure. On the talk show Fox & Friends, Fox personality Brian Kilmeade called being transgender a fad of sorts, saying “it’s in vogue . . . like bellbottoms.” Cox thinks even well-meaning attempts to get at the “trend” are worrisome. “Trans people have been used as the new, cool thing—just as black or gay once was.” Along with the idea of trans people “trending,” she warns, comes the idea that one day “we may be ‘out of fashion.’ ”

As a counterpoint, people like Toronto-based photographer Samra Habib are working to remind us of the diversity and vulnerability of trans lives. Habib’s upcoming exhibit, titled Just Me and Allah: Photographs of Queer Muslims, which includes portraits of trans and non-gender conforming Muslims, goes on display in the Canadian Gay and Lesbian Archives on June 18 (in conjunction with Toronto’s World Pride celebrations).

The show came together after Habib posted an invitation for subjects to be photographed and interviewed on Facebook. The resulting videos and images of Canadian-based trans and queer men and women explore what she calls “the pluralistic relationship” between Islam and members of the queer and transgender community. Habib—whose day job is as Glow magazine’s online editor—also spun off the exhibit into a Tumblr page that has already been posted by Buzzfeed, inciting both rage and praise. Habib was prepared for both. “The Internet has become a meeting place where experiences are validated—you can call it ‘the new mosque,’ ” she says.

Of course, Habib is looking at the intersection of two vilified populations. “There’s always a new cliché enemy in Hollywood—trans and Islamic people have both been targets,” she says. Another aim of her project was to shed some light on some of the roots of Islam, which she insists are, contrary to Western belief, quite progressive. “There are lots of examples where the Prophet Mohammad was an advocate for gender rights.” She sees an upside to even the negative attention. “I think when a group becomes such a big target, there is a tendency to explore why, and that is what I think is happening right now.”

Beck feels evolution is inevitable. “I think that sooner rather than later we will see a trans person star in a sitcom or win an Oscar and that will change a lot of things,” she says. “And it won’t be in a role that [casts] a trans person as a street walker, or deep into drugs with a drag queeny look. When Ellen [DeGeneres] first came out as a lesbian, she was pretty much shut out of Hollywood too. Then she proved to them that she can still do a good job. I think she became funnier because she was true to herself. People loved her more because of it.”