Life on Mars, as envisioned by Ridley Scott

Disco-fueled and wisecracking, The Martian is a space survivalist epic for our times 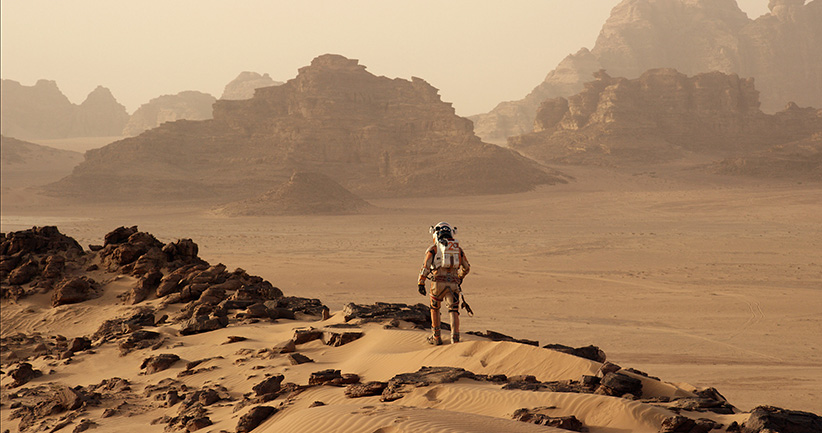 Matt Damon’s new movie proceeds from a simple, totally harrowing proposition: What if an astronaut were marooned, all alone, on Mars, with nothing to listen to but disco music?

Based on Andy Weir’s bestselling novel, The Martian strands near-future NASA botanist Mark Watney (Damon) on Mars after he’s presumed dead following a devastating dust storm. While the rest of the crew is en route back to Earth, they’re informed Watney is alive, surviving on his wiles, a crop of potatoes seeded in Martian soil, and a left-behind laptop loaded exclusively with plucky disco tracks. At one point, Watney rejigs a space shuttle to plot an escape to the tune of ABBA’s Waterloo; something of an odd choice, given the song’s theme of both romantic and historical defeat.

Related: The interview: Matt Damon on living like a Martian

It’s tempting to view The Martian as a riposte to Christopher Nolan’s recent ponderous space-travel epic, Interstellar. In that film, Damon cameos as an astronaut similarly stranded solo on a particularly unforgiving planet—driven to madness and cowardice by his time in isolation. And yet The Martian’s almost the reverse-shot of Interstellar, with Damon recast as the resilient, Robinson Crusoe-ish hero—with the swinging sounds of 1970s and ’80s discotheques.

Damon’s exposure to that music during the making of The Martian didn’t make him a fan. “I come down even more firmly on not liking disco than Mark Watney does,” Damon chuckled, hunched in a comically oversized hotel wingback chair during the 2015 Toronto International Film Festival. “I can live without it.” Damon’s a Stones guy. A Springsteen guy. A U2 and Pearl Jam guy. A guy who says he’d be happily stranded on the red planet with a limitless supply of pizza. (“There’s a lot going on in there, with pizza,” he cracks.) He is, by all appearances, the kind of sharp, smiley, affable, good-humoured, all-American nice guy he tends to play in his movies. The kind a team of astronauts would happily pull an outer space U-turn for, risking their own lives (and sanity) to rescue without giving it much of a second thought. Damon compares it to his turn in Steven Spielberg’s Second World War epic Saving Private Ryan. “Everyone’s trying to save me,” he says.

Damon’s irrepressible likeability feels like the real star—and understory—of The Martian. As his character plots to survive—and, eventually, escape—from his utterly inhospitable environment, his wisecracking sense of humour leavens the proceedings. This irreverence tempers the botanical and astrophysical jargon of The Martian. If Interstellar was about buying back into the dream of space travel, The Martian almost takes that dream for granted. Instead of debating the merits of space exploration, we’re now dealing with the nuts and bolts of it, cracking wise all the while.

“This is one of the better scripts I’ve had in a while,” says director Ridley Scott, who was brought on to the project after writer Drew Godard (who was originally attached to helm The Martian) vacated the director’s chair to work on the Marvel Comics super-villain team-up The Sinister Six. “Drew did a really good job of mining the book for those jokes,” explains Damon, “and adding a few of his own. That was a big conversation Ridley and I had early on: How do we retain the humour while maintaining the stakes?”

The Martian is, as Damon puts it, “the weird bizarro world” to Interstellar in another way: Godard’s script ditches the unwieldier philosophical/spiritual elements of Nolan’s movie—in which Matthew McConaughey saves the human race using nothing less than the power of love itself—in favour of a film that hews closer to NASA-approved hard science. “Basically,” says Damon, “the whole proposition was: Could the right guy, with the right training, survive in this inhospitable environment for an extended period of time?

Even beyond Interstellar, The Martin feels part of a recent movie trend in space survivalism. Nolan’s film tested humanity’s ability to survive in hyperbolically intense environments. (The planet that Damon’s character scraped by on is made almost entirely of glacial ice.) And, in 2013, Alfonso Cuarón’s Gravity trapped Sandra Bullock in outer space after her ship was destroyed by an eddy of orbital garbage.

Nolan’s movie played like a blockbuster tribute to the sci-fi spiritualism of Kubrick’s 2001. Cuarón’s was a large-scale, IMAX-sized cinematic spectacle, pushed along by cinematographer Emmanuel Lubezki’s dipsy-doodling camera movements. The Martian’s a more grounded affair. According to Scott, Godard conceived of The Martian as “a love letter to science.” It’s like a modern update of Ron Howard’s Apollo 13, fitted with state-of-the-art 3D action sequences and humour. It’s bound to appeal to a culture that’s more interested in space travel (and science, more generally), in which American astrophysicist Neil deGrasse Tyson and Chris Hadfield are pop-culture icons.

“I’m not really a nerd, in that sense of the word,” says Scott, bristling a bit at his film’s connection to the culture of science geekery. “I guess I’m a film nerd. I get into the details a bit. And nerds tend to like what I do. So I guess, maybe I am a nerd? I was never into physics, science, mathematics, algebra. I don’t understand it when it’s written down. I think visually. I think about how I’m going to illustrate these ideas.”

Scott thinks like a technician and a designer. His early sci-fi successes, Alien and Blade Runner, were distinguished by their elaborate world-building: their junky, morose, halfway rundown environments seeming a far cry from the sleeker steel-and-chrome sci-fi of films such as 2001 or the Star Trek series. Making a film about a man trapped alone on Mars, Scott’s job was similar to that of the Watney character: making something out of nothing.

“Science fiction is tricky,” says Scott. Coming from him, this is sort of like Mr. Christie telling you it’s hard work making cookies. “You’ve got to put another hat on,” he continues. “And I’m very lucky, in that I put that hat on way back when for Alien. I kind of just knew what to do. I’m very design-oriented. That’s how I was trained, as a designer. I often think of the realities of the situations, right down to the goddamn rooms and the chambers and everything else.”

This realism believably grounds the action. It’s not just the problem-solving, MacGyver-like plotting of the film—in which Watney resolves early on to, as he puts it “science the s–t” out of his predicament. It’s in the details. Watney’s Mars base camp becomes increasingly rundown and derelict, with walls and space suits plastered together with duct tape. For Scott, this realism, and adherence to a set of “rules,” draws the audience in, inviting it to solve each problem along with Damon’s character. “Audiences are quite smart,” says Scott. “You present them with a puzzle, and they’ll want to solve that puzzle. I worried some of this might be too dense, but they seem to love it.”

Certainly, The Martian’s world premiere at TIFF went over exceptionally well. Critics and audiences have hailed the movie as something of a return to form for Scott, after the (perceived) stumbles of the Alien prequel Prometheus, the Old Testament epic Exodus: Gods and Kings, and the frankly bananas Cormac McCarthy-scripted thriller The Counsellor. (As an admirer of these last two films, and much of Scott’s other more recent work, this writer doesn’t necessarily believe that Scott ever slipped from presentable form as a purveyor of large-scale Hollywood epics, at least, not in a way that would necessitate a return to it.)

Scott’s signature style doesn’t always serve the film; the exceedingly vast and epic scope sometimes feels unjustified by the material. Cutting between Damon’s survivalist plight on Mars and the efforts of a star-studded cast of NASA types—Chiwetel Ejiofor, Jeff Daniels, Sean Bean, Mackenzie Davis—this sometimes feels like a small movie lost in a big movie, like a skinny, pigeon-chested kid afloat inside one of those oversized NASA space suits. Space sometimes has that effect on filmmakers.

For Damon, The Martian has an important message, stressing as it does the importance of human ingenuity and the imminent threats facing that fragile blue marble we all call home. “I definitely feel the species has to figure out a way to get some of us off this planet,” he says. “We’re one extinction-level event from the obliteration of the entire human species, from all of time.”

When his crisis comes, and humanity is forced to flee Earth, at least the astrophysicists and jet fuel laboratory tests and space botanists will have The Martian to refer to as a handy cinematic guide illustrating what to do in the event that one of their best and brightest gets shipwrecked on some faraway planet. Lesson No. 1? Make sure to load up a USB key with something other than ABBA’s greatest hits.