Canada's legendary bard swears he’s given up on songwriting. But performing? Never. 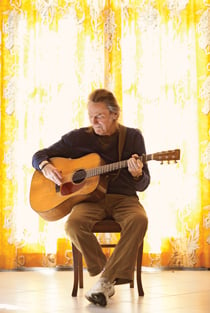 Gordon Lightfoot doesn’t much like his house. It’s a generic monster home in the posh enclave of Toronto’s Bridle Path, and barely older than his car, a 2001 Chevy Malibu, of which he speaks more fondly. (“It runs like a top. Just got a new set of brakes put on.”) His second wife, Elizabeth Moon, pushed him to move out of the city centre and sell his old Rosedale mansion, which had turrets and ghosts, and guests that included the young Bob Dylan. “I loved that house,” says Lightfoot. “But I was asked to move and I moved. I got outvoted.” Lightfoot and Moon separated in 2003, then divorced last year, ending a two-decade marriage that produced two of his six children. “I would have stayed married,” he says. “I would have seen it right through to the end. Making a change like that at my age requires a lot of thought.”

Now 73, Lightfoot lives alone in the house he never wanted, though four of his children live in the city and come around a lot. “Up here is good,” he says, as if still trying to convince himself. “There’s lots of parking for everybody.” We’re sitting in the singer’s home office and rehearsal studio, a small room off a grand marble-tiled foyer. Full of old furniture, guitar amps and floor-to-ceiling shelves of tapes, it’s the man cave that technology forgot. Lightfoot does not own a computer, an iPod or an iPad. But two ancient cassette players sit perched on his desk. “I used to use them for putting down ideas,” he says, as he punches “play” on one of the machines. Out comes the tinny sound of him whistling a tune to an acoustic guitar. “There we go,” he says. “I got the melody and the chords.”

Canada’s most iconic folk troubadour—whose classics include Early Morning Rain, If You Could Read My Mind, Sundown, Canadian Railroad Trilogy and The Wreck of the Edmund Fitzgerald—swears he’s pretty much given up on songwriting. But he still loves performing. Next month he has a packed schedule of U.S. dates in the northeast, clocking up to 10 shows in 11 days, then he’ll swing through Ontario and Quebec in June. Meanwhile, his annual concerts at Toronto’s Massey Hall remain a hallowed ritual for his hometown fans. After playing a record 150 shows on the Massey stage, Lightfoot has culled them to create All Live, a CD of 19 songs that marks his first live album in 43 years, and only the second of his career.

He had originally planned to postpone its release until after his death. And, to borrow a phrase from Mark Twain, reports of his death have been greatly exaggerated. Radio airplay of his music suddenly spiked in 2010 after Canwest published a report confirming that Lightfoot was dead. The singer was on his way to the dentist when he heard the news. “That was an interesting day,” he recalls, with typical understatement. “We still don’t know where the story came from.” Even after the rumour was quashed, it had lingering aftershocks. “My eldest daughter, Ingrid, got very emotional about it in the evening. I had to talk to her on the phone. She was crying.”

Lightfoot did have a more serious health scare 10 years ago. Right before a concert in his home town of Orillia, Ont., he suffered severe stomach pains and was airlifted to Hamilton to undergo surgery for a ruptured abdominal aortic artery. He spent six weeks in a coma and endured four operations, plus a tracheotomy. He recalls gradually waking from the coma, which “takes two or three days,” and thinking: “What are we gonna do next?” While convalescing, he sifted through some 30 live tracks from shows at Massey Hall from 1998 to 2001. “I didn’t really want a live album out there,” he says. “I put it in my estate that it would come out after I was gone.”

There’s a droll irony in waiting to die before releasing a live album. But Lightfoot eventually had a change of heart as he whittled down the song list, and refined his mission with an exacting perfectionism. He was adamant that none of the tracks be remixed or overdubbed. “As soon as you start remixing stuff, to my way of thinking it’s no longer valid,” he says. “We didn’t want to correct any mistakes.” Though he didn’t want to tamper with the raw stage sound, Lightfoot devoted two years to what seems like an insane attention to detail—fiddling with volume levels. Concerts end up being recorded at various sound levels, which need to be smoothed out for a live CD. It’s not rocket science—until you hear Lightfoot talk about it. “Apparent levels are what you actually hear,” he says, explaining how they’re different than decibel levels. “You have to measure them by ear. That was my job, to match apparent levels. When it comes to apparent levels, I’m always learning.”

After two years of tweaking, the levels on All Live seem just fine. But Lightfoot’s vocals may come as a shock to those who know him only from his studio recordings. That bright beam of a voice has become thinner. And the jaunty, seafaring lilt is more mannered, as the singer leans on the consonants, often skimming over lyrics. It’s only natural. With rare exceptions (Tony Bennett), an aging voice will gather rust and change in timbre. For a Leonard Cohen or a Tom Waits, it’s an invitation to plumb uncharted depths of the lower register. Dylan plays with the corrosion of his voice like a distortion pedal, and reinterprets his old songs like a crazy cubist. Lightfoot is more like a meticulous impressionist, still clinging to the reed of his familiar tenor.

On the All Live version of If You Could Read My Mind, the elliptical quaver of his voice refracts the lyrics like ripples in a pond—adding another dimension of human frailty to the song’s elegiac tone. While it’s hard to imagine anything on All Live supplanting the original version, there is a heroism in Lightfoot’s steadfast grip on his repertoire. And it’s some repertoire, one that’s been covered by everyone from Elvis Presley and Johnny Cash to Bob Dylan and Barbra Streisand. Calling Lightfoot one of his favourite songwriters, Dylan once said, “Every time I hear a song of his, it’s like I wish it would last forever.”

For all their universality, his songs are indelibly Canadian. There isn’t a more panoramic vision of the land than Canadian Railroad Trilogy, or a more haunting epic of natural disaster than The Wreck of the Edmund Fitzgerald. This guy who can braid a love song out of “pussy willows and cattails” treats nature as his palette. A veteran of 10 marathon canoe trips, he seems to draw lyrics directly from the lakes and forests. He is our musical answer to the Group of Seven.

But some of his strongest songs have been forged from simple love troubles. “If You Could Read My Mind,” he says, “was about a period of my life I’d like to forget, the breakup of a marriage [to first wife, Brita Ingegerd Olaisson]. So I relive that every time I sing the song.” And Sundown, his biggest hit, arose from the three-year affair that helped derail that marriage—with Cathy Smith, who later served prison time for injecting John Belushi with a fatal dose of heroin and cocaine.

Lightfoot gave up drinking in 1982. By then most of his best songs had been written, and he feels no need to record new ones. “After a while, you’re just making structures. They don’t have that spontaneity that alcohol causes.” Still he toys with songwriting. “I’m working on one right now, but it’s not going to go anywhere because I’m not going to do anything with it.” He half-sings a few lines: “Are you an angel? Will you be friends with me? Are you an angel? Will you be endlessly in all of my dreams? I can see it by the light of day when you look my way.” He shrugs. “Just another love song. I’ve done my share.”

Some of his children have musical ambitions, including Meredith, 17, who has dropped out of school. She landed in the media spotlight last November when her father came by the Occupy Toronto protest to give her a sleeping bag. Lightfoot says most of his children play guitar. “You try to encourage them. But they don’t have theory. They don’t know the keyboard. I’m not a pianist but I studied the keyboard because it’s the root of everything.” Lightfoot also attributes his success to “the work ethic—write the music, write the chords. That’s what I keep telling my kids.”

These days his work ethic involves daily trips to the gym when he’s not on the road; his motto is don’t stop now. “I’m optimistic about my future,” he says. “I don’t have a plan but things are moving forward. Keep working out, keep hanging with the family. Maybe get the girlfriend here.” That’s Kim Hasse, 51, who lives in California and works in film as a background player. “We met a long time ago but I didn’t even know she liked me until 3½ years ago,” he says, “I don’t want to lose her. She’s got a wonderful personality.”

We tour the house, which is laden with mementos. Dozens of sailing ship pictures cover a wall. There’s a replica of the Edmund Fitzgerald, and a model of a cedar-strip canoe with a cigar butt propped in the stern—the last one left by Lightfoot’s long-time guitarist Terry Clements, who died last year. Lightfoot, who still smokes cigarettes, says he doesn’t think about mortality. As we gaze at his collection of paintings by the late Toronto artist Robert Markle, he says, “He ran into the back of a tractor in his pick-up near Owen Sound. If your motorcycle doesn’t get you, your pick-up truck will.”