'Master of None': The last acceptable ethnic cliché is dead! 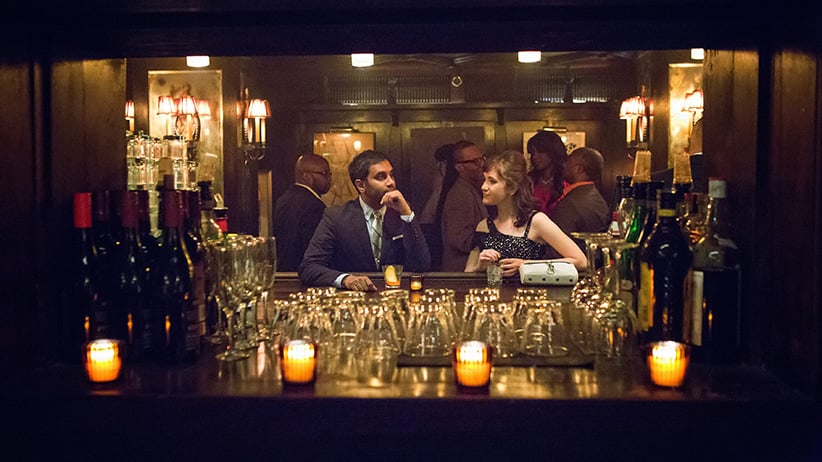 Aziz Ansari in his new show ‘Master of None.’ (K.C. Bailey/Netflix)

Aziz Ansari’s brilliant new Netflix series is an answer to yelling matches many Indians have had with their TV sets in the past 25 years. There was that accent actor Brian George adopted as the Pakistani restaurateur Babu on Seinfeld—and resurrected for the part of Raj Koothrappali’s dad on The Big Bang Theory—and that monkey-brains scene in Indiana Jones and the Temple of Doom. (How can Indians be famous for both holy-cow vegetarianism and eating monkey brains?) Then there’s the long tradition of brownface, from the Caucasian women who played Indian princesses in 1960s Hollywood films to Apu on The Simpsons, who is voiced, rather atrociously, by a white actor (Hank Azaria). It’s 2015; no one would think of unleashing a “me so solly” impression of a bespectacled Chinese person in pop culture. Yet somehow the Indian, with his thick, muddled accent, gets a reliable airing.

Indians may be the last acceptable target of friendly racism: That’s the whopper of an argument made in episode four of Master of None, which launched on Nov. 6. Created, written and co-directed by and starring Ansari—who made a name for himself as the slick, style-obsessed Tom Haverford on Parks and Recreation—Master of None follows a young single actor, Dev (played by Ansari) through his adventures and misadventures in New York. The wonderfully meta “Indians on TV” episode begins with a lark of a montage of subcontinental clichés in American television and film—which includes the revelation that the main Indian guy in Short Circuit 2 was, in fact, a white guy in makeup.

The storyline that follows explores trenchantly, and to great comic effect, the rules governing casting “ethnic” actors: the parts they can play, how they must play them, their allowable number. “Two is too many,” writes a network executive on an email inadvertently sent to Dev. Drama—and hilarity—ensues.

The episode is a brilliant parsing and takedown of television’s unwritten (and sometimes written and leaked) codes when it comes to “ethnic” content. But, more than this, the whole show mounts an ingenious challenge to such stereotypes. So you can’t have two Indians on a show? How about a show about an Indian guy with a Taiwanese best friend, who hangs out with a black lesbian—along with a white guy played by Eric Wareheim (of Tim and Eric Awesome Show, Great Job!) and several other Indians—and who has a black talent agent? Ansari’s show is a Royal Commission paragon of equal-opportunity casting, but the writing is so clever, the scenes so absorbing, you barely see it—except to wonder if its multi-culti overflowing-ness is another moment of Ansari taking the piss.

It’s not, in fact. “It wasn’t done in this way of a United Colors of Benetton ad,” Ansari says in an interview, laughing. “The Brian character is based on Alan [Yang], the co-creator of the show. Denise—we had an open call for that character. I read with so many women, and Lena [Waithe] was the funniest, and it just so happened she was an African-American lesbian woman, so we adapted the character to her. And Wareheim, who plays Arnold, he’s a good friend.”

The casting also reflects the creators’ own experiences. “I don’t hang out with five white people,” Ansari says. “I have a mixture of people in my friend group.” Ansari must also know some Indians who are not cab drivers or IT workers, because one Indian character is a kettle-bell-wielding, burpee-doing jock. (Whoever heard of an Indian jock?) In place of generic “Indian” references, Dev has a cultural specificity that’s groundbreaking for television. His dad is from Tirunalveli, a tiny district in southern India featured in a couple of flashback scenes, in which his family, like Ansari’s, speaks Tamil. (Tamil! An Indian language unheard of in North America, except as a modifier for the word “Tigers,” whose place of origin is, incidentally, a completely different country.) The parents are played by Ansari’s parents—a sweet filial gesture that also enables escape from a trend even more annoying than brownface. Let’s call it brownvoice.

That would be the generic “Indian accent” put on by actors and dinner-party comedians all over the Western world. Here’s the thing: There’s no such thing as an Indian accent. There are Punjabi accents and Malayali accents and Tamil accents and Bengali accents. They sound almost as different to Indians as Greek does from French or Latin. But outside India, all of this variegation gets flattened into butter-chicken-friendly “Indian.” Every culture outside of the homeland suffers this loss of regional differentiation to some extent, but the Indian diaspora may feel it more keenly, because of the wild differences—in languages, food, music, religious practice—between each of India’s 36 states and union territories.

The upshot: Even when there are Indians onscreen, Indians rarely get to see themselves represented. Nor are characters from the subcontinent given back stories, or the kind of nuanced roles that can carry a show. Like gay characters 20 years ago or black characters 10 years ago, they’re helpers and sidekicks, unless they’re hot women, in which case they can also star in beer commercials or play girlfriends (New Girl). There have been bright spots—Kumail Nanjiani as the mumbling Pakistani immigrant Dinesh on Silicon Valley, or Mindy Kaling’s bumbling, fantastically superficial Dr. Lahiri on The Mindy Project (who can not only play a romantic lead, but play it against such a dizzying number of paramours that the term “romcom” might not contain them). But Master of None is a quantum leap forward in an era in which shows such as Fresh Off the Boat struggle to find their way with ethnic casting and storylines.

In a sense, though, talking about the show as a model of diversity sells it short. Ansari and Yang have created an intelligent, funny show that is revolutionary in every sense. The show’s structure—each episode revolves around a different idea, such as “Parents,” or “Ladies and Gentlemen”—and its stylistic influences (naturalistic filmmakers such as Woody Allen, Hal Ashby and Robert Altman) allow it to upend TV’s tropes. “In real life,” says Ansari, “you don’t have lunch with the same four people every day.” The characters have parents, and grandparents and acquaintances. There are quiet moments, uncertain moments, tender moments (unamplified by Modern Family-style acoustic guitar riffs), throwaway bits of conversation—just as there are in life.

Verisimilitude drives the show’s decisions, and is a big part of why it has resonated so widely. It’s unusual, if not unprecedented, to have a TV show, let alone a comedy, reflect life so sharply. The “Parents” episode hit a particular nerve, sparking a wave of articles and social media posts, which intensified after Ansari wrote a moving Facebook post last week about the experience of working with his parents. “Indian parents were made for TV,” wrote Vulture. But this isn’t just about Indian parents. “It’s a story that millions and millions of people can relate to, and it’s never been told in this way,” says Ansari. “Everyone can relate to the idea of being an ungrateful kid! That’s everyone who has parents who did good by them.”

The show is a rebuttal to market arguments against casting too many ethnic characters—or too many old people, or anything else. “No one’s going to say, ‘I don’t connect with this old person.’ No one’s going to say, ‘There’s too much Indian stuff in it,’ ” says Ansari. “If it’s funny and interesting, people will watch.” Nor is there an “ethnic” market out there waiting to be tapped with canned “ethnic” shows. Yet executives routinely think the way to the Indian community is, as Ansari notes animatedly, “ ‘Oh, let’s do a show about a million Indian people!’ No. We can do a show with, like, two Indian people.”

Master of None is also insightful about relationships. It’s perhaps a beneficiary of research Ansari did for his 2015 book Modern Romance, co-written with an NYU sociologist. We can treat people like crap now, the unfailingly decent Dev quips before flaking out on a date. But mostly the show benefits from Ansari’s experiences, and Yang’s, and co-star Noël Wells’s, the product of searching, personal sessions in the writers’ room.

A recent review credited Ansari and Yang with creating a Louie for Millennials, but it’s also a funnier, more inventive Girls, where everyone isn’t white and privileged and moody, a less cynical Extras. Master of None plumbs the richness, and humour, of the contemporary urban experience: the travails of a childless man going to backyard birthday parties in Brooklyn; the delicate negotiating act we all face with parents; the bizarreness of dating mores. The show is about an Indian, but it’s not just about an Indian; it’s about young people, but not just about young people.

Questions swirl about a second season, but Master of None has already found a life past the 10 episodes released on Netflix. As Ansari quipped his way through the late-night circuit, cracking wise on the The Late Show about Stephen Colbert’s very white crew, or on Jimmy Fallon about Bobby Jindal, he and Yang and their cast had already launched a profound conversation about diversity of every kind in culture, and done it in such a funny, honest and good-natured way, it can’t be ignored anymore.