The Calgary-born singer and songwriter owes part of her success to an odd source: our military 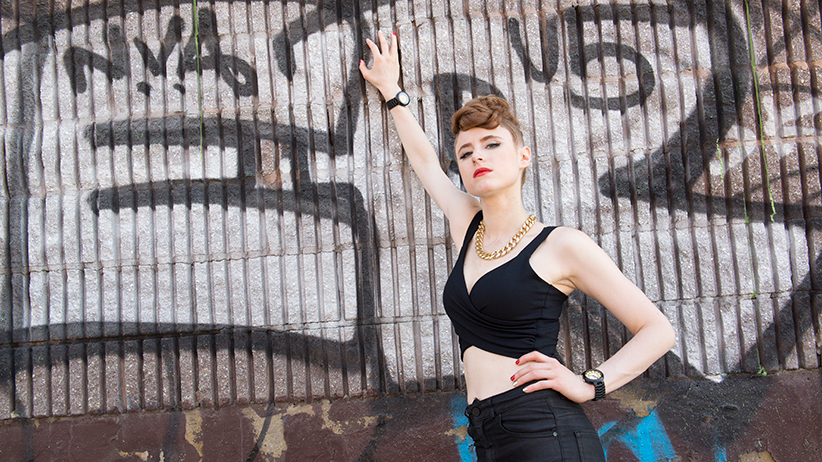 As a young girl, Kiesa Rae Ellestad used to wonder what it was like to be Freddie Mercury, performing at London’s Wembley Stadium for Live Aid. She thought of that this summer as she was being lifted through a trap door onstage at that very venue. When she emerged to see 88,000 people waiting to hear her hit, Hideaway, she says, “I froze for a second and had to gulp to get my first note, and then I didn’t want to get off the stage.” She was on a bill with Miley Cyrus and Pharrell Williams; her next goal is “to fill up the stadium on my own.”

Smart money wouldn’t bet against her. The Calgary-born singer and songwriter, now known by the mononym Kiesza, has racked up more than 60 million YouTube views for Hideaway’s video; the song hit No. 1 in the U.K. in April. Since then, she has begun reaching escape velocity toward stardom. In the five days before she spoke with Maclean’s last month, she’d been to four different countries and performed on Late Show with David Letterman, where she wowed the host by dancing through the crowd and into the street outside. Afterward, she was heading to the studio to record vocals for a “crazy” song she had written in Ibiza, Spain, with producers Skrillex and Diplo. With her trademark red “steamhawk” hairdo, swept toward the centre in vapour-like curlicues, she gets recognized, even in hipster-haunted Hoxton, the East London neighbourhood where she moved in January: “I don’t do a good job at making myself blend in.”

Kiesza attributes her success, in part, to an eclectic Western Canadian background—though “people sometimes just take what I say and add their own [ideas]. They’re like, ‘She was a code-breaker.’ No, I was a naval communicator.” She joined the navy reserves in high school; at 16, she attended summer boot camp in Borden, Ont., where she wore full uniforms with woollen socks in high heat, and was yelled at for a piece of lint on her bed. She was even gassed in a gas chamber—as part of training with a gas mask—to know what it feels like (“I’d say that’s the worst way to die”). She was too much of a non-conformist for the armed forces, but her training has stayed with her. It’s both a metaphor for her “obsessive” drive (“I was able to lock into the target,” she says of her gun skills, which won her the boot camp’s “top shot” award) and practical preparation for a punishing pop star’s schedule: “The military taught me to go past what I think my limits are.”

Kiesza’s ﬁrst-ever fans were soldiers in Afghanistan: She sent them thousands of copies of her indie debut CD, recorded when she was 18 and studying music at B.C.’s Selkirk College, and she’s still in touch with some helicopter pilots on Facebook. At the time, her sound was folky. She had picked up the guitar and started writing songs on the decks of tall ships on which she sailed out of Victoria with the Sail and Life Training Society. From Selkirk, she transferred to Boston’s Berklee College and set her sights on the pop world.

At first, she focused on writing—Rihanna, Kylie Minogue and Jennifer Hudson have recorded her songs—but a partnership with hip-hop producer Rami Samir Afuni encouraged her to develop a sleek, contemporary sound with a dash of early ’90s dance-pop. Together, the two composed, recorded, mixed and mastered Hideaway in a 90-minute burst in May; its all-singing, all-dancing video—filmed in one shot, in two takes—reflects her show, where she somehow nails high notes while performing athletic routines. She broke a rib while rehearsing for the shoot, but kept mum: “If I told people, they wouldn’t let me do the video.” Afterward, she was laid up for a month—“isolated in a bed, controlling my breathing,” she recalls. “It drove me insane, ’cause I can’t stop moving, ever.”

“She’s a little stubborn,” says her choreographer, New York’s Ljuba Castot, “because she insists on doing as much as possible onstage. Sometimes I have to pry things away from her: ‘No, it’s OK that you just sing this part and let the dancers work.’ ” On her tour to promote the album due out in October, she also won’t use industry-standard guide vocals, i.e., singing along to pre-recorded, pitch-corrected tracks. “You have to make mistakes to get better,” she says. “I’m happy to do it right in front of people’s faces.”