“We are proudly Canadian and that comes through our approach, where everyone is welcome,” says acting coach Julian LeBlanc 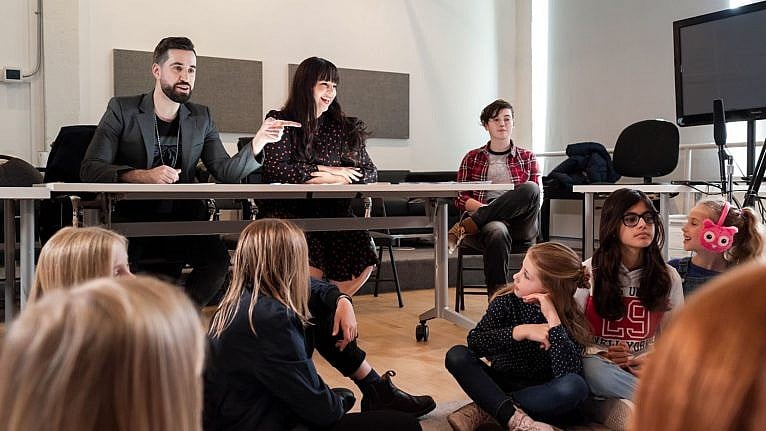 If you’ve scrolled through your favourite streaming service of late, it would be hard not to notice the sheer number of up-and-coming Canadian actors landing significant roles in smash-hit productions, including Netflix’s “Bridgerton,” “Stranger Things,” and “Riverdale.” Many share the same alma mater: The LeBlanc School of Acting. The Vancouver-based school uniquely equips its students on everything from how to nail auditions via Zoom, to strategically navigating the nerve-wracking waiting room before in-person auditions. The school’s CEO, Moncton-raised actor Julian LeBlanc, shares how he got into the industry and the exciting career paths his students are embarking on:

I grew up in foster care from age three to 18 in Moncton, New Brunswick. I got a sense quite early on that something about me was different. I kept seeing these picture-perfect families when I would go over to my friends’ homes and I knew that my upbringing was different. My dad has never been in my life, I still don’t know who he is, and my mom just didn’t have the means to take care of me. Bless her, she’s doing better now.

When I found dance, it was the first time I was able to express myself creatively. I could let my emotions come through and start to process some of the trauma that I went through. By 15 years old, I was playing the prince in The Nutcracker.

When I was 18 years old, my foster parents, Heather and Paul, did something really truly amazing: they paid for my post-secondary education at the Canadian College of Performing Arts, a prestigious performing arts school in Victoria, B.C.. It was there that I discovered my love for acting.

When I was in my mid 20’s I met Catharine Falcon, an incredible person and successful casting director for production companies like Hallmark, Lifetime, Paramount, and others. She saw me teaching a workshop and wanted her daughter to train with me. That was a big deal; she’s a big name in the industry.

Catharine brought me over to her studio, Studio 3 Media, and promised me when the day came, I could take it over and run everything on my own. Sure enough, she kept that promise, and a few years later the LeBlanc School of Acting was born.

A lot of high stakes things started to happen to us recently. We have a LeBlanc student, Skywalker Hughes, on one of the biggest shows right now in Alberta, Spectrum’s “Joe Pickett,” as the lead role of Sheridan Pickett. One of my other dear students, Sebastian Billingsley-Rodriguez, was flown to Newfoundland to play Nibs in the upcoming Disney+ “Peter Pan and Wendy” alongside Jude Law who plays Captain Hook. LeBlanc student Emily Mitchell landed leading roles in “Ordinary Angels” starring alongside Hillary Swank and the “Out Of My Mind” Disney+ Movie Adaptation. We have the “Riverdale” five—five actors on the show were trained LeBlanc students in iconic roles. There are not a lot of youth that are cast in the show for the bigger roles. That’s not a coincidence, that’s what I call a “LeBlanc-idence.” I don’t want to keep name dropping, but I want to highlight our volume of success.

I teach my students real-world tools, techniques and life skills such as confidence building, public speaking, teamwork skills, and emotional intelligence, things you can’t find in a normal acting school.

Before the pandemic, we grew to over 100 in-person students, with students traveling from all over to take part in our Vancouver summer program. We were one of the first schools to actually launch our program online when COVID-19 hit. In April, we went pedal to the metal. We were hearing from a lot of parents saying their kids were bored and scared, and I wanted to give them some hope, so that when the film and TV industry came back, they’d be ready to roar.

In our first online term, we had over 100 people. We’re growing quite a bit of online presence in Montreal now and we already have over 100 online students in Ontario alone. Even our UK division, which started at the start of COVID-19, started with 10 students, and now there are over 100.

Parents of working actors still send their kids to LeBlanc, because even if you’re a lead role on a show, you can still level up. Just this summer, actress Coco Day of NBC’s “This is Us” trained with us for an online technique workshop. Some other American students who have come to us are: Ayush Arvin of Netflix’s “Waffles + Mochi” starring Michelle Obama, Bentley Williams of Netflix’s “Stranger Things” and Bryson JonSteele of ABC’s “Station 19,” to name a few.