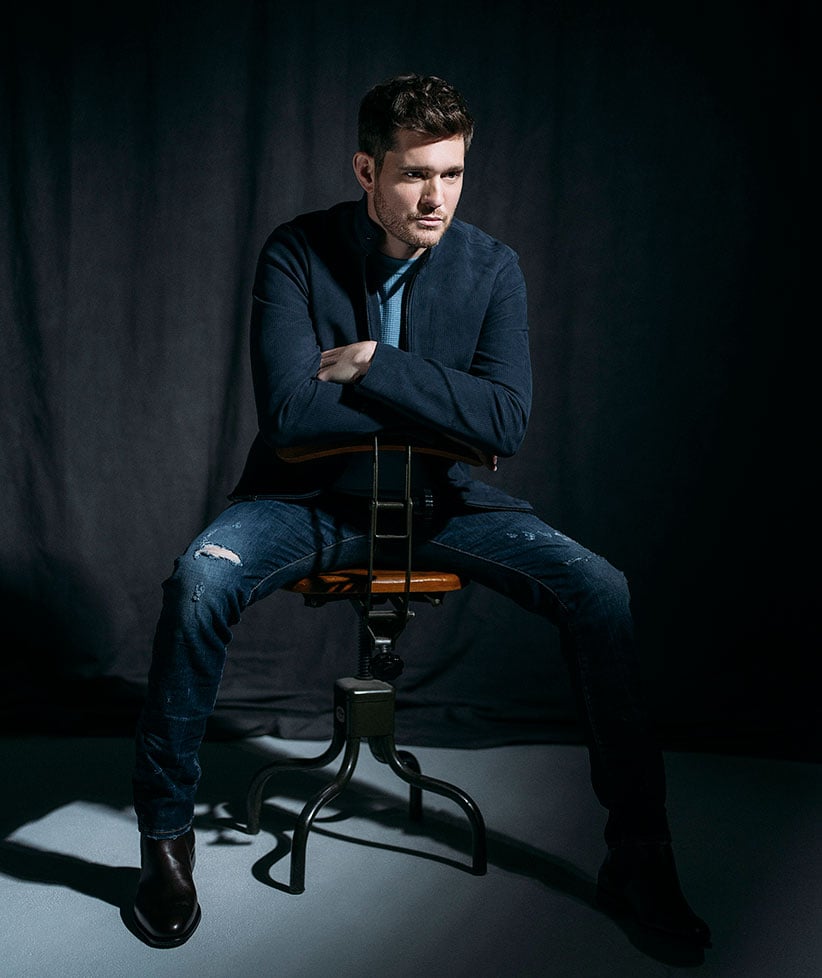 Every time Michael Bublé steps on stage, his performance seems to work on at least two levels: He’s completely serious about emoting sentiment through song and yet is just as comfortable serving his audiences a strong dose of kitsch for the sake of a laugh. It is a self-effacing gift, he says, one he lifted from “the greats”—the Rat Pack performers of the 1960s who helped keep jazz and swing alive in the mainstream. In fact, the B.C.-born singer-songwriter-performer and perfumer (Bublé just launched his first fragrance, called By Invitation) has spent much of his musical career in homage to those who came before him. This could be one of the reasons why he was once called “a human jukebox” and “the world’s greatest wedding singer” by American music critic Will Friedwald.

Clearly, Bublé’s formula for covering classics has worked. At the age of 41, he can be counted as one of the only singers in Canada to sell more than 32 million albums worldwide. Yet beyond the accolades and the old-school showmanship lives a hidden artist that Bublé is reintroducing to his fan base. His new album (out Oct. 21), Nobody But Me, hints at such creative ambitions, especially with his collaborations with Meghan Trainor, One Direction’s Harry Styles, and Black Thought—the rapper for the Roots. Here, he talks about his current career recalibration, which was spurred on by politics, parenthood and social change.

Q: You’ve done extremely well without a whole lot of radical reinvention. How does this new disc showcase your evolution?

A: A lot of artists talk about getting out of their comfort zones and being the most proud of their newest album. But it is true for me. I rethought a lot of what I do. A year and a half ago I was reading a Time magazine interview with an author named Brené Brown. She said, “People that fail seem to ultimately do the same thing they think works over and over again.” I had an epiphany and called my manager and started a creed with my producers. I promised we’d do whatever was best for the song and the album—no ego would get in the way. After they were done—instead of being precious with the songs—I brought in producer Johan Carlsson [Ariana Grande, One Direction, Flo Rida] and asked, “Can you make this better?” And he did. Sometimes being an artist means knowing when to let someone see something in you that is there that you can’t hear or see.

Q: Out of all the singers your grandfather introduced you to as a kid, Dean Martin has ended up being the artist you feel closest to. Why?

A: He’s my favourite out of everyone because there is a grace that he brings. What he did seemed so effortless. I believe he’s underestimated as a vocalist only because it seemed like what he was doing looked easy—but it isn’t and it stands the test of time. He had this really wonderful rich, authentic, distinct vocal style. His humour in movies [and] the self-deprecation and the coolness he had could overshadow what a marvellous vocalist in the Great American Songbook he is.

Q: Do you feel that happens with you sometimes?

Q: At what moment in your career did you feel those comparisons began to die?

A: I honestly think that it was when the actual voices started to stand up for me. It was the iconic artists like Tony Bennett or Barbara Streisand or Liza Minnelli. When people like that take you under their wing and say in quotations, “He’s the next one. He’s got my stamp of approval,” people trust them.

Q: Streisand is notorious for her issues with stage fright, insecurity and perfectionism. Is this something you share?

A: I struggled more with my identity. Let’s be honest—early on in my first records, I didn’t have the power to tell David Foster or other producers what to do. When we decided we were going to record “Come Fly With Me,” I would say, “Who’s going to arrange it?” The record company, the management, the executive producers and people who’ve invested in this horse and the race—would say, “We like the Sinatra version.” They would say, “Everyone knows that arrangement. Everyone likes that arrangement.” This was before I’d written a hit song so I didn’t have any of that weight to throw around. I’d say, “I’m not comfortable with that. I want to have my own arrangement, my own spin, my own take on that song.” But I did it Frank’s way.

Q: Did you finally get autonomy sometime after your debut?

A: Yes, but not on the first record. I was told I could do that on my solo record—my second album—which was a joke everyone always tells. Their idea worked, though. As I look back, I understand what [the record company] was getting at. They were trying to market a record and make it as commercially acceptable as possible. It hurt me and my credibility with critics. I met the Sinatra family for a [performance] I did for his hundredth birthday and one of the first things Sinatra’s daughters said to me was, “I’m so glad you make your own beautiful arrangements now.”

Q: One of the covers that really stands out on this new disc is your take on “God Only Knows” by the Beach Boys. It got fully rearranged. Why take such a risk with such a beloved song?

A: I knew it was dangerous to toy with—which is why I did it. I went to Bill Ross to arrange it—he conducts the Academy Awards and just worked on the new Star Wars films. I knew it was intimate and honest once we cut it. When I went into the studio [to record it], I asked the engineers to shut off all the lights. We were in the dark. I turned on my iPhone so I could see my screensaver—which is a picture of my kids. I put the phone on the music stand and sang to it. We did one take. I’ve never done that before. We recorded the strings in the room Brian Wilson recorded Pet Sounds.

Q: Brian Wilson told me some of his music was about escaping his father’s abuse and creating another reality. For you, is singing more about forgetting the world you’re in or is it about addressing the world?

A: I can’t sit and compare my trouble to his but I came from a blue-collar family of fishermen. Music was an escape and a way for me to dream of better things and a better place to be. Let’s just say I was an insecure, scared kid.

Q: When you are embarking on new projects such as your new fragrance, how do you decide when you’re the boss or the employee when working with experts?

A: It’s innate. I like my job but it’s not who I am. Who I am is a dad and a family guy. When I look in the mirror and talk to myself, that’s what I want to reflect.

Q: In a 1963 Playboy interview with Frank Sinatra, he unabashedly talks about his major concerns with organized religion. People never thought of him as progressive. Did you always feel he was?

A: I never thought about it. To be completely frank—pardon the pun—the conversation this has turned into is far more interesting than speaking about my record or my fragrance or any other product or marketing. I’m fascinated by politics. I love watching everyone from Neil deGrasse Tyson to Lawrence Krauss to people like Richard Dawkins and Noam Chomsky on YouTube. Christopher Hitchens is perhaps the greatest orator ever. He’s such a famous atheist. As I’ve gotten older and the world has gotten far more complicated . . . I’m more knowledgeable of how complicated it’s becoming. Through all of this injustice, I can only hope that at least I can communicate about it.

Q: So it has become important to you and your work?

A: Yes. The fact that there’s a more open discussion about everything from feminism to racism . . . I look at my two boys . . . this is their future I’m talking about. When I’ll be long gone, it’ll be them and their kids. I know that sometimes the darkest times are followed by the lightest. Sometimes bad things have to happen for good things to happen. At the very worst, we’re having very open discussions, discussions about things we didn’t even know f–king existed. I talk to my friends about it and they are absolutely shocked. They didn’t even know.

A: I do. I’m not talking about just Donald Trump’s politics—it’s what he’s brought up. It’s a real conversation. We’re just people trying to fall in love as nations and human beings. We need therapy, man. The world does.

Q: In a recent interview, you said if you could overturn any law, it was laws banning same sex marriage. Why?

A: There’s a deeper issue there. It’s prejudice. I was so lucky. I had a dad and a mom that loved me and my sisters so much. My Uncle Mike and Uncle Frank were married. They must be together for fortysomething years now. Long story short, there was never any stigma attached to that. At the youngest age, I remember my dad saying, “Sometimes men love men and women love women. It’s nature.” I look at my little ones and I love them so much. I think to myself, “By God, if my son is gay, it’s not that he was turned or learned into it. My son, his soul, the way he was born . . . this is him.” If he had any pain in feeling that he couldn’t express to me, that would hurt. A lot of these subjects blend into the same thing: intolerance. When you’re a little kid, you don’t know that it’s going to get better. Your life experience hasn’t told you that. I want to protect those people. I want to send out a message and at least try to get that across.

Q: New tracks such as “I Believe In You” are songs you have called “a tent in the rain in this crazy world.” Do you hope some of your music will be part of the much-needed change?

A: I don’t expect them to magically fix things. They’re a Band-Aid on a boo-boo. I love that I’m able to take people away just for a little while. Even if they come to my show and it’s an escape from taxes or heartbreak or a shitty workplace experience—all those human beings I get to sing for laugh and emote with give me more happiness than I could ever give them. On social media and [in person] I hear stories of how a song like “Home” helps. Whether it’s a guy overseas coping with missing his family or something deeper and terribly dramatic. Somebody once told me that [“Home”] is the song they listen to when they go to the cemetery to visit their child that passed away. It gives them hope. At the end of the day, that’s all what I want to offer people.