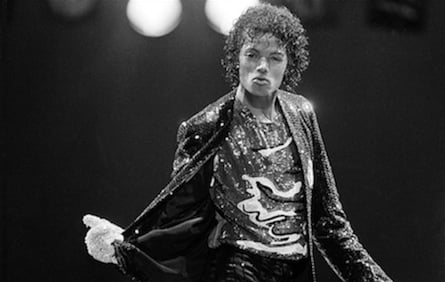 Live in the Situation Room, Wolf Blitzer addressed the nation. Michael Jackson, he said, was dead. Or at least that’s what other outlets were reporting. CNN was still working to confirm Jackson’s demise.

Blitzer consulted with a reporter known for his coverage of Jackson. They debated the precise level of shock to assign this development. Another reporter, this one having been to Neverland, mentioned Princess Diana. Blitzer introduced a 30-second clip of Jackson performing as a boy, then CNN’s “chief medical correspondent” was brought in to explain what happens to the body when it goes into cardiac arrest. A discussion of Jackson’s weight ensued. Blitzer stressed the need for heart defibrillators to be more readily available to the public. Another correspondent was brought in to find some irony in Jackson’s death coming just as he was to relaunch his career.

“It’s almost something out of a TV movie,” he sighed.

There are, of course, comparisons—Elvis, Marilyn Monroe, Elizabeth Taylor, Charlie Chaplin, Babe Ruth, Muhammad Ali, The Beatles, Princess Diana. Michael Jackson did not pioneer the concept. But in a world that demands extremes, he exceeded all limits. Even by the outlandish, often unspeakable, standards of the giants who came before him, he seemed otherworldly. He existed on a plane of his own. If he were a fictional character, he would’ve been read as a satirical send-up of the very idea.

The freakishly talented, ultimately damaged, child star. The singer of some of pop’s greatest hits. The best-selling album of all time, Thriller. Nineteen Grammy awards. The moonwalk. The crotch-grab. The white glove. The high voice. The revolutionary music videos. The tabloid stories about a hyperbaric chamber and the Elephant Man’s bones. The pet chimp named Bubbles. The fire on the set of a Pepsi commercial. Neverland. A video game. A sci-fi, 3D-movie directed by Francis Ford Coppola. Going to the Grammys with Brooke Shields and Emmanuel Lewis. We Are the World. AIDS and Africa and feeding the children. The messiah complex. The military uniforms. Floating a 30-foot statue of himself down the Thames. The plastic surgery. His skin turned pale, his face twisted. There were two marriages—one to Elvis’ daughter, Lisa Marie. Three kids, one nicknamed Prince, one dangled over a hotel balcony. Allegations of pedophilia. Rumours of drug abuse, eating disorders and mental illness. A trial on charges of sexual abuse. Exile in Bahrain as the guest of a sheik. Turning up at James Brown’s funeral to honour his hero, flirting with a comeback in Las Vegas. In preparation for his return to the stage in London this summer—a string of 50 sold-out concerts that would see him perform before more than a million people—he was apparently working out with Lou Ferrigno, the bodybuilder most famous for playing the Incredible Hulk in a short-lived television series.

That’s the short version. A worthy recounting would require a dozen volumes, each of which would no doubt be devoured by the hordes who are apparently gathering tonight outside the hospital in Los Angeles where Jackson now lays.  As I type, Al Sharpton’s telling a news conference that Jackson is one of America’s great racial trailblazers. “I hope Michael will get the respect he is due,” Sharpton is saying.

The respect he gets will be the respect he sought, the respect that is implicit in attention. No one did more to attain it. No one held our gaze like him. It is difficult, perhaps scary, to imagine how someone might do it better.

“We will never see his likes again,” Larry King is saying.

Up next, Cher and Celine Dion with their reactions. After that, days, weeks, months and years trying to make sense of what we’ve seen. One last, long tribute and testament to his particular kind of genius.