At 83, the innovative Canadian art icon is fine-tuning his latest project: a 65-storey light show 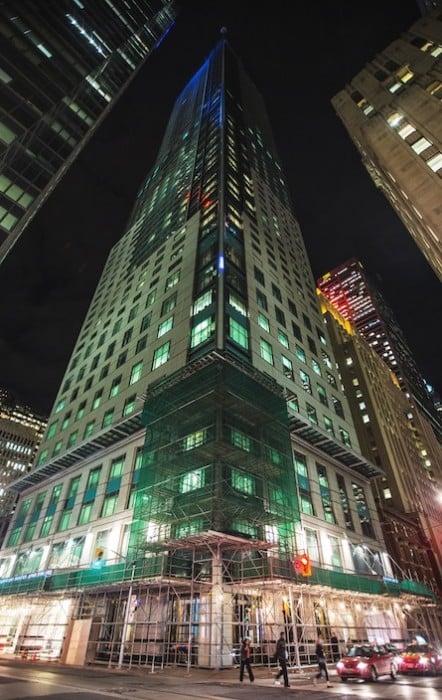 Michael Snow is standing on the edge of In the Way, his new video installation at the National Gallery of Canada, looking down at it and chuckling with pleasure. A projector on the ceiling beams a 23-minute video onto the floor. The ground rushes by at close range—mud and puddles for a while, then grass studded with flowers, then pebbles. Snow created the video by driving over cottage roads with a camera mounted on the back of a truck, aimed down. Both the speed and the direction of the movement change every so often. As if afraid they’ll fall in, gallery visitors passing by skirt the action on the floor carefully, a reaction Snow seems to relish. He also likes the sheer look of it. “These rocks,” he exclaims at a point when the terrain switches from grass to rough ground. “I really like these rocks.”

Snow, 83, was in Ottawa last week for the opening of Builders, a new show of about 100 works by contemporary Canadian artists the gallery has bought during the past two years that is intended to draw attention to artists who have helped establish the art scene. “I can’t think of a bigger builder than Michael Snow,” says curator Jonathan Shaughnessy. “He’s a model for Canadian artists, constantly innovating.” Indeed, Snow has painted and sculpted, photographed, filmed and videotaped and played experimental music for about six decades. Venerable as he is, he’s never been more relevant than he is now: sometime within the next few weeks, Snow’s most inescapable public piece will debut on the downtown Toronto skyline.

This latest audacity is a narrow strip of LED lights, programmed to do his bidding, that runs up 65 storeys of the new Trump Tower. He worked for two years with computer programmers from Edinburgh to create the permanent installation, an array of white-light effects that will play every night. “There are some that use rhythms,” he says. “A very simple one that’s very effective is a waltz. It’s like 40 storeys go boomp, and then the 20 storeys above it go boomp-boomp. So the building waltzes. And there are many things more complicated than that, like snow and rain effects.” Snow expects it to be activated in the next few weeks, after some technical kinks are ironed out. He and his collaborators have already tested it while watching from a nearby 30th-floor hotel room. “It’s not oppressive,” he promises. “But you will not be able to miss it.”

In his hometown of Toronto at least, Snow has long been hard to miss. His monumental sculptures of fans greet real crowds at the entrances to the Rogers Centre. His iconic flock of life-size Canada geese still cause shoppers visiting the Eaton Centre to crane their necks for a better look. But his popular impact hasn’t come at the expense of his reputation among art-world insiders. Last year he had shows in Paris, New York and Istanbul. A retrospective of his abstract sculpture at the Art Gallery of Ontario in Toronto wraps up next month. A survey of his photography is slated for next year at the Philadelphia Museum of Art. Asked how he finds the time to work on new pieces, he laughs and says, “I make art hardly at all. What I do is email and travel.”

Spry and active as he is, Snow’s age and personal history matter. As an experimental filmmaker and video installation pioneer going back decades, his perspective on those key streams in today’s art is unique. This week, Toronto’s Power Plant gallery arranged for him to chat in front of a sold-out audience with Christian Marclay, 57, the Swiss-American creator of The Clock—a crowd- and critic-pleasing 24-hour video made up of thousands of clips from movies that show clocks and watches, all meticulously edited so the time shown on the screen is always the actual time of day. They are long-time friends and sometime collaborators. Snow praises The Clock for, among other things, making viewers aware of what he calls “the Sargasso Sea of images” generated by more than 100 years of filmmaking. What’s an artist to make of so much raw material? Snow has been swimming in the possibilities for 60 years, and shows no signs of losing his buoyancy.