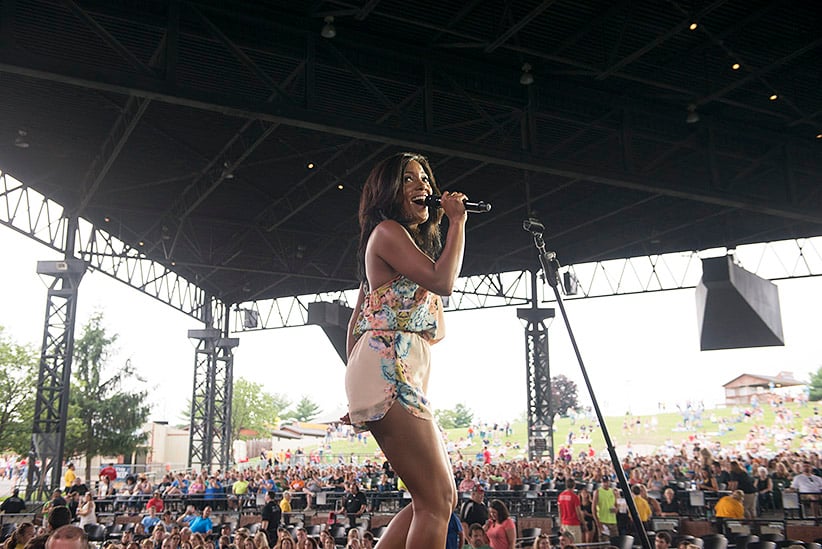 On the same summer evening that hears Barack Obama sing Amazing Grace to a grieving Southern congregation, a Northern stage is opened to an unexpected herald of heartbreak on a more private scale. She is Candace Mycale “Mickey” Guyton, 32, a big-voiced, small-town Texan on her ascendancy up the narrow—and often narrow-minded—stairway of American country music, belting booming songs of aching loss.

Summer storm clouds are hovering over an amphitheatre cut from the cornfields near the Pennsylvania-West Virginia state line. Dressed against the boots-and-Stetson trope in sky-high heels and flowery short-shorts, Guyton is twanging a plaint called Why Baby, Why? The song, she says backstage, was inspired by a real-life breakup that left her so shattered that “I went months without eating. I feel like it was a death.”

The fact that Guyton is African-American makes her, for better or worse, an anomaly in a musical genre historically embraced by an audience whom the writer Paul Hemphill once labelled as “poor, white, uneducated, conservative, hard-shell religious . . . baby-making, rabbit-hunting hillbillies.”

Guyton is a former department-store lingerie sales clerk who never has been stuck in Folsom Prison or been busted flat in Baton Rouge. She has, however, channelled Patsy Cline’s Crazy in the East Room of the White House, with Barack and Michelle Obama in the front row. But her Texas roots and pain-scarred soul are genuine, she avows.

Guyton swipes her cellphone to brandish photographs of cousins in 10-gallon hats, and paints herself as a tree-climbing, grasshopper-catching girl from the backwoods out past Waco, the descendant of generations of black women who—ignoring Willie Nelson’s famous advice—did let their babies grow up to be cowboys.

She is not the first African-American woman ever to try to make it big on Music Row. Linda Martell reached No. 22 on the country charts with Color Him Father in 1969, then left the industry. But Guyton, blessed with what the New York Times calls “an impressive voice that she’s using only half of,” may be the first to succeed.

“I am black, but sometimes I forget it,” Guyton says. “I’ve always grown up being the only black girl in the room. I’ve never grown up to see colour.”

The same cannot be said for country music itself, though it is extremely unlikely that even the reddest-necked yodeller of 2015 is going to cover The Funeral by the late Hank Williams, a tone-poem recorded in 1952 that describes a black child’s coffin attended by “a sad, old coloured preacher,” who rose to his eulogy while “the simplicity and shrewdness in his Ethiopian face showed the wisdom and the ignorance in a crushed, undying race.”

It is equally doubtful that Mickey Guyton is going to joke about her “permanent tan”— as Charlie Pride, the Country Music Hall of Famer from deepest Mississippi whose Kiss An Angel Good Mornin’ was a No. 1 hit in 1972, used to. (Pride’s early albums did not include a photo of his “Ethiopian face.”)

Yet not even a decade ago, when an African-American woman named Rissi Palmer tried to gain traction in Nashville with a debut single called Country Girl, she suffered “a constant barrage of always having to feel like you’re proving yourself so that people know that you’re genuine.”

On the prairie west of Pittsburgh, Mickey Guyton’s heartfelt, seven-song set blares no such blatant claims. In a week when only two of the top 25 recordings on the Billboard top country hits chart are by female artists—Kelsea Ballerini’s plea that a boyfriend love her like he means it, and Carrie Underwood’s prayer that parents’ angry words could be as harmless as toy guns—Guyton forgoes both lust and rage in favour of painful throbbing in the Patsy Cline mould. Indeed, in her video for a plaintive waltz called Better Than You Left Me, she holds up a tinted photo of Cline in homage. On Why Baby Why she sings: “I can’t stop the hurt / Numb the pain / Cool the burn, kill the ache / No matter how hard that I cry, baby, cry.” 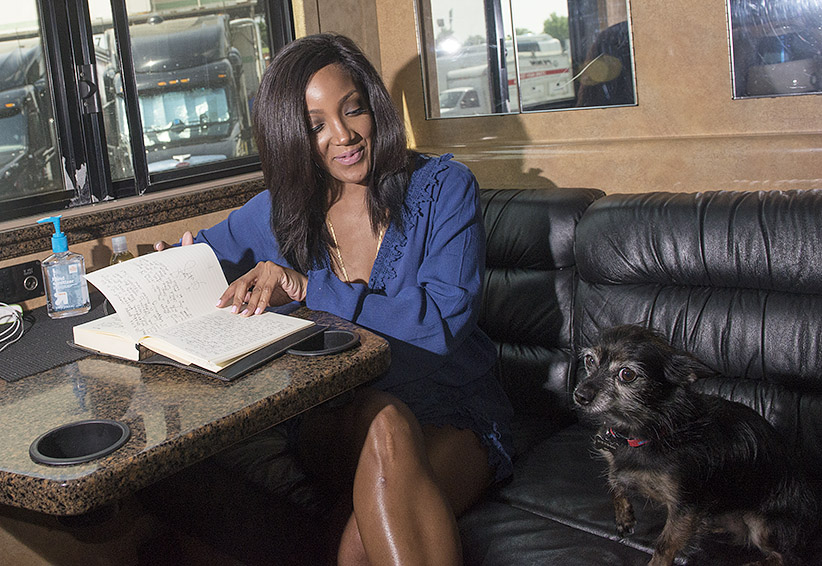 Guyton is the only woman on the bill. Still to perform are local boy Brad Paisley, who grew up 80 km away in Glen Dale, W. Va., with his bro-country odes to Bud Light and butterfly tattoos, and an Arkansan named Justin Moore whose souvenir T-shirts seethe deﬁance post-Charleston: “As long as I’m alive and breathing, you won’t take my guns.”

This is Paisley’s “Crushin’ It” tour, the A-list superstar at the summit; Mickey Guyton is getting her first big break as the opening act. The crowd at First Niagara Pavilion is estimated at 10,000. A quick census of the grounds reveals a population of 9,997 Caucasians and three African-American attendees.

It was Paisley, of course, who tried to address this chasm two years ago in a duet with rapper LL Cool J, entitled Accidental Racist—“If you don’t judge my do-rag, I won’t judge your red flag”—that Billboard called a “flat-footed apology for hate-induced uneasiness” and others dubbed “clueless,” “toxic,” and “the worst song ever recorded.”

“Race doesn’t matter,” affirms Amber Zorak, a Pennsylvanian who’s at First Niagara with her mother, when asked about Guyton and her place in country music’s monochrome spectrum. “It’s all in the way you sing. It’s all in the way you are. I sing Patsy Cline every time I do karaoke. Hell, I’m country and I’m from Pittsburgh!”

“With a black girl singing, you would think there would be a lot more black people here,” her mother, Debbie Paukoucek, says.

“They’re all into rap,” notes Zorak. “Country people can be racist,” she adds quietly. “Having her here might open a few eyes.”

Two young African-American women approach the seating area. They turn out to be university students from Washington, Penn., in the state’s southwest corner.

“Why country?” the women are asked.

“If I had to pick, I’d pick country over rap,” says Esperanza Patterson. “It doesn’t talk about females and their body parts. It talks truth and honesty.”

“I’m being musically diverse,” declares India March. “In the history of country music, it was usually for farmers, who were usually white people. But I feel like we all do the same things, feel the same way in our hearts.”

“Country music has become the music that best represents the reality of American life,” Brad Paisley once told an interviewer, but the reality on display at First Niagara is of self-segregated solitudes.

“If African-Americans would take to the country music,” says Debbie Paukoucek, “maybe the world would be a better place.”

In 1966, Charlie Pride told a silent and confused audience in Detroit, “I ain’t got time to talk about pigmentation all night” and went back to singing. In 2015, Mickey Guyton never mentions her colour from the stage. In a move that may be more revolutionary in today’s country music scene, neither do we hear her announce, as Grammy-winning country star Miranda Lambert does in her 2008 hit Gunpowder & Lead, that she plans to deal with an ex-lover by “goin’ home / Gonna load my shotgun / Wait by the door and light a cigarette . . . / I’m gonna show him what little girls are made of / Gunpowder and lead.”

“Mickey Guyton’s voice is stunning,” says Diane Pecknold, associate professor of women’s and gender studies at the University of Louisville, and an expert on the history of African-Americans in country music. “But she may face an extra burden just because the form of femininity that’s getting the most attention in mainstream country today is that sort of tough-talking, sassy, deliberately trashy country girl, and that’s a tough act for an African-American woman to pull off without triggering racist stereotypes—think Miranda Lambert, or the version of Carrie Underwood who swings the Louisville Slugger.”

It’s hard to think of the last country female singer who didn’t channel sassy or angry—maybe when Taylor Swift was “here the whole time,” but that was bubblegum, not about the adult pain that Patsy Cline sang about. “I think she actually may be in a good position,” Pecknold says of Guyton. “Her sweetness seems genuine, and may actually help distinguish her in a field of sassy, take-no-prisoners women.”

“I haven’t done ‘angry,’ ” Mickey Guyton explains backstage. “I don’t want to be that girl who hates everybody. I’m representing the everyday person in the year 2015—young people, old people, middle-aged people.”

“I write about heartbreak and I write about my life, and that’s what authenticity is. Everybody’s been so kind and accepting. Times have changed since Charlie Pride. We don’t have any kind of agenda to get me accepted.