How rare: Miley Cyrus, a female pop star unafraid of being ugly

In 2008, MadTV did a hilarious spoof of Disney’s hugely popular show Hannah Montana—the story of an average teenage girl named Miley Stewart (Miley Cyrus) who moonlights as a famous pop star. In the parody, Cyrus’s famously goodie-two-shoes character regales a friend at school with an uncharacteristically colourful tale from her double life: “Last night things got a little out of hand,” fake Miley says, mimicking real Miley’s throaty twang. “I was doing tequila shots with that fat kid from Two and a Half Men when my dealer shows up and says, ‘P Diddy, havin’ a party in Bel Air.’ Next thing I know Matthew McConaughey brought in a stripper and then we all do cocaine off her butt.”

Fast forward five years and the parody feels tame compared with Cyrus’s current lifestyle. This was the year the 20-year-old officially transitioned from mild-mannered, gaffe-prone country-pop singer into tawdry badass, with a new look, a new sound, and an outrageous performance at the MTV Video Music Awards.

In case you’ve achieved the impossible and managed to forget it, Cyrus sang her chart-topping party anthem, We Can’t Stop, while twerking vigorously on pop singer Robin Thicke in a flesh-coloured leotard, simulating oral acts on the posterior of a full-bodied African-American backup dancer (prompting charges of racism) and waving a gigantic foam finger. This was the first time MTV had to censor the star’s lyrics during a performance: We Can’t Stop references “molly,” a euphemism for the designer drug MDMA. (It was also, most likely, the first time the creator of the foam finger publicly denounced a person for “degrading” his invention.) Cyrus’s epic antics didn’t end there. In early November the singer groped a latex-clad dwarf at a European award show and smoked a joint on stage. The Parents’ Television Council, once a dear friend, is now a bitter foe. In the past year, Cyrus has gone, like so many fresh-faced female icons before her, from ultimate role model to mom’s worst nightmare. 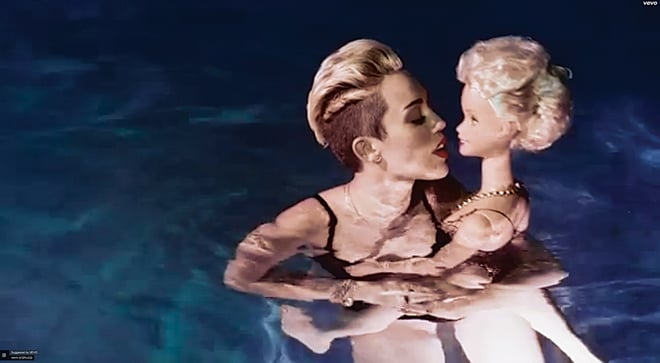 Miley Cyrus kisses a doll in a swimming pool in the music video for her song "We Can't Stop."

But unlike her Disney princess contemporaries, Cyrus has managed to occupy this role without caring whether or not we find her sexually appealing. She may be nearly naked and perpetually writhing, but she doesn’t look like a vixen. She looks like a banshee. Never before has a female pop star gotten so much attention for being so gauche, or to quote American academic Camille Paglia, so “clumsy, flat-footed, and cringingly unsexy.”

She twerks terribly in teddybear get-ups, wagging her tongue like a maniac. She straddles gigantic robots, swims with creepy dolls, and boasts about eating “burrito burgers” on late-night TV. None of this behaviour is sexually titillating in the least, something the star has no doubt come to realize at the expense of her cookie-cutter heartthrob fiancé, Australian actor Liam Hemsworth. (Rumour has it the couple split because of Cyrus’s recent transformation.) Her VMA performance may have nearly stopped the world from turning but it most certainly did not turn us on. And that’s unusual.

Cyrus is weird in a way that doesn’t always work, in a way that makes you feel like you’re watching an awkward performance at a high school talent show by a plucky Grade 9 student who “won’t stop” even if the entire school thinks she’s an outright freak. (In her own words: “Sometimes in life you just gotta decide to not give a f–k.”)  This kind of indifference to audience expectation may be unnerving, but at least it’s original.

In 2008 Katy Perry told us that she kissed a girl and she liked it, but she didn’t want us to think she liked it too much. What follows the very gay chorus in the singer’s breakout song I Kissed a Girl and I Liked It? A sobering qualifier, of course: “Don’t mean I’m in love tonight.” In 2004, Britney Spears was equally cautious crooning I’m a Slave For You in next to nothing—with an enormous boa constrictor wrapped around her neck. When pressed about the song’s sexual content she assured fans that she is a slave to “the music” and nothing else.

Cyrus doesn’t beat around the bush in this way. She gives no disclaimers or excuses. She doesn’t cower or tone it down when we at look her with revulsion and dumbfoundedness. The reason may be that Cyrus isn’t even trying to be a sex symbol. She’s just a weirdo.

The most surprising thing about this is that while she is completely unhinged on stage, she appears composed and together in the real world; she lives a few houses down from her parents and appears to make most of her own decisions. A candid profile in Rolling Stone this year offers a close glimpse into Cyrus’s life, one shockingly free from handlers and paid decision makers. You may not like what she’s thinking, but at least she thinks for herself.

The Parents Television Council, content with its placid Taylor Swifts and Hilary Duffs, may want to reconsider accepting Cyrus back into its fold. Girls have been sweethearts for centuries. Why not add a provocateur to the mix?